What the cult classic 'Point Break' can teach us about capitalism 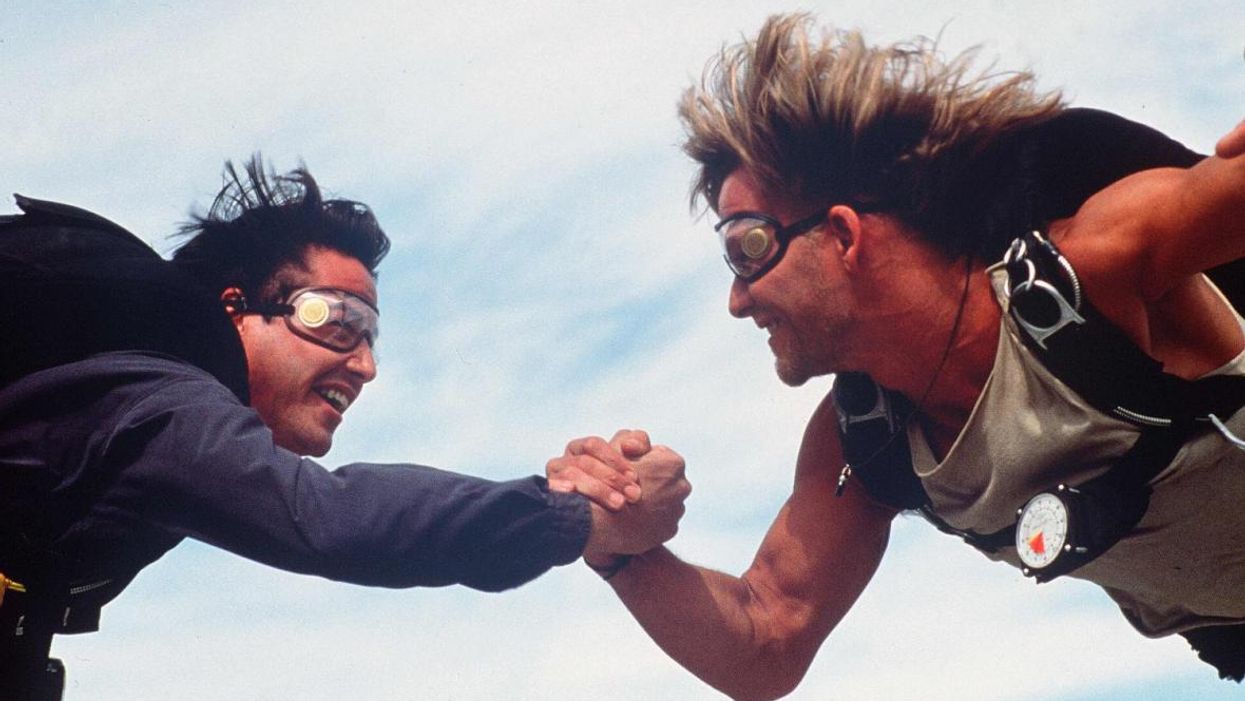 Directed by Kathryn Bigelow, the cult classic Point Break follows Johnny Utah (Keanu Reeves), an FBI agent who infiltrates a band of bank-robbing surfers led by Bodhi (Patrick Swayze). Though Johnny is undercover, he gets romantically entangled with Tyler Endicott (Lori Petty) and comes to see the spiritual side of the group's lifestyle—beyond surfing, partying and chasing an endless summer. But when Johnny's cover is blown, the situation spirals out of control leading to the demise of the Ex-Presidents, the death of Johnny's partner (Gary Busey) and Johnny throwing away his badge.

As a child in the 90s, Point Break was an exciting procedural drama. The surfing, bank-robbery, sky-diving, explosions, romance and betrayal made it one of my favorite films of all time. What I found the most endearing was the relationship between Johnny and Bodhi. They are opposites but both contain bits of the other—Johnny a hotshot who craves more freedom and Bodhi a free-spirit guru who provides the structure for his group. Tyler tells Johnny that he and Bodhi share the same "kamikaze" look.

My adult-eyes see the political commentary of the film—specifically the tensions of toeing the line between anti-state and anti-capitalist critiques, and its reasserting of these things.

Watching Point Break during the Covid-19 pandemic adds renewed intensity to the film's messages. Millions of Covid-19-related deaths around the world have forced us to wrestle with our mortality. Being stuck at home, we've slowed down enough to collectively ponder what we want to do with our lives. Even in the midst of economic hardship, people are leaving their jobs or refusing to take positions they don't truly enjoy. It's hard to watch Point Break without thinking that we should be more like Bodhi—living free and searching for what truly inspires us sans the bank-robbery.

But 30 years later, my adult-eyes also see the political and philosophical commentary of the film—specifically the tensions Point Break has in toeing the line between anti-establishment, anti-state and anti-capitalist critiques, and its reasserting of these things. In some ways, these surfers reject one cage for another—the mundane, often unfulfilling and sedentary, life of the worker for the adrenaline-filled endless run.

Bodhi and his friends rob banks dressed as the ex-presidents Richard Nixon, Ronald Reagan, Lyndon B. Johnson and Jim Carter. The business suits and rubber masks are satirical—the contrast between their carefree surfer lifestyle and the oppression of politicians and their corporate partners. In one scene, Bodhi, wearing the Reagan mask, jumps on the counter to introduce the Ex-Presidents, yelling "We've been screwing you for years, so a few more seconds shouldn't matter, now should it?"

It's interesting to see Bodhi take the lead as Ronald Reagan, who in many ways is the antithesis of everything he and his crew stand for. Though it was released in 1991, the film's development started in 1986 while President Reagan, a key figure in adopting neoliberalism as the dominant social and economic reality of the United States, was in office. Free market reforms, hyper-individualism and the defunding of public institutions placed all the ills of society and the burden to correct them on the individual. The Ex-Presidents see this theft of life and liberty as a non-partisan pursuit, as the four presidents are split evenly between Democrats and Republicans.

Bodhi (Patrick Swayze) says that its "us against the system, the system that kills the human spirit" while becoming a part of the system. Bank-robbery could be seen as subversive on its face, but it further justifies the force of the state.

Bodhi's crew are resentful of politicians whose greed, corruption and fealty to capital flatten the worth of humans down to their economic worth. By robbing banks, they are punching back against the parasitic overlords of Washington and Wall Street controlling the lives of the commoners, who are confined to work their life away doing a job they don't like while someone else enjoys the fruit of their labor. Bank-robbery and their surfer lifestyle reinforce each other as a rejection of the status quo.

But ironically, the Ex-Presidents accept the free-market, dog-eat-dog logic of the system they purportedly oppose. Phrases like, "Why be a servant to the law when you can be its master?" from Bodhi give up the game. Instead of fighting against forms of hierarchy, Bodhi merely means to reconstruct it for himself. The audience is told the Ex-Presidents are a group with no leaders, yet Bodhi is clearly the figurehead in their mini-corporate structure. What he says goes, no more or no less than a governor or CEO. Bodhi asserts that its "us against the system, the system that kills the human spirit" while, in a sense, becoming a part of the system. Bank-robbery could be seen as subversive on its face, but it further justifies the force of the state. The Ex-Presidents are merely replacing greed that oppresses with greed that liberates, which ultimately accepts the logic of the system. Ultimately, they reject the means, but not the ends.

This reminds me of Mark Fisher's Capitalist Realism in which capitalism has become so ingrained in culture we can't imagine alternatives. Bodhi and the Ex-Presidents fail to recognize the paradox, where, to borrow Fisher's words, "even success meant failure, since to succeed would only mean that you were the new meat on which the system could feed." In this sense, the importance of money is not dismissed, but rather, recouped from the onset. The crew reject the expectations of society (working a nine-to-five, settling into suburban life, starting a nuclear family), and yet accept (more fully than the average worker) the power money has in providing them the life they want.

To reference Slavoj Žižek, the Ex-Presidents maintain a cynical distance between their beliefs and actions—the world has made them justifiably cynical yet their misdeeds aim to reflect it back at the world, not dismantle the system producing cynicism. They aren't Robin Hoods. They're in it for themselves. Their aim is not redistribution, but accumulation. To repurpose Fisher's paraphrase of Žižek, the group, like so many of us in a capitalist society, disavows the idea that money is worth more than humans, yet they treat money as if it "has a holy value. Moreover, this behavior precisely depends upon the prior disavowal—we are able to fetishize money in our actions only because we have already taken an ironic distance towards money in our heads."

Point Break's ending is tragic for literal and metaphorical reasons: Bodhi (short for Bodhisattva, or someone walking the path toward enlightenment) dies riding a massive, un-rideable wave. But for him, purpose and money become synonymous. It's comedic that the guru never stopped to ponder this disconnect. Johnny realizes he no longer wants to be an agent of the state (which he only became because his NFL dreams were shattered) after seeing or taking part in the deaths of several people.

Point Break sets up a binary, two sides of a never-ending game.

But Bodhi was right about one thing: in this game, we all lose.