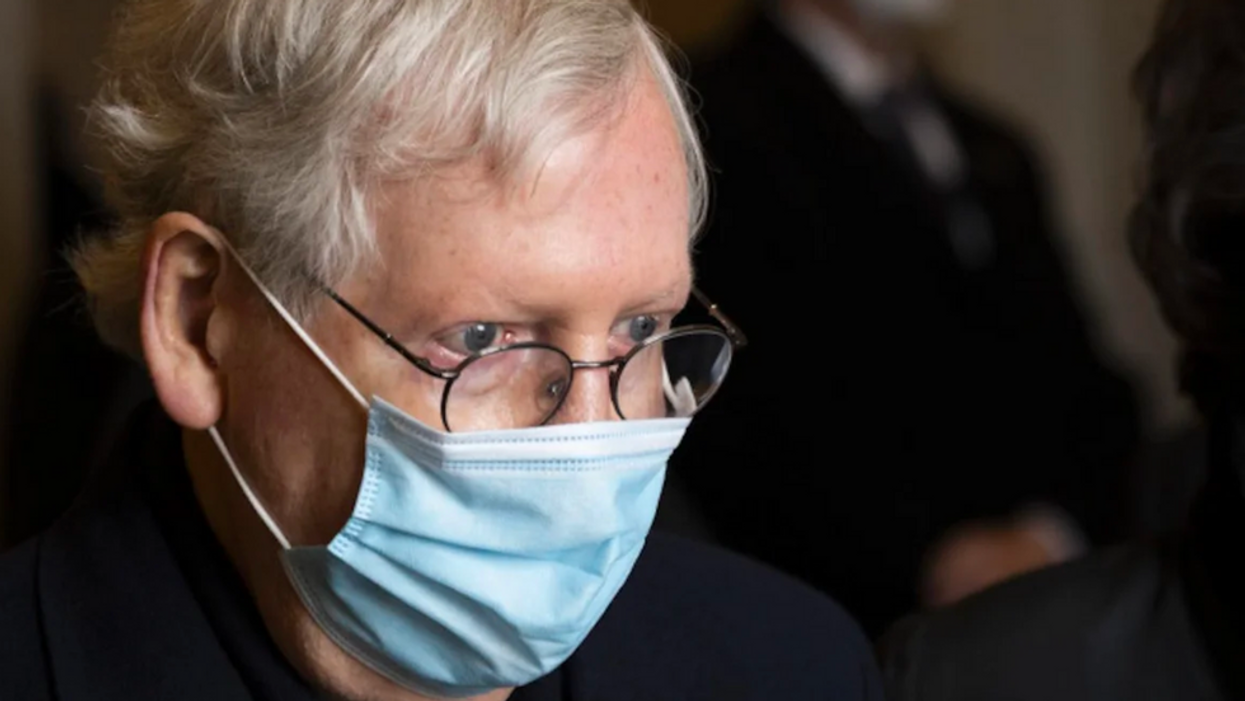 On Wednesday night, the Beltway press was abuzz with excitement at the announcement of a $1 trillion infrastructure deal made by Senate Democrats, Joe Biden's White House, and a handful of Senate Republicans. No, not because it's a well overdue investment in American infrastructure that has been crumbling from decades of neglect. The political press cannot be bothered with mundane concerns as "what Americans actually need" and "the continuing economic health of the nation." The main reason for all the elation was that the bill is bipartisan. (Cue gates of heaven opening, a chorus of angels singing.) When Democrats are in charge, bipartisanship is not only the singular obsession of the Beltway media but seen as exclusively the duty of Democrats to uphold.

"Biden ignores the 'shiny objects' and nears a bipartisan win," gushed Politico's headline. In the article, the bill is described as "the type of bipartisan win he's dreamed about since launching his campaign for the presidency." Other Democratic leaders are portrayed as optimistic that the bill can "fulfill Biden's campaign promise that he could work with GOP leaders even as they vowed to kill his agenda."

The whole thing is surreal, and not just because it comes the very day after grim hearings in the House about the January 6 insurrection incited by Donald Trump, a man who those GOP leaders Biden is so keen on working with continue to support. It's that this is all happening against a backdrop of impending doom for not just the Democratic party's future, but for democracy itself. Republicans in state legislatures continue to quietly line things up so that Donald Trump can steal the 2024 election from Biden, through a combination of voter suppression, gerrymandering, and changing election laws so that Republicans can simply void out election results they don't like.

Meanwhile, Senate Democrats are standing by and letting it all happen.

Democrats could, if all their Senate members wanted, pass bills that block all the movement in state legislatures to grease the wheels for Trump to steal the 2024 election. Bills like the For the People Act would kneecap most, if not all, of the slow-moving coup that Republicans are arranging for the 2022 and 2024 cycles. But those bills keep getting filibustered by Republicans, who don't want small things like "voting rights" and "free and fair elections" to get in the way of their plans for permanent one-party minority rule. Senate Democrats could, in theory, overturn the filibuster and start passing bills to protect democracy. Unfortunately, some centrist Democrats — most notably, Sen. Joe Manchin of West Virginia and Sen. Kyrsten Sinema of Arizona — refuse to provide the votes necessary to end the filibuster. Their reason? That familiar belief in "bipartisanship" and an apparently bottomless faith that they're one happy hour with Republicans away from hammering out a deal that will make Republicans suddenly start caring about preserving democracy.

More sensible Democrats on Capitol Hill have been pressuring Manchin and Sinema to wake up and see that "bipartisanship" is a joke. Republicans not only block everything they can, but the GOP, under Trump's leadership, is becoming increasingly anti-democracy. Efforts are being mounted to get these two to embrace some kind of filibuster reform that would, at least, make it harder for Republicans to stop voting rights bills.

But the passage of this bipartisan infrastructure package is likely the last nail in the coffin of any hope that Manchin or Sinema would seriously consider filibuster reform.

Both Manchin and Sinema have been at the center of negotiations for this bill, and no doubt their already massive egos are quadrupling in size, fueled by the belief that they are proving their critics wrong and that "bipartisanship" is totally a real thing that they are totally capable of achieving.

There's been some wonder in the Beltway press at the fact that Senate Minority Leader Mitch McConnell, R-Ky., who is the architect of the Republican strategy of using the filibuster to obstruct every piece of meaningful Democratic legislation, not only allowed this deal to go forward but even voted himself to allow debate. But it really should be no surprise, as this deal is all upside for McConnell.

For a mere $1 trillion, he gets insurance against Manchin and Sinema ever changing their minds about the filibuster. By tricking Manchin and Sinema into believing that the filibuster needs to stay put, he blocks any future possibility of meaningful voting rights legislation, ensures that voter suppression and gerrymandering will squeeze Democrats out of power on what may be a permanent basis, and helps pave the way for Trump 2024. Plus, McConnell gets some roads and bridges that Trump can start taking credit for starting in 2025 — just after he's inaugurated.

Already, the illusion that Republicans are people who can be worked with is paying off dividends for the right. Sinema is already making noises about how she can't back the larger $3.5 trillion infrastructure bill that Democrats have been planning to pass through a party-line budget reconciliation vote, which is their rare chance at skipping a GOP filibuster altogether. McConnell is ecstatic at how much he has Sinema in his pocket, flattering her as "very courageous," no doubt so she will continue to do his bidding by obstructing progress in the name of "bipartisanship."

Yet plenty of Democrats are full of praise for Biden's supposed wizardry at the bipartisan negotiation thing.

"Maybe professional politicians are actually good at politics," Sen. Brian Schatz of Hawaii told Politico, gushing over Biden. Transportation Secretary Pete Buttigieg said that "it turns out that decades' worth of expertise and relationships and pattern recognition are really helpful to getting a big result like this done."

But the pattern that is not being recognized is how Republicans are singularly focused on amassing as much power as possible without having to answer to voters. By letting this one bill get through, and propping up the illusion that "bipartisanship" is real, Republicans just bought themselves assurance that more important bills, such as the For the People Act, will never pass.

Let's be real: The person who really showed his experience and chops here is Mitch McConnell, who once again outmaneuvered Democrats and got his party closer to their long-term goal of permanent power without having to win free and fair elections.