The Supreme Court just backed Kyrsten Sinema into a corner 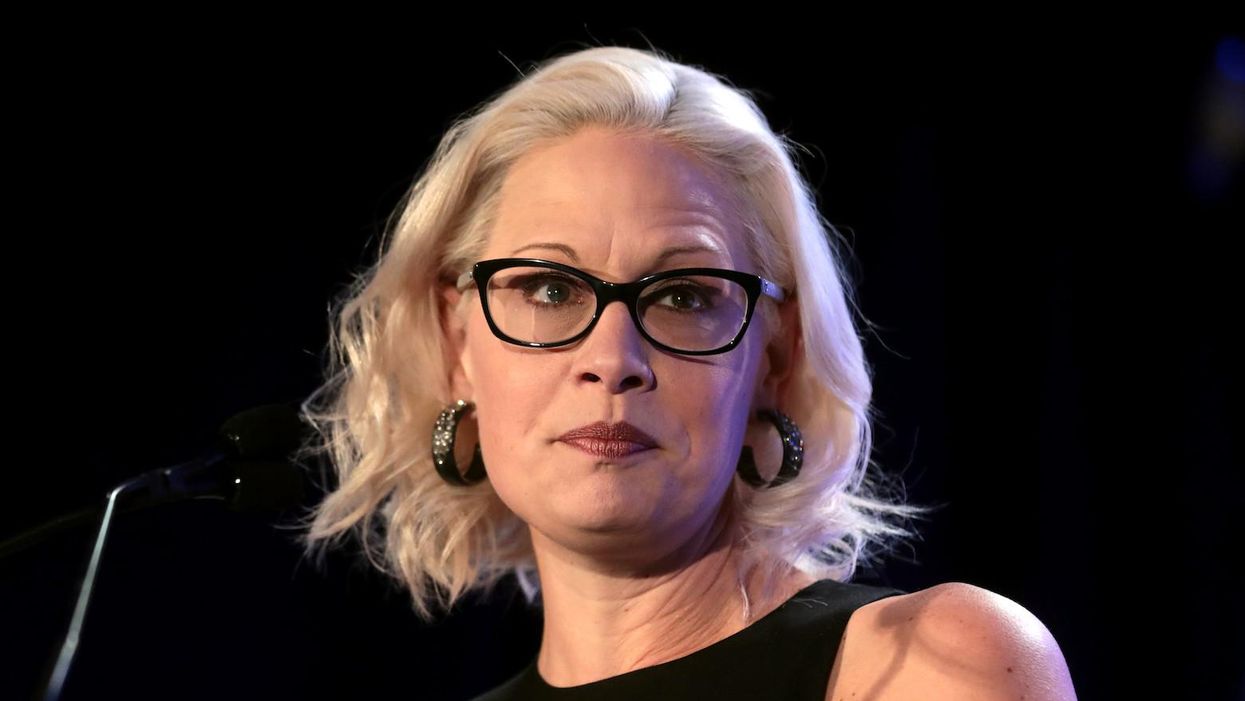 Is Kyrsten Sinema a troll?

There's been disturbing signs in the past that the senior senator from Arizona gets cheap thrills by provoking outraged reactions from her fellow travelers in the Democratic party. Most notably, of course, there was the time Sinema threw a cute little cursty while voting against a minimum wage raise she claims to "support," predictably drawing thousands of angry responses. She then released a photo provoking large swaths of Democratic voters at the height of their anger at her unwillingness to vote to end the filibuster Republicans use to block all meaningful legislation. In the photo, Sinema is seen flashing a ring that reads "f*ck off" with a smile. And then, in a move any 4chan user would envy, she dramatically increased the rage-sputtering on the left by declaring it "sexist" to be mad at her for any of this.

Sinema again pulled her signature gaslighting move — piously claiming to support legislation while actively blocking it — after the Supreme Court upheld a racist voting suppression law in her very own state on Thursday:

Here is a statement from @SenatorSinema today on the SCOTUS ruling that will now allow for greater minority disenfr… https://t.co/i6FCNOGFeX
— Amee Vanderpool (@Amee Vanderpool) 1625167618.0

Again, it's worth wondering if Sinema is simply trolling here.

She knows full well that Republicans unanimously blocked voting rights legislation from even being debated in the Senate just last week. She also knows she and Sen. Joe Manchin of West Virginia are the only two Democratic senators who refuse to strip this near-absolute veto power away from Republicans. Being a co-sponsor of the bill is a meaningless gesture when she is the person keeping voting rights bills from even being debated in the upper chamber.

Forget about the high-minded talk about saving democracy or protecting voting rights, what's really weird here is that Sinema isn't worried about Republicans openly trying to cheat her out of winning re-election in 2024. By refusing to budge on the filibuster she is refusing to do what's needed to save her own seat.

The law that the Supreme Court upheld is a 2016 Arizona law banning ballot collection and the use of provisional ballots. As the New York Times editorial board pointed out, lower courts found "clear evidence that the laws make voting harder for voters of color — whether Black, Latino or Native American," which should be seen as a violation of the Voting Rights Act of 1965, "which bars any law that discriminates on the basis of race, whether intentionally or not." The decision opens the door to all manner of voter suppression laws that are meant to target minority communities that tend to lean Democratic — especially in Arizona, where Joe Biden's presidential victory has kicked off another round of anti-voting fervor in the GOP-controlled state legislature.

The impact of voter suppression laws on presidential elections has gotten the most attention, but equally important is the way that Republicans are using these laws to gain control of Congress, particularly of the Senate. Sinema only beat her Republican opponent, incumbent Sen. Martha McSally, by a hair — around 56,000 votes in an election where 2.3 million people voted. In 2020, the Democratic candidate for the other Arizona Senate seat, Mark Kelly, beat McSally by about 79,000 votes out of nearly 3.4 million cast. Republicans understand that they don't need to keep the majority of voters of color from the polls to steal elections in that state. Even keeping just a fraction of non-white voters from accessing the ballot will be enough to throw elections to Republicans.

Republicans are openly trying to cheat Sinema out of her own seat, and instead of fighting back, she's openly inviting them to do it. This is hardly some noble self-sacrifice for the greater good. Instead, Sinema is undermining her own political future to defend the filibuster, an archaic practice that only exists because of a historical accident, which has been largely used for the purpose Republicans use it now, to protect and promote white supremacy.

Worse, there's evidence that Sinema used to agree with the majority of Arizona voters that passing bills is more important than preserving the filibuster. In a recently unearthed video from 2010, Sinema can be heard calling the filibuster "false pressure to get to 60" votes to pass bills. This was a much different tune than the one she's been singing lately, such as in her infamous Washington Post op-ed where she claimed that the filibuster encourages "bipartisanship," which is the only way to "achieve durable, lasting results."

(In reality, as the inability to pass voting rights legislation shows, the filibuster is a good way to achieve nothing but a more rapid decline into authoritarianism.)

The change from someone who wanted to pass progressive legislation to someone happy to given control to the Republican minority, even to the detriment of her own political future, has spurred all manner of speculation about Sinema's dark motivations. But unlike Manchin, who really does have strong ties to right wing corporate interests, there's really not a lot of evidence that Sinema is in thrall to pro-filibuster industries like the fossil fuel industry.

The alarming possibility is that she really is just a person who has more ego than sense.

Tim Murphy published an in-depth profile of Sinema for the July/August issue of Mother Jones, and in it, he traces her enthusiasm for the idea of bipartisanship to a political victory early in her career in the Arizona state legislature, when she joined a bipartisan group that successfully defeated a 2006 ballot provision to ban same-sex marriage. Rather than making appeals for LGBT equality, her group's strategy "decided to emphasize the impact the referendum would have on straight couples," due to its provision that stripped legal rights away from all domestic partnerships, gay or straight.

In Murphy's telling, this was the moment that Sinema's entire attitude towards politics changed. She became enamored of the idea that she's some brilliant strategist who can manipulate "bipartisanship" to achieve progressive ends. It really may be that her self-image as a mastermind at playing 11th level chess is what's driving her to think she's smarter than nearly every other Democrat on Capitol Hill. She's likely unwilling to see that the strategy that worked against this single-ballot initiative 15 years ago is not going to work against the obstructionist politics that Senate Minority Leader Mitch McConnell, R- Ky., has embraced to great success for at least as long. Of course, if Sinema thinks she's smarter than McConnell, she's wrong.

Last week, Sinema was repeatedly photographed with President Biden and a bipartisan group of senators to announce a "deal" struck on an infrastructure bill that would supposedly attract enough Republican votes to overcome the filibuster. In the photos, Sinema's grin has an unmistakable air of gloating. No doubt she was thrilled to believe she had proved her critics wrong and demonstrated that she really is the bipartisan negotiation ninja she imagines herself to be.

Within hours, however, Republicans produced the pretext to blow up the bill. They feigned outrage that Biden, as he always said he was going to do, was working to attach Democratic priorities left out of the bipartisan bill to a budget reconciliation bill that only needs a 51-vote majority to pass. Republicans did what everyone who has been actually paying attention to D.C. politics said they were going to do: Waste Democratic time by pretending to negotiate a bipartisan bill, only to find some excuse to blow it up at the last minute. It's the GOP's time-honored "running out the clock" playbook and entirely predictable. But Sinema thinks she's smarter than everyone else, and so she walked right into the Republican trap.

It's cold comfort, knowing that Sinema will likely pay for her outsized ego by losing her re-election campaign. While no one deserves it more than she, the problem is that losing her could very well mean Democrats lose control of the Senate. If the vote suppression also returns the White House to Republican hands, the kind of immoderation that Sinema claims to oppose will only run rampant. McConnell will get right back to an agenda of slashing taxes for the rich and stuffing the courts with right-wing radicals, all without having to worry one bit about being stopped by that filibuster that Sinema rates as more important than democracy itself.

Sinema may be the egotistical dingbat in this situation, but it's the nation that will pay the price for her hubris.