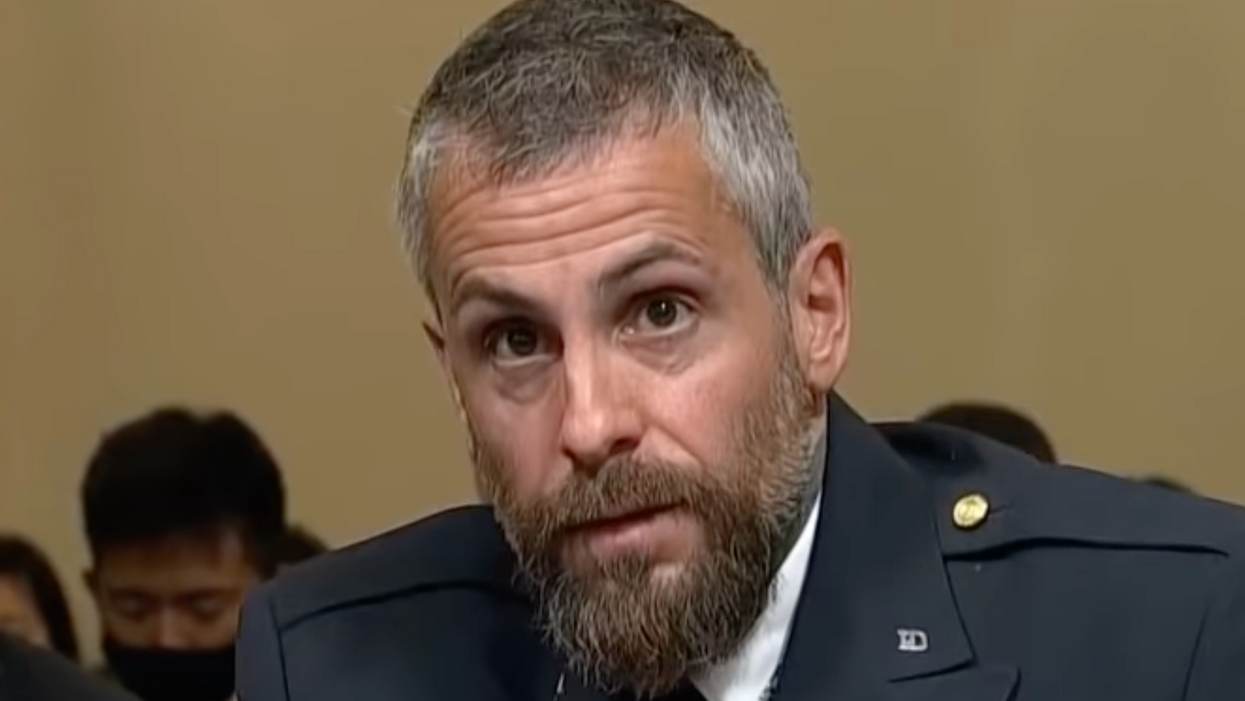 Michael Fanone made news during testimony before the House select committee investigating the January 6 sacking and looting of the United States Capitol. While recounting his experience, which included electrocution "again and again and again with a taser," thus triggering a heart attack, the Metropolitan police officer said, "I feel like I went to hell and back to protect them and the people in this room, but too many are now telling me that hell doesn't exist or that hell actually wasn't that bad."

Fanone then punctuated the last word in the following sentence by pounding his fist on the table: "The indifference shown to my colleagues is disgraceful." (Boom!)

Fanone was talking about the indifference of the Republicans in the United States House of Representatives. If the Post's reporting this morning is any indication, the GOP appears bent on proving the point. Sure, it might be disgraceful to show indifference to the men in uniform who put their lives on the line to protect elected officials, but really, who's got the time to watch a "political charade"? Per the Post:

House Minority Leader Kevin McCarthy (R-Calif.) said he was "booked in all these different meetings." Rep. Jim Jordan (R-Ohio) told reporters he was tied up with a committee hearing. Republican Conference Chair Elise Stefanik (R-N.Y.), who rose to her position after her predecessor was sacked for criticizing Trump's role in the attack, declined to say whether she watched. Rep. Matthew M. Rosendale (R-Mont.) said he did watch—but only the opening statement from Rep. Liz Cheney (R-Wyo.), who has joined the panel in defiance of her party, not the officers' testimony.

Indifference isn't the only thing they're proving. The four police officers told their stories of being assaulted, beaten, maced, or nearly murdered. That, however, wasn't the painful part. These are hardened experienced cops, after all. The painful part, a sentiment expressed by each of them, came later when they realized everything they believed in—duty, sacrifice, loyalty and honor—meant nothing to these Republicans. Over and over, testimony kept returning to a variation on a familiar theme: betrayal.

Again, Officer Fanone: "My law enforcement career prepared me to cope. … Being an officer, you know your life is at risk whenever you walk out the door, even if you don't expect otherwise law-abiding citizens to take up arms against you. But nothing, truly nothing, has prepared me to address those elected members of our government who continue to deny the events of that day, and in doing so betray their oath of office."

Capitol Police Sgt. Aquilino Gonell, who fought in Iraq, said: "While I was at the lower west terrace of the Capitol working with my fellow officers to prevent the breach and restore order, the rioters called me traitor, a disgrace and that I, an Army veteran and a police officer, should be executed. … Now the same people who we helped, the same people who we gave them the borrowed time to get to safety, now they are attacking us. They are attacking our characters. They're attacking Officer Harry's character, people who never served in the military or law enforcement. It's a disgrace."

I emphasize that last bit for a good reason. Betrayal was the first of two big themes. The second, related to the first, was unvarnished contempt for it. Metropolitan Police Officer Daniel Hodges, who also gave testimony Tuesday, was literally pinned between the mob and a door frame for so long that one of the insurgents beat his face repeatedly with his own baton. Hodges then watched video of the moment as evidence entered into the record, surely feeling re-traumatized. And yet people who never served in the military or law enforcement have the gall to attack the character of these men.

Again, Sgt. Gonell: "For me, it's confounding that some people who have sworn an oath, elected officials … they're forgetting about that oath. They're not putting their country before their party. And that's what bothers me the most, because as a former soldier, I know what that inherits, that oath. … You got people right now in front of the justice department, asking to release some of the very same people [i.e., insurgents] to be released, even though we are testifying about the trauma and the agony, everything that happened to us, is pathetic and they shouldn't be elected official anymore" (my stress).

Yes, they have the gall. According to HuffPost's Igor Bobic, United States Senator John Kennedy said he dismissed Tuesday's hearing as "Pelosi's partisan pageantry." "Just because she loves drama doesn't mean I have to watch it," the Republican said. "This is the speaker's attempt to try to link the atrocities of Jan. 6 to the Republican Party."

Actually, it isn't. That's for another time, though. For now, I think what needs saying but has not been said to the extent it should be is that the Republicans have made being an American a partisan issue. They have made being an American so partisan that it's now "pathetic," as Sgt. Gonell said. This seems the inescapable conclusion to be drawn from Tuesday's testimony. These cops are sworn to service irrespective of partisanship. They protect Republicans and Democrats in equal measure. The oath they take is binding in its loyalty to principle and the Constitution, not to party.

The takeaway then is that being an American is so politicized there are now two sides to the controversy. One side is for democracy. One side is against it. One is for the Constitution and the principles it enshrines. One is for the GOP and its fuhrer. One side honors duty and sacrifice. One side belittles them. One side sees selfishness, disloyalty and betrayal as fair game. One side has unvarnished contempt for treason.

"You are great law enforcement officers and heroes to law enforcement officers across the country. … But you are [also] great Americans and you are heroes to all of America," Maryland Congressman Jamie Raskin, a member of the select committee, said. "And long after you are gone, you will be remembered as heroes to our country, along with your fellow officers, and those who attacked you, and those who beat you are fascist traitors to our country and will be remembered forever as fascist traitors" (my stress).

He was talking about the insurgents.

He was talking about the Republicans.