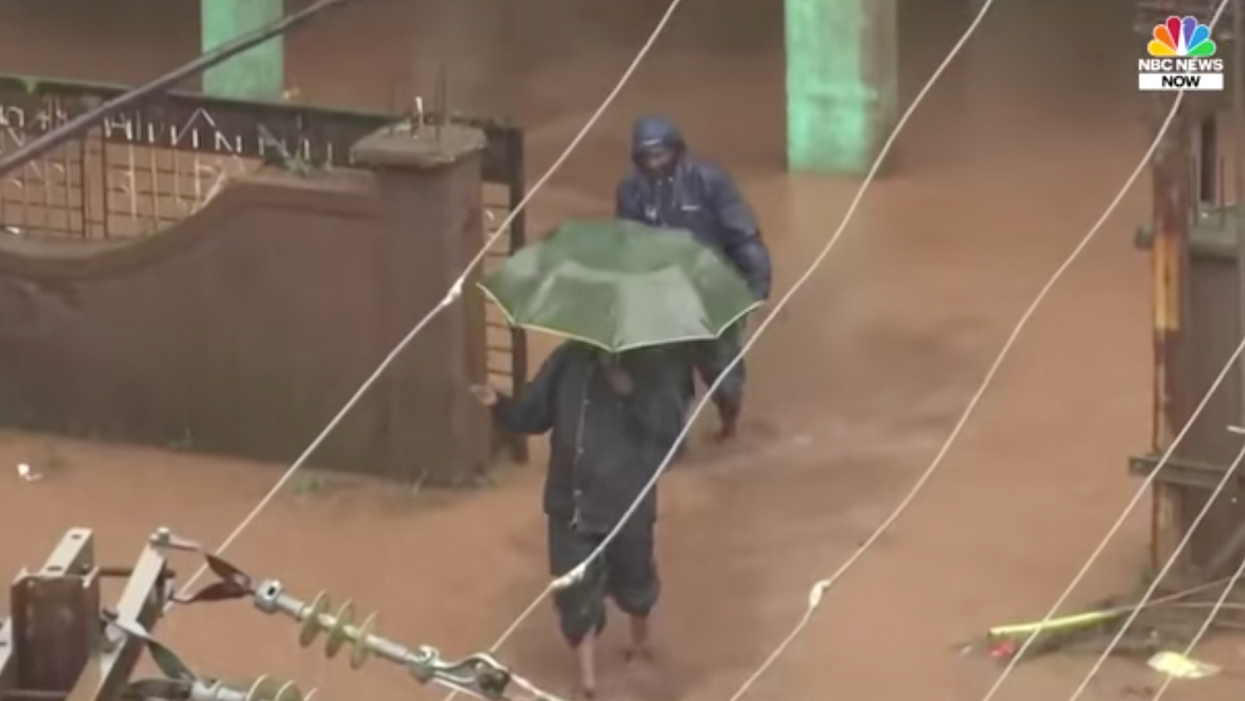 In India, landslides triggered by monsoon rains—which scientists say are increasing in frequency and intensity as a result of the fossil fuel-driven climate crisis—have killed dozens of people this week, including at least 112 overnight in the western state of Maharashtra, authorities said on Friday.

Parts of India's west coast received up to 23 inches of rainfall in a 24-hour period, leaving thousands stranded without electricity or drinking water and prompting officials to evacuate people from vulnerable areas before they discharged excess water from dams at risk of overflowing, Reuters reported.

"Unexpected very heavy rainfall triggered landslides in many places and flooded rivers," said Chief Minister Uddhav Thackeray, the head of Maharashtra's state government. "Dams and rivers are overflowing. We are forced to release water from dams, and, accordingly, we are moving people residing near the river banks to safer places."

Citing government officials, Reuters reported that at least 38 people were killed by a landslide that destroyed the small village of Taliye, about 110 miles southeast of Mumbai, India's financial and entertainment capital and home to more than 12 million. Elsewhere in Maharashtra, an additional 59 people died in nine other landslides, while another 15 were killed in accidents linked to the torrential downpour.

More than 1,000 people who had been trapped by floodwaters in Maharashtra were rescued over night, Al Jazeera reported, but authorities fear that dozens more remain pinned down by multiple landslides, including three that hit the Raigad district on Thursday.

According to an unnamed state government official, "Rescue operations are going on at various places in Satara, Raigad, and Ratnagiri. Due to heavy rainfall and flooded rivers, we are struggling to move rescue machinery quickly."

Al Jazeera noted that "disasters caused by landslides and flooding are common in India during the June-September monsoon season, when heavy rains weaken the foundations of structures that are often poorly built. The monsoon is crucial for rain-fed crops planted during the season, but the rains often cause extensive damage and kill many people each year."

Roxy Mathew Koll, a scientist at the Indian Institute of Tropical Meteorology in the western city of Pune, however, emphasized that "the frequency and intensity of heavy rains has increased" as the warming Arabian Sea generates more cyclones and heavier rainfall over shorter periods of time.

Koll's observation was echoed by D.S. Pai, director of climate research and services at the India Meteorological Department (IMD) in Pune.

"This region always received heavy rains during monsoon," Pai told the Hindustan Times earlier this week. "But in recent decades, the frequency and intensity of extremely heavy rainfall events have increased which can be attributed to climate change. There are long dry spells followed by episodes of heavy to extremely heavy rain."

Bursts of extreme rainfall can overwhelm storm drains and other infrastructure in densely populated urban areas, Pai noted. In addition, "there are low-lying areas which are vulnerable to sea-level rise, and there are ghats or hilly areas which are also vulnerable due to a combination of deforestation, land-use change," and other factors.

This week's devastation began over the weekend, when an intense rainstorm—described by meteorologists as "monstrous"—pummeled Mumbai and its outskirts, causing landslides that killed more than 30 people. Massive levels of precipitation persisted throughout the week.

The Guardian reported earlier this week that "the thunderstorm that caused the intense rainfall was described as 'uncommon' for this time of year."

O.P. Sreejith, another climate scientist at IMD, told the Hindustan Times that "extreme rainfall events are on the rise across the globe not just over [India's] west coast."

"We saw it happening in Germany last week," Sreejith continued. "Our modeling systems are not able to forecast such extreme rainfall happening over a short period of time, in advance. Only nowcasting is possible. So preparedness time is reduced, increasing risk for people."

Anja Katzenberger of the Potsdam Institute for Climate Impact Research and Ludwig-Maximilian University in Munich, Germany—the lead author of a study published in April—said earlier this year that "global warming is increasing monsoon rainfall in India even more than previously thought. It is dominating monsoon dynamics in the 21st century."

Katzenberger warned that "for every degree Celsius of warming, monsoon rainfalls will likely increase by about 5%."

According to Maharashtra's environment minister, Aadtiya Thackeray, "We have been talking about climate change and it is happening."