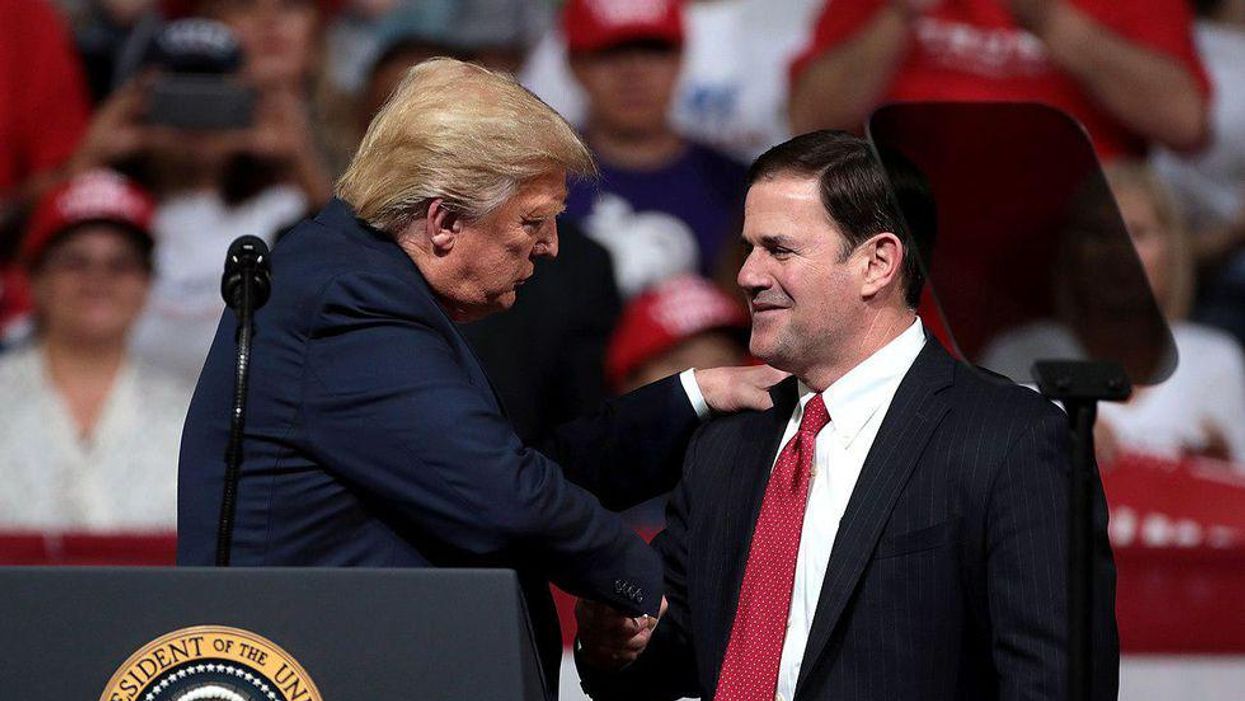 The first thing to know about the fake Arizona vote "audit" that was the subject of an equally fake state senate "hearing" last Thursday: It's nearly impossible to follow what the hell is happening.

A lot of wild claims about voting "irregularities" are being flung about, and so are the fact checks, in a dizzying array of information that will cause even the most avid QAnoner's eyes to glaze over. Over the weekend, Donald Trump put out three separate statements full of so many false claims about the "audit," that it's nearly impossible to keep track of and debunk every lie. Associated Press reporters must surely be commended for their efforts in doing so.

The second thing to know about the fake audit is that everything about it is pure theater. It is agitprop meant to create the illusion of information-gathering while the people involved are doing everything in their power to distort reality.

Take for instance Doug Logan, a conspiracy theorist masquerading as a security "expert," whose firm, Cyber Ninjas, is running the fake audit. He pretended to testify last week about the so-called audit in an environment done up to look like a senate hearing. In reality, as the Arizona Republic reported, "it was not a hearing of any committee," and no one was allowed to ask questions but Arizona Senate President Karen Fann and Sen. Warren Peterson, two Republicans who have been involved in propping up this fake audit from day one.

The third thing to know is that, even though the "audit" was supposed to be wrapped two months ago, it's quite clear now that it will be dragged out for a long time, and may never really be concluded.

Logan has a pre-existing conclusion — that the election was "stolen" from Trump — and so Logan wants to keep digging even though he is yet have turned up any real evidence, because it didn't happen. He is now asking if his "auditors" can go door to door, using "canvassing" as cover for what is obviously going to be a racialized harassment campaign against Arizona voters.

This Arizona fake audit is incoherent, fact-free, and apparently endless, which has led to some amount of liberal gloating about what a disaster the whole thing has turned out to be. Indeed, some Republicans in the state are starting to get a little anxious about the whole thing, worried that it's such a clown show that it will backfire on them. The fake audit and the false claims that the election was "stolen" from Trump are dominating the GOP primary for a Senate nominee to challenge incumbent Democrat Sen. Mark Kelly. One Republican operative even complained to CNN that the "audit is an albatross around the neck for every Republican running in the state of Arizona."

But the sad truth of the matter is that every aspect of the fake audit that is so frustrating — the confusion, the B.S., and its interminable nature — is very much by design. While Trump and his more sane allies likely understand that there is no pathway to getting Joe Biden removed from office and Trump installed any time in the next three and a half years, their eyes are on the 2024 election. Trump likely can't win that one honestly, either, but he doesn't really intend to. Instead, this fake audit is all about laying the foundation for what Trump hopes will be a more successful coup effort than his failed one in 2020.

Trump apologist and disgraced lawyer Alan Dershowitz gave the game away on Fox News Thursday night, admitting that it's "fact that Joe Biden is the president of the United States," but insisting "we have to move forward to make sure that future elections have transparency."

"Transparency" is, of course, Trumpist code for sowing doubt and confusion about the election results, creating a pretext for Republican election officials and judges to simply vacate any election results they dislike. And that is what the Arizona fake audit is all about, generating an endless stream of confusing B.S. that can be leveraged for future claims that the elections are too "corrupt" to actually be counted. As Charles Pierce at Esquire notes, this fake audit is "a political perpetual-motion machine that is designed never to finish its purported 'job.'"

All part of the scheme: Logan's future plans to sue the state repeatedly with false accusations and the hopes for a door-to-door voter "canvassing." It's all about generating more press releases, more confusion, and, if they actually get to start harassing individual voters, more racist scare tactics implying that U.S. citizens are "illegal" voters.

Information overload is part of the strategy. Logan, Trump, and other fake audit proponents are pouring out lies and false allegations of irregularities so fast that fact-checkers can barely keep up. It's very much a variation of the GOP's "Benghazi" playbook: Flood the zone with so much confusing information that most people don't bother trying to understand it. Instead, many will assume that where there's so much smoke, there must be a fire.

Will it work? It's hard to say this early on.

Trump spraying a shotgun's worth of false claims about the Arizona election certainly is bolstering his supporters and appears, so far, to be making his allies even more confident lying about the results of the 2020 election. But the larger question is whether it's enough for the longer-term goal of setting up Republican-controlled state legislatures or even a Republican-controlled Congress in 2024 to simply throw out a Democratic win in 2024. Or to get the Supreme Court to do it for them.

Trump's election lawyer, Jenna Ellis, certainly hinted in that direction on Newsmax Thursday night, saying that the nonsense that Logan was spewing — which was immediately debunked live, on Twitter, by the Maricopa County Board of Supervisors — was enough to justify her claim that Congress should not have certified Biden's win on January 6. Of course, Congress was then controlled by Democrats, so these lies were never going to matter. But Republicans may very well control Congress in 2024. By then, there will four years of lies being generated by this false audit. Worse, there may be false audits in other states, if Republicans get their way. The crush of lies that get repeated over and over until they are GOP canon could very well give Republican-controlled states and a Republican-controlled Congress the pretext they need to evacuate the results of an election that didn't go their way.

The good news is some Democrats in Congress seem to finally be taking this threat seriously. As Zachary Petrizzo in Salon reports, "the House Oversight and Reform Committee have launched a probe into the Arizona 'audit firm 'Cyber Ninjas.'" They explained in a letter requesting documents that they are worried this whole fake audit "could undermine the integrity of federal elections and interfere with Americans' constitutional right to cast their ballot freely and to have their votes counted without partisan interference."

Of course, undermining the integrity of federal elections is the entire point of the "audit." It's not clear how much House Democrats can do, and there's always a risk that adding more fact checks to Trump's lies just increases the amount of chaos Trump is trying to cause. But it's certainly better than standing by and letting this farce just go on without an answer. Unless there's a way to shut the whole thing down, the fake "audit" will likely be dragged out for months or even years, generating more lies and confusion that Trump is counting on to fuel a transparent bid to steal the 2024 election. Ignoring the situation is no longer feasible for Democrats on a national level. The Arizona "audit" may look like a big joke, but it's a very serious threat to democracy.