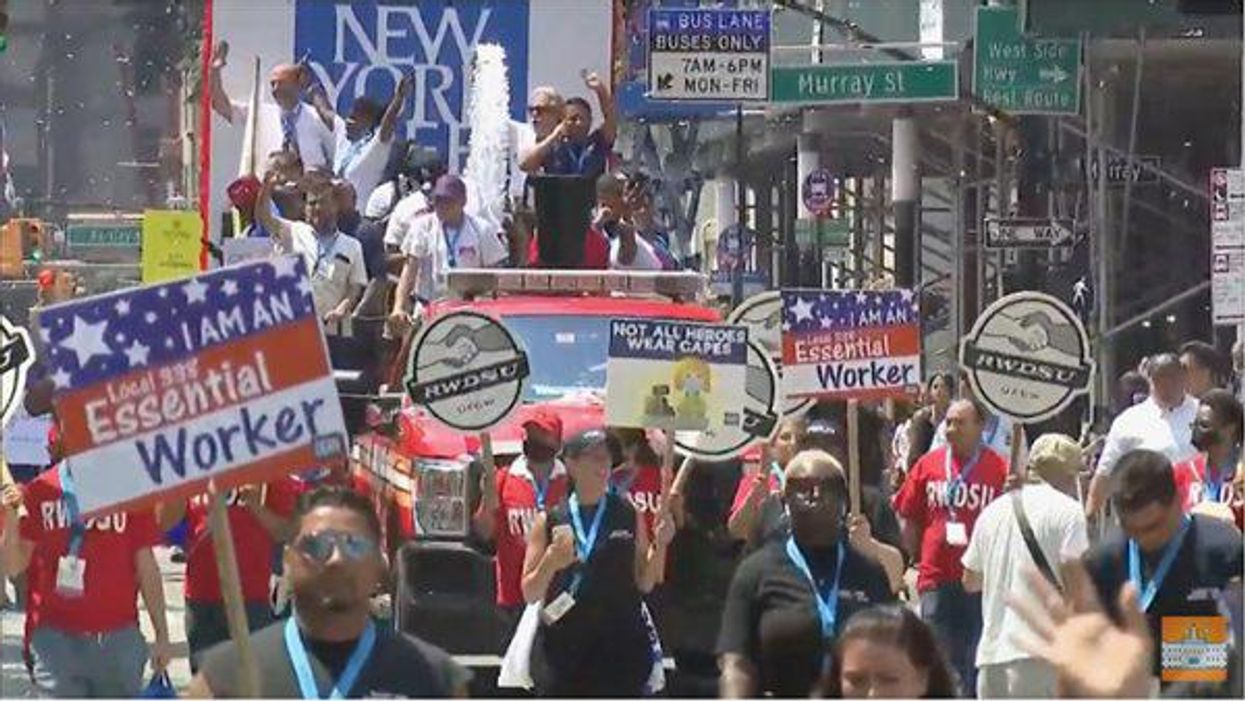 New York City threw essential workers a ticker tape parade along the canyon of heroes last week. And somehow, Gotham's gilded oligarchs were spared the unsavory sight of marchers in matching "I Saved Your Asses From COVID-19 And All I Got Was This Lousy T-Shirt" gear.

Exhausted healthcare workers along with their counterparts in children's services, transportation, retail and other frontline sectors appeared too giddy about surviving the one-time epicenter of Covid and putting the worst of the ongoing pandemic behind them to pass up a well-deserved shot at the biggest block party NYC has to offer. Marching together, workers knew they deserved all the accolades the tired town could muster.

Yet even this most forgiving atmosphere where heaps of blue and orange confetti were periodically blasted from the backs of municipal pickup trucks couldn't obscure the level of worker resentment and anger roiling just beneath the highly produced pomp and pageantry.

As much as he would've liked, hapless outgoing Mayor Bill de Blasio still couldn't get everybody on a float.

The American Federation of State, County and Municipal Employees' District Council 37 [DC 37, AFSME] — the largest public employees union in New York City with some 150,000 members — told Hizzoner just what they thought of his self-serving party by simply not showing up.

Other unions joining DC 37 in its parade boycott, including those representing the Fire Department's Bureau of Emergency Medical Services [EMS] as well as the United Probation Officers Association [UPOA], also had no stomach for the naked hypocrisy of patting bone-weary workers on the back while at the same time continuing to deny them fundamentals including pay parity, early retirement and a fair contract.

"If the mayor wants to celebrate the frontline city workers who put their health and safety on the line to keep New York running at the height of the pandemic, he can start by ensuring every city worker has a fair contract that pays a living wage," the UPOA said in a statement.

Just a week before the "Hometown Heroes" parade, some 200 retired city workers took to the streets of lower Manhattan to protest a secretive backroom deal swapping out their Medicare healthcare plans with private Medicare Advantage ones costing them thousands of dollars a year.

"I worked 34 years," retired special education teacher and United Federation of Teachers [UFT] member Gloria Brandman said at the scene. "I was promised Medicare and supplements paid for by the city."

Nationwide, frontline workers who risked all throughout the pandemic are still waiting for fundamental job protections, vital healthcare coverage, a $15 an hour minimum wage, the right to organize and enforceable workplace safety standards to protect them against the further spread of Covid and its emerging variants.

What they are getting instead is an economic ass-whooping consisting of stagnant wages, vanishing unemployment benefits and rising consumer prices.

The sweet confections baked into ticker tape parades and the like are meant to distract from all that pain and suffering while the country's elite continue to gorge themselves on the $1.6 trillion they've amassed during the pandemic.

In Detroit, for instance, the city's essential workers are being feted to "Thank You Tuesdays" at Comerica [Bank] Park, where home game festivities include special scoreboard shoutouts and base pads reading, "Thank You Frontline Heroes."

Liz Hanbidge, a state representative from Harrisburg, Pa., went even further this past spring, introducing a resolution in her state's General Assembly designating 2020 as "Frontline Workers Appreciation Year."

At least Hanbindge backed up the empty accolades with a proposal requiring large businesses to extend hazard pay to essential workers, along with a few other limited pro-worker measures including one offering supplemental payments to frontline workers still earning less than $15 an hour.

But elected officials aren't exactly shutting down traffic or breaking out the yellow vests in order to get working men and women in this country what they need for themselves and their families.

Back in New York, where embattled Gov. Andrew Cuomo is doing his best to create his own blue collar bone fides with a problematic new monument at Manhattan's Battery Park dedicated to essential workers, it's much the same thing.

Ahead of the July 7, "Hometown Heroes" parade, City Council Member Margaret Chin expressed her "hope" that "many eyes" have been opened during the pandemic about the "value of these [essential] jobs."

"As the city reopens we must continue to respect and advocate for these workers," the lawmaker, who represents many parts of lower Manhattan including Battery Park City, declared.

Hopes and prayers are nothing in the face of an oligarchic onslaught machine that exists to keep exploited farmworkers hidden and out of sight; hard-pressed Amazon employees too exhausted and afraid to raise their heads; and pretty much everyone else in the good 'ol USA in a permanent somnambulistic stupor.

Jeff Bezos, Mark Zuckerberg, Elon Musk and other vaunted captains of industry are among the few who always have their eyes wide open.

When the monied interests oppose unionization, livable wages and universal healthcare — they know it's not about the Benjamins. These economic royalists know it's all about preserving their lofty perches by continuing to deprive working men and women of economic autonomy, strength and power.

Of course, Bezos and the rest of the oligarchic elite have more than enough money to pay workers better wages and benefits [for crying out loud, they're shooting themselves into outer space]. What they absolutely can't afford, however, is to lift their boots off our necks. Not even a little bit.

Public exhibitions and monuments like the ones popping up during the vaccination rollout have always been very powerful tools — whether created to instill particular narratives in the minds of the masses favorable to the ruling elite or making the masses believe the ruling elite actually cares about the concerns of workers.

That statue of Robert E. Lee that recently came down in Charlottesville, Va., was erected a-hundred-some-odd-years-ago with a clear-eyed purpose. In this case, to obscure the ugly fact that the Civil War was fought to perpetuate slavery and not at all about protecting "states rights," "honoring southern heritage," or any other such nonsense.

And despite the genuine earnestness of the participants, Mayor Muriel Bowser's decision to allow "BLACK LIVES MATTER" to be painted on 16th Street in Washington, DC also sought to accomplish the ruling elite's aim of placating the masses without, you know, actually doing anything to stop fascist police from murdering unarmed Black and Brown people.

Either way, it seems like you still can't go wrong with a statue or parade if you want to try and keep the working class in check.