Don Jr. fumes for 13 minutes after the Trump Organization is indicted: 'This is what Russia does' 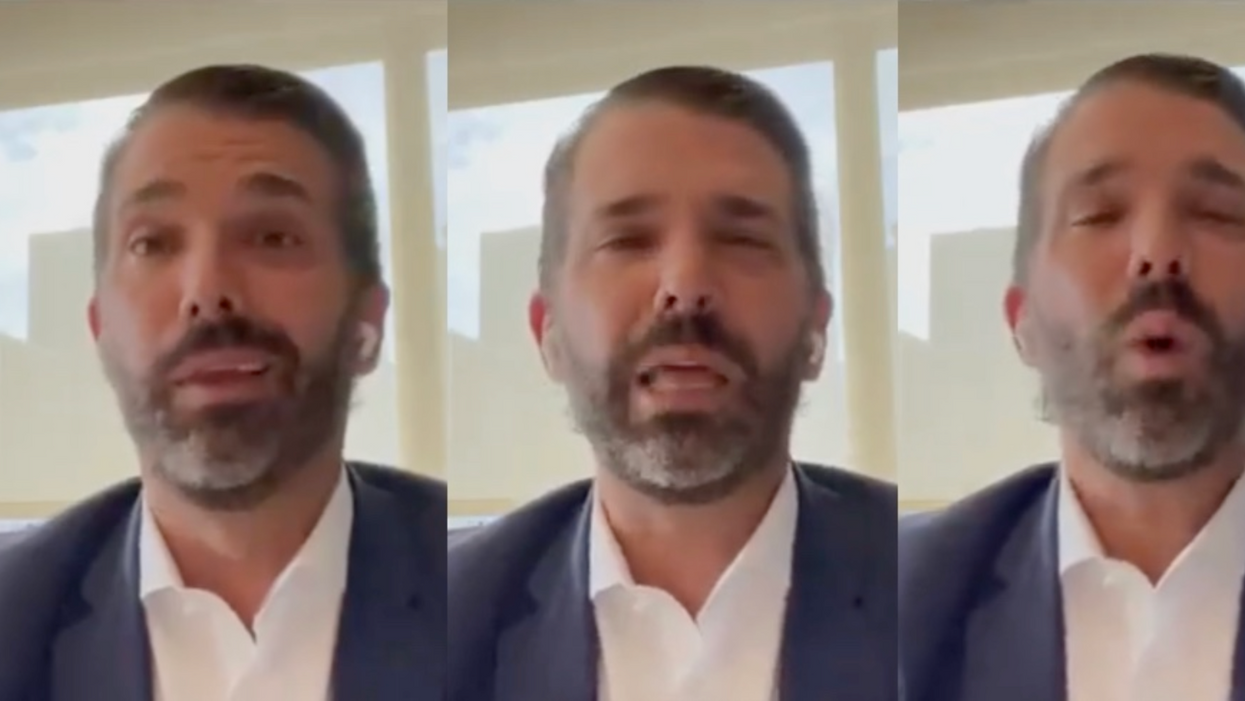 Donald Trump Jr. for 13 minutes rambled and whined on a Facebook video Thursday about the 15-count federal criminal felony indictment handed up by a grand jury against The Trump Organization and its CFO Allen Weisselberg. The former president's son falsely compared it to how Russian President Vladimir Putin punishes his political enemies, along with Iran and China, while falsely characterizing the depth and breath of the criminal indictment.

(Some experts say the indictment could mean the end of The Trump Organization.)

Trump Jr. praised Weisselberg as The Trump Organization's loyal "accountant," yet laid the blame on him, while barely acknowledging the indictments also name the family company, except when he called it a "witch hunt" and an extension of the Mueller investigation. He also ignored that Weisselberg has been the Chief Financial Officer of the family business for more than two decades.

(Weisselberg began by working for Fred Trump, Donald Trump's father, in 1973 as an accountant. He became the company's controller in the 1980's, and ultimately CFO who co-ran The Trump Organization while Donald Trump was president.)

Trying to minimize the charges, which include a 15-year tax scheme "including a scheme to defraud, conspiracy, grand larceny and falsifying business records," CNN reports.

Instead he claimed it essentially was about Weisselberg not paying taxes on a company car, and about the Donald Trump paying tuition for one of Weisselberg's "grandkids," because "he's a good guy."

"My dad did that cuz he's a good guy, takes care of his employees. And, it was the nice thing to do."

"This is what they got," he added, "they're able to tie in the Trump organization because he's the CFO right" So they try to do that for the flowery headlines because this is what they've been promising you, right?"

"How is this, anything but a political persecution? How is this anything other than a government abuse of power. Let's break it down for you," Trump Jr. continued, weaving a web of falsehoods. "They've been doing this for about five years, hundreds of witnesses presumably countless hours of grand jury testimony 3 million documents reviewed by the AG and the DA, right? 3 million documents, what they've got someone on his, he didn't pay taxes on fringe benefits."

At one point Jr. claimed the amount of unpaid taxes was a mere $5000 per year, which is false.

"Yeah, that's all it is, man. It's a game, and it sucks, because this isn't what America is about. This is what Russia does. This is what Iran does. This is what China does, but it's happening right here right now. And so many people are totally silent about it, which also sucks, but we're gonna keep fighting, because we have to, because it's worth fighting for," Trump Jr. promised. "And we can't let this crap take over America, or we won't have an America that any of us recognize for our kids. You guys have a good one."

It appeared that many of the more than 1000 comments on the post were supportive of Trump and the former president, and the social media users "bought" the lies Trump was telling.