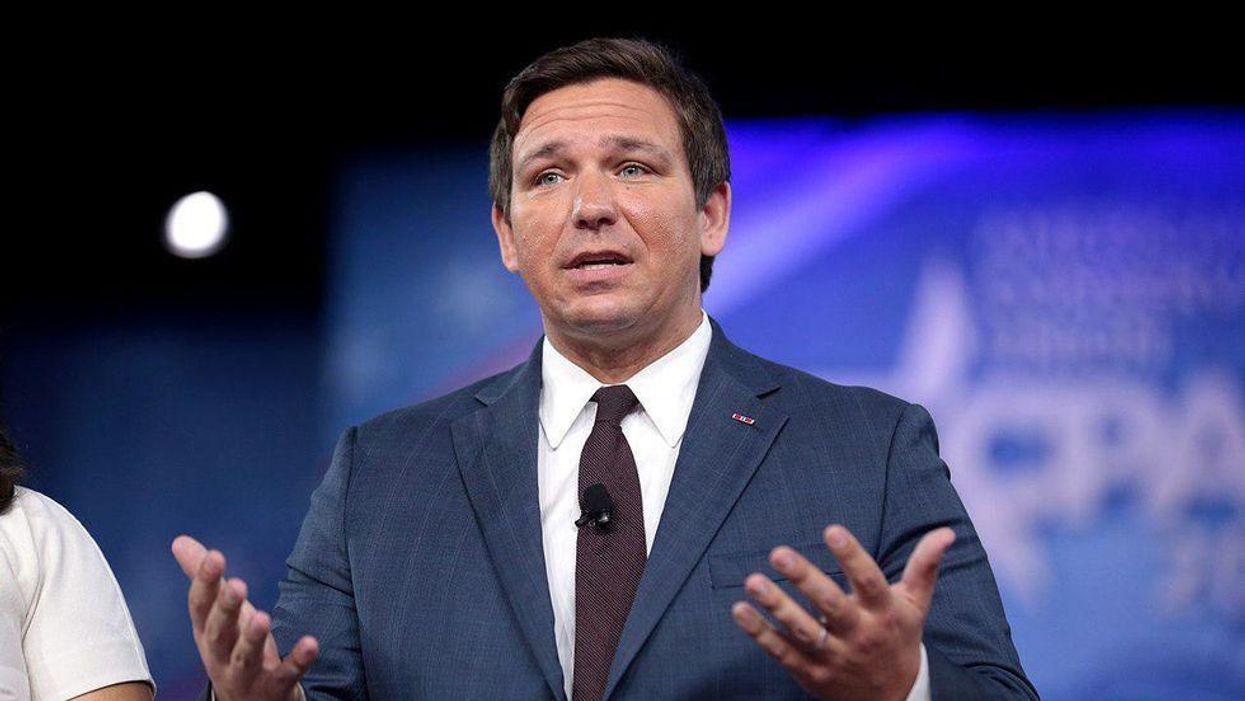 The state of Florida now accounts for one in five new coronavirus infections in the United States, making it the nation's most alarming hot spot as the highly transmissible Delta strain rips through undervaccinated communities and drives a surge in hospitalizations.

According to new data from the Centers for Disease Control and Prevention, Florida has recorded 73,181 new Covid-19 cases over the past week, the most in the country. Florida also logged the most coronavirus deaths of any U.S. state in the last seven days—319—and hospitalizations are spiking, prompting dire warnings from physicians and calls for public safety measures to stop the spread.

But Florida Gov. Ron DeSantis, a Republican and likely 2024 presidential candidate, has recently taken to mocking such measures; earlier this month, the governor's team launched a new merchandise line that includes a koozie with the quote, "How the hell am I going to be able to drink a beer with a mask on?"

Other items take aim at Dr. Anthony Fauci, director of the U.S. National Institute of Allergy and Infectious Diseases and a frequent target of right-wing ire. "Don't Fauci My Florida," declares a shirt selling for $21 on a DeSantis campaign website.

While DeSantis has publicly stressed the importance of vaccination in recent days, Florida physicians have attributed the surge in infections, hospitalizations, and deaths in the state to the governor's rush to end public health restrictions.

"While hospitals in our state were filling up, DeSantis was shouting about 'Freedom over Faucism,'" said Bernard Ashby, a Miami-based cardiologist and head of the of the Florida chapter of the Committee to Protect Health Care. "If DeSantis were as concerned about stopping Covid-19 spread as he was about coming up with these clever jabs about Dr. Fauci, we might not be in this position."

As the Wall Street Journal reported Sunday, epidemiologists argue that "various factors" are behind the Florida crisis, including: "large numbers of unvaccinated people, a relaxation of preventive measures like mask-wearing and social distancing, the spread of the highly contagious Delta variant of the coronavirus, and the congregation of people indoors during hot summer months."

Chad Neilsen, director of accreditation and infection prevention at the University of Florida Health Jacksonville, told the Journal that hospitalizations are surging at a rate "we have not seen before ever." Data collected by Florida epidemiologists shows that recent hospital patients have been skewing younger, with more than half under the age of 60.

"It really has been unbelievable," said Neilsen.

In a scathing editorial last week, the Orlando Sentinel accused DeSantis of prioritizing his presidential aspirations over Florida's pandemic response.

"Florida was all over the news this past weekend with one of the nation's biggest spikes in Covid cases and hospitalizations," the editorial reads. "And where was Gov. Ron DeSantis as this health crisis resurged? Visiting hospitals? Consulting with physicians and public health experts? Huddling with his staff to brainstorm ways of persuading more Floridians to take the vaccine that would nip this pandemic in the bud?"

"Nope. Florida's governor was in Texas, 1,000 miles from Tallahassee, burnishing his 2024 presidential ambitions with a visit to the southern border," the article continues. "The governor was back in Florida on Sunday but, once again, not to focus on the Covid health crisis but this time to make fun of Anthony Fauci in a speech before a crowd of young conservatives in Tampa... And every few days, nearly as many people are dying from Covid as died in the recent collapse of a condominium in South Florida."

Florida's coronavirus surge comes in the context of a nationwide jump in infections that has federal officials worried about another devastating wave as vaccination rates slow and governments relax—and, in the case of Florida and other Republican-led states, aim to actively prohibit—public health requirements such as mask-wearing indoors.

The New York Times reported over the weekend that "hospitalizations have increased in 45 states, Washington D.C., and Puerto Rico over the past two weeks."

"The only states where they have gone down are Maryland, North Dakota, Pennsylvania, Rhode Island, and Vermont," the Times noted. "Florida, Missouri, and Texas account for about 34% of all new cases nationwide. Greene County in southwestern Missouri reported 259 Covid-19 hospitalizations on Tuesday, up from a previous high of 237 on December 1. By Wednesday, that number was 265."

In an appearance on CNN Sunday morning, Fauci warned that the U.S. is "going in the wrong direction."

"This is an issue predominantly among the unvaccinated," said Fauci, "which is the reason why we're out there practically pleading with the unvaccinated people to go out and get vaccinated."