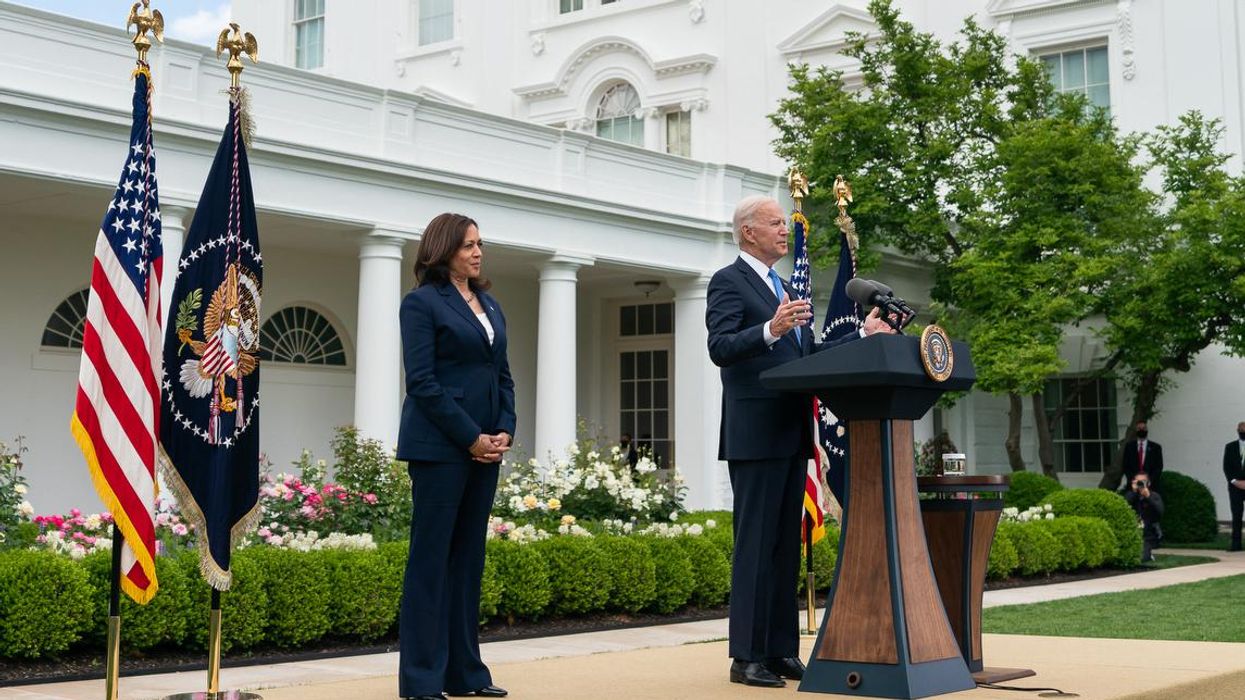 President Joe Biden, joined by Vice President Kamala Harris, delivers remarks on the CDC's updated guidance on mask wearing for vaccinated individuals Thursday, May 13, 2021, in the Rose Garden of the White House.

Republican officials in Texas are celebrating a major political win after successfully suing the federal government over the Deferred Action for Childhood Arrivals (DACA) program. DACA has been a GOP target since 2012 when then-President Barack Obama first created it and then in 2014 expanded it via executive action. It has faced numerous Republican-led legal challenges and subsequent court rulings as well as an outright suspension of the program during Donald Trump's administration. In spite of a 2020 Supreme Court ruling that upheld it, a new Texas federal court ruling by a known anti-immigrant judge named Andrew Hanen deemed the program "illegal," leaving the lives of hundreds of thousands of young immigrants in limbo once more.

One such immigrant is Fatima Flores, the political director of the Coalition for Humane Immigrant Rights of Los Angeles (CHIRLA), who just a week and a half before the ruling had renewed her DACA status. Had Hanen's ruling come before her renewal, Flores would likely have been among those immigrants at risk of losing her status given that no new applications are being processed.

Flores told me in an interview that she sees the devastating ruling as "an attack on our immigrant communities," and points out that there is a "backlog of thousands of DACA recipient hopefuls [who] will not have a decision on their case." This means they are in jeopardy of losing employment and benefits, which in turn could result in evictions. The ruling also means that those immigrants who might have been able to adjust their status under DACA are now eligible for possible deportation. Flores explained, "I came to this country when I was six, and I am 30 now. And I am one of millions of people who have been waiting for something to happen [toward legalization]."

The ruling is even more disappointing considering the role that DACA holders have played as essential workers and health care workers during the pandemic, delivering lifesaving care to U.S. residents. After the U.S. Supreme Court last year ruled against Trump's suspension of the program—saying that the Trump administration did not provide adequate justification for ending it—an estimated 30,000 health care workers with DACA status were protected from deportation and allowed to continue their critical work. The American Medical Association's general counsel went as far as citing that the central tenet of health care is "do no harm," and that, "if we strip this population of caregivers out of the system, that's pretty significant harm." Hanen's ruling threatens to do just such harm at a time when the United States appears to be on the cusp of another surge of COVID-19 infections.

Although President Joe Biden has already announced that his Justice Department will appeal Hanen's ruling, Flores worries such a legal challenge will simply take too long, leaving countless numbers of potential DACA applicants stranded, unable to gain employment and subject to deportation even though the United States is the only country most have known. Worse, if the appeal goes all the way to the U.S. Supreme Court, this time the conservative majority on the court could end the program altogether.

She suggested that a more direct pathway to cementing DACA was via the legislative process so that it is no longer beholden to the whims of Republican attorneys general, state governors or presidents. While legislative pathways on immigration have been frustratingly elusive in recent years, and while Democrats have passed far too few bills while holding power in 2021, this time on this issue, success may be within reach. That is because a limited form of immigration reform could pass through the Senate budget reconciliation process, requiring only a simple majority instead of a filibuster-proof supermajority.

Padilla is pushing for legalization pathways to be included in negotiations over an infrastructure package and is confident that Biden backs him, saying, "I believe the White House is supportive of both an ambitious infrastructure package, and as substantive immigration reform as you can achieve in any way possible." Perhaps more importantly, West Virginia Senator Joe Manchin, one of the most intractable Democrats on progressive legislation, has signaled that he too supports passing immigration reform in this manner.

Worryingly, it is the Senate parliamentarian Elizabeth MacDonough who decides if legalizing DACA through budget reconciliation is acceptable or not, and immigrant advocates slammed Biden's announcement that he would defer to whatever the unelected official decides on the matter. One can only hope that MacDonough's past as a Justice Department trial attorney dealing with immigration cases makes her sympathetic to the plight of DACA holders. Her decision earlier this year to deny the inclusion of a federal minimum wage increase as part of the budget reconciliation was met with national outrage. That said, those financial priorities that can be included in reconciliation are indeed narrowly limited.

The pursuit of immigration reform through a technicality based on the federal budget is perhaps fitting for a nation whose dominant culture, set by elites, perceives human beings as resources and capital, rather than seeing them through the lens of compassion and empathy. But people like Flores and others in her community have had their lives turned upside down for decades awaiting a political solution. If Democrats see immigrants as financial assets, Republicans see them as future Democratic voters who can jeopardize their ill-gotten hold on political power. Flores said, "we're here to stand in solidarity with our communities [fighting for legalization] and be relentless because the Republicans and the GOP are relentless against us."

There is a clear economic case to be made for legalizing undocumented immigrants, even outside the traditional bounds of seeing them as a source of cheap labor for the agricultural and apparel industry. A study released in mid-June by the Center for American Progress examined numerous scenarios for immigrant legalization. If all undocumented immigrants were offered citizenship, the authors concluded that it "would boost U.S. gross domestic product (GDP) by a cumulative total of $1.7 trillion over 10 years and create 438,800 new jobs." If only DACA recipients were legalized, it "would increase U.S. GDP by a cumulative total of $799 billion over 10 years and create 285,400 new jobs." Interestingly, the authors extrapolate that in the former scenario, "all other American workers would see their annual wages increase by $700," and in the latter, "annual wages [would] increase by $400" across the board.

In other words, legalizing immigrants will benefit all American workers over time. Such a conclusion is not based on a complicated economic analysis. Undocumented workers are far more vulnerable to employer exploitation simply because of their lack of legal status. Their status drives down all wages. The converse is also true.

Flores pointed out that the clock is ticking. "We can't leave 2021 without some legalization efforts," because the 2022 midterm elections are around the corner and those senators up for reelection are likely to be preoccupied by their campaigns next year. Additionally, DACA holders and prospective applicants like her are tired. "For the longest time we've been told 'stay in your lane.' We're done waiting," she said. "We're done having to take a back seat. We're done playing nice."