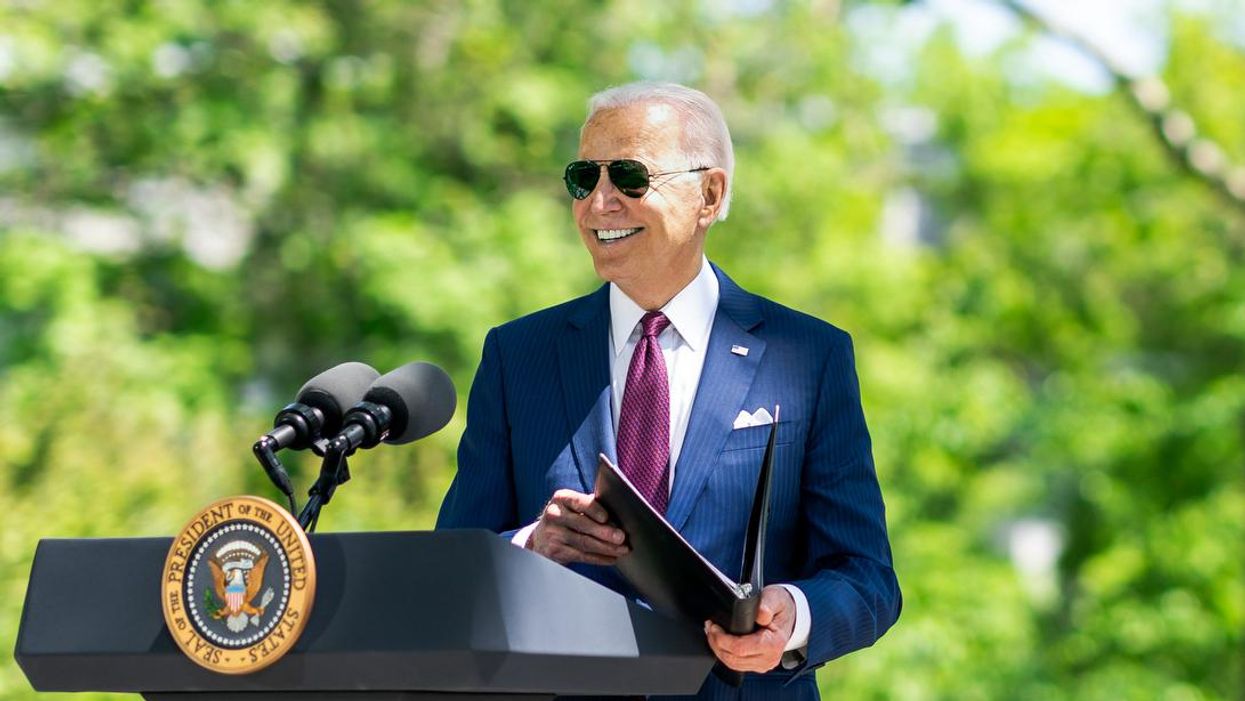 President Joe Biden makes remarks to the press regarding COVID-19 on Tuesday, April 27, 2021, on the North Grounds of the White House.

My mind keeps drifting back to a point Brandon Bradford made about the difference between fictional politics and real politics (my words, not his). In the run-up to the midterm elections, the Editorial Board's very own urbanist said, the Republicans have incentive to scare the hell out of the white working class. "Construction workers see a Democrat on TV, or in a shock-jock headline from the far-right, or on Facebook as 'The Face of Cancel Culture,' they may think MARXIST!" But if the president and the Democrats deliver on an infrastructure agenda, fictions will melt into the air, he said.

[The white working class] will also think: "I may not agree with them, but this person is fighting to get me work." One of those is real. It's hard to combat what gives you stability and hope. Provide a road to the future and the unions tend to follow it.

I was thinking of Brandon's point after word came of a deal between the Senate Democrats and the White House over a $3.5 trillion reconciliation bill that won't get but won't need any Republican support. The Democrats expect it to be "combined with $579 billion in new spending in a bipartisan infrastructure bill that is still being drafted," according to Roll Call. It "will bring the total new spending on infrastructure, climate, child care, education and paid leave programs to $4.1 trillion." That's not the six and a half trillion that was being floated earlier this month, but it's "very, very close to what President Biden asked us for," said Senate Majority Leader Chuck Schumer. "Every major program that President Biden has asked us for is funded in a robust way."

This, I think, is what Brandon was talking about. It's "a road to the future" that the white working class, which continues to dominate the unions, will almost certainly follow given that it provides "stability and hope" that even racially privileged white Americans have been lacking. They might see the Democrats as candy-ass wokesters, but they probably won't care as long as the paychecks are cut on time. Labor and trade unions, as I have argued before, are as vulnerable to fascist politics as any other group in this country. The difference, however, is the fascists among them can be bought off. Democracy doesn't need them to be woke. It just needs them to stay out of the way.

The impact of real politics, as opposed to fictional politics, will be felt beyond the white working class. The suburbs are a regular topic of debate. The fear among some Democrats is that all this wokeness signals division in the party while the Republicans are all-in for Trump. Stephanie Rawlings-Blake is the former mayor of Baltimore. She gave voice to this fear Tuesday on CNN. "It's clear to me Republicans are ride-or-die for Trump," she said. "We have Democrats who are willing to cancel someone if they screw up someone's pronoun. We have to figure out what we're going to do with the next election. … Republicans are all-in for Trump. … Even though we have a big tent, we allow certain issues to divide us in ways we cannot afford to do in these upcoming midterm elections." Such "social issues" risk alienating white suburban voters.

I worry about respectable white people as much as everyone else, but I don't see that great globular middle of American politics moving out of the Democratic lane just yet. I don't see it moving despite an enormous effort by the Republicans to make social justice advocacy (think Black Lives Matter and "critical race theory") seem as hostile and dangerous to democracy, liberty and the common good as the fascism they have embraced. Stephanie Rawlings-Blake is as sensitive to effects of white supremacy as House Democratic Whip Jim Clyburn was when he endorsed from the get-go Joe Biden's presidential candidacy over Kamala Harris's. But unlike the past, when the Republicans offered up a face as safe and folksy as George W. Bush's, they keep standing behind the face of an armed-and-dangerous white-wing insurgency.

If respectable white people respond to anything, it's fear, and if anyone is scary these days, it's the disgraced former president. Though most people most of the time have something better to do than pay attention to politics, most people also understand there's a clean bright line connecting Trump's defeat, the January 6 insurrection and the wholesale effort by state Republicans to codify Trump's Big Lie into state law. And they now see Biden naming the enemy. "We have to forge a coalition of Americans of every background and political party, the advocates, the students, the faith leaders, the labor leaders, the business executives to raise the urgency of this moment," he said Tuesday. "Because as much as people know they're screwing around with the election process, I don't think that most people think this is about who gets to count what vote counts. … We're going to face another test in 2022, a new wave of unprecedented voter suppression and raw and sustained election subversion. We have to prepare now."

To respectable white people, all this talk about "cancel culture" and "critical race theory" is almost totally fictional. What's real is a former president threatening to overthrow the republic with the full faith and credit of the Republican party. What's real is a president calling out a former president in all but name as the enemy. "I swore an oath to you, to God, to preserve, protect and defend the Constitution," he said. "That's an oath that forms a sacred trust to defend America against all threats, both foreign and domestic." As Brandon suggested, it's hard to combat "stability and hope." The Democrats are providing a road to the future. The nation will probably follow it.