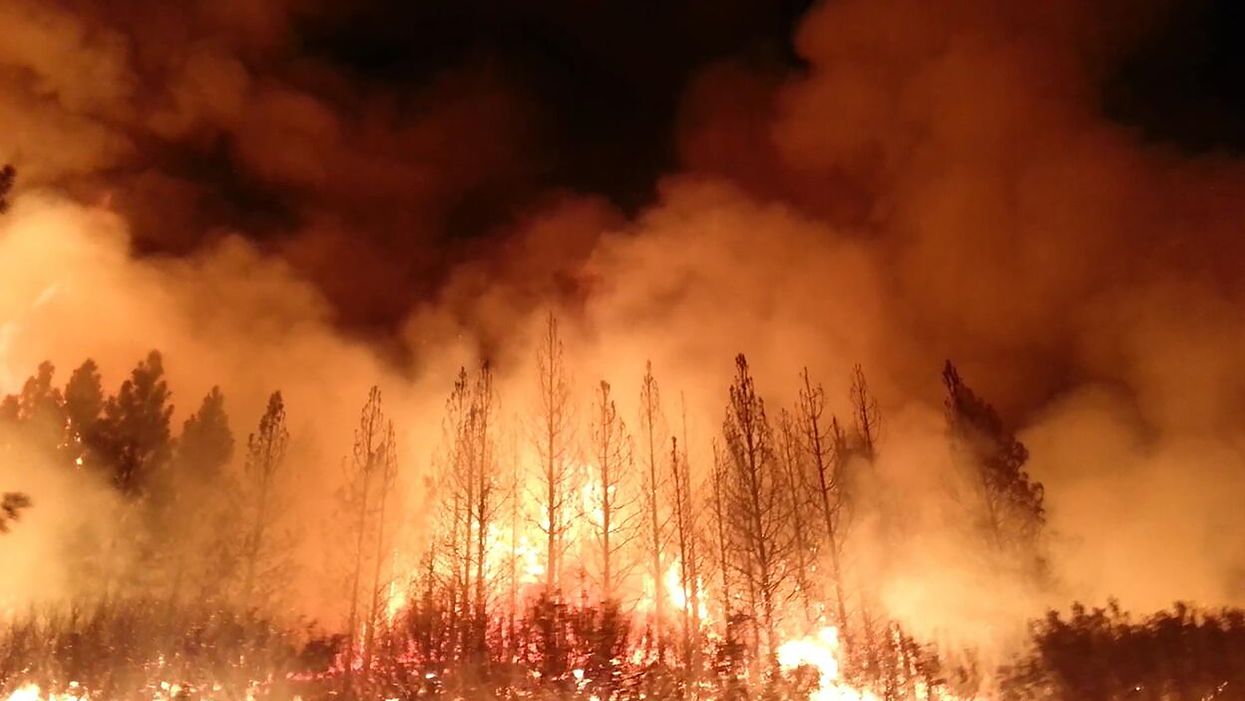 The Rim Fire in the Stanislaus National Forest near in California began on Aug. 17, 2013 and is under investigation. The fire has consumed approximately 149, 780 acres and is 15% contained. U.S. Forest Service photo.
Julia Conley
and
Common Dreams
July 27, 2021

The deadly heat waves recorded in Canada and the United States' Pacific Northwest in recent weeks are likely to become increasingly frequent in the coming decades, according to research published Monday by scientists in Switzerland.

Researchers at the Institute for Atmospheric and Climate Science at ETH Zurich said they conducted their study by examining the rate of global heating rather than the amount of heating recorded, and found that heat waves which break previous records by huge margins, as recent ones have, happen "during periods of accelerated climate warming," as ABC News reported.

"These record-shattering extremes, nearly impossible in the absence of warming, are likely to occur in the coming decades," said the study, which was published in Nature Climate Change. "Their probability of occurrence depends on warming rate, rather than global warming level, and is thus pathway-dependent."

The scientists examined historical climate records and found that records for heat and other extreme weather decreased until the 1980s, when global temperatures began rising at a faster rate.

At the same time, the scientists observed a "very high speed of pace" of heat waves setting new records for high temperatures.

"We should no longer be surprised if we see records smashed by large margins," Erich Fischer, a climate scientist at ETH Zurich and the author of the study, told Reuters.

The research was published weeks after people across the U.S. were shocked to see the normally temperate Pacific Northwest experience temperatures as high as 116 degrees Fahrenheit in Portland, Oregon and 108 degrees in Seattle.

Both cities saw their previous heat records shattered, with Portland experiencing a three-day high temperature that surpassed its previous record by six degrees.

Even after the recent extreme heat waves, Fischer told Reuters, "we haven't seen anything close to the most intense heat waves possible under today's climate, let alone the ones we expect to see in the coming decades."

According to the study, mitigating the human-caused climate emergency by drastically cutting fossil fuel emissions would result in the "notably reduced" occurrence of record-shattering heat waves.

"In high-emission scenarios, week-long heat extremes that break records by three or more standard deviations are two to seven times more probable in 2021 to 2050 and three to 21 times more probable in 2051 to 2080, compared to the last three decades," the study says. "In 2051 to 2080, such events are estimated to occur about every six to 37 years somewhere in the northern midlatitudes."

The study was published as top scientists from around the world met to finalize a landmark report detailing the impacts of the climate crisis on communities across the globe, and as wildfires raged in North America, Siberia, and Italy.

Scientists pointed to the study as the latest evidence that federal and local officials must prepare for record-breaking periods of extreme heat as a new norm in the interest of avoiding the worst outcomes in the Pacific Northwest and Canada, where an estimated 800 people died in the recent heat waves.

"The authors of this study show that this very rapid warming means we must expect extreme event records to be broken—not just by small margins but quite often by very large ones," said Prof. Rowan Sutton of the National Center for Atmospheric Science at the University of Reading. "This highlights the huge challenge to improve preparedness, build resilience and adapt society to conditions that have never previously been experienced."