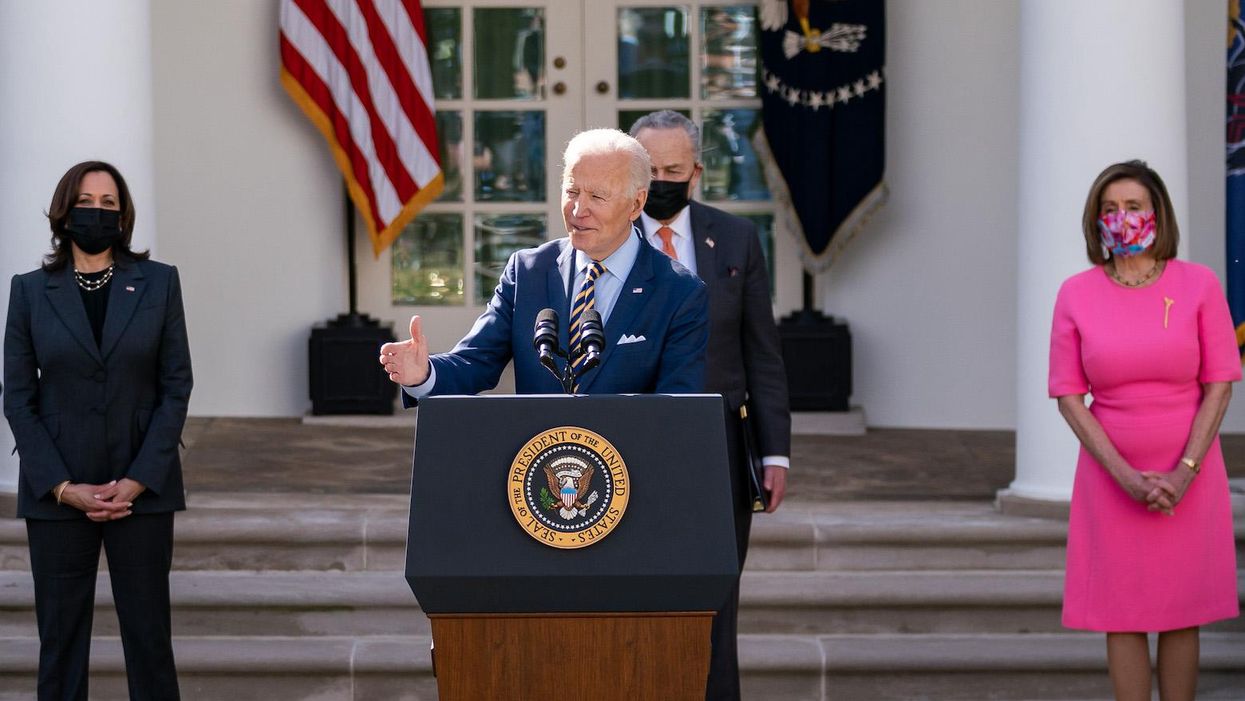 The GOP has been historically against sending money directly to people. They are ideologically opposed to it, but there are practical partisan considerations, too. When a majority of normal people receive aid and comfort from the government, a majority of normal people tends to think highly of it and, in turn, support that government with votes. The Republicans are not stupid. They know that means the Democrats win.

For this reason, it was a stroke of genius, I would say, that the president and the Congressional Democrats built into the American Relief Plan Act the ability to send advanced child tax credit payments directly to normal people's bank accounts. To be clear, the amount of money isn't that much more than what the status quo had been. Americans with kids over 6 had gotten $2,000 per kid; now they get $3,000. But because all this was sorted out at tax time, most people didn't feel it the way they are now feeling it this week as direct payments arrive. I'm guessing lots of people did not even know the cash was coming until they checked their accounts and their eyes popped out.

You can't buy that kind of reaction. Nor can you buy the partisan loyalty that comes with it. You can only do that by thinking politically, which is why the Republicans, even when they come out in favor of "welfare," always insist that it be built into the federal tax code so that people don't really feel the government's support, as it's all wrapped up with getting tax returns filed. In truth, some people might end up owing the government, depending on their earnings for that year. But that won't change the impact being felt this week. At tax time, they'll be too busy getting their taxes done.

The Republicans are responding by raising the boogeyman of "Big Government." I won't bother quoting anyone. (Fine, if you insist, google "Marsha Blackburn"). But the boogeyman isn't what he used to be. It was based on two linked ideas. One, that there's only so much money to go around. Two, that undeserving (non-white) Americans are cheating deserving (white) Americans out of their fair share. The GOP dominated most of the last 50 years with that linked combo. The covid pandemic unlinked it. The government had to step in. It had to float the economy. Sure, there are still white people worried about being cheated, who oppose non-white people getting any help. But plenty more won't care as long as they are getting their fair share. They are.

Advanced payments being sent directly to the bank accounts of normal people are probably going to scramble the effect of the Republican's rhetoric. Think about it. The disgraced former president pretty much campaigned on the idea that you better vote for me or the far-left socialist-communist-totalitarian Democrats are going to win, tank the economy and send us all to the bread lines. All that nonsense was really racist coding. They wouldn't dare smear Barack Obama as a Black man but they did call him a socialist when they weren't calling him a food-stamp president, a post-colonial Kenyan Marxist or denying that he was an American at all. Dog-whistling (or bull-horning) is highly effective when there's a widespread belief that there's only so much money to go around. The pandemic changed that. There is plenty of money with the right political will. And that political will is not coming from the Republican Party.

I don't think the Republicans quite understand this. I don't think most people quite understand the inroads being made by Joe Biden and the Democrats into "populist" terrain previously held by the disgraced former president. Again, think about it. Donald Trump tapped into that great populist strain that's always already present in American politics. He invoked the powerful and enduring image of "the common man." He got average Joes to think of themselves in hard opposition to political elites in both parties. (Hillary Clinton was Trump's antipode. Mitch McConnell is.) At the end of the day, though, he never delivered for "the common man." Not even once. To be sure, he delivered a "good feeling" of seeing "us" stomping "them." But he never delivered materially, not in ways Joe Biden and the Congressional Democrats are delivering, soon with a $4.1 trillion infrastructure package, now with cash money.

Steve Bannon, though evil, was astute when he insisted at the beginning of the former president's one and only term that he push for a $1 trillion infrastructure package. According to Trump's then-advisor, that was key to Trump's "economic nationalism" and to cementing his hold on "the white working class." He said that while the Democrats mewled and puled about racism—what we would now call "cancel culture" and "wokeness"—the president, as "tribune of the people," would deliver in ways no Republican president delivered before, thus rewriting the rules of Washington. That never happened, obviously. For one thing, Bannon got the boot. For another, the Republicans in the Congress didn't want any of that. They kneecapped the president, leaving in their wake endless jokes about the imminence of "Infrastructure Week."

Bannon didn't fear socialism the way most Republicans feared socialism as long as it was a socialism for white people only. In this, he was renewing, or trying to renew but failing, the old Jacksonian democratic spirit, flipping the social and political order, putting the Herrenvolk on top. Joe Biden is similarly but universally "populist." Instead of excluding most people, he and the Democrats are including most people. They are expanding the economic pie, taking populist politics and making it popular so only the cast iron-shelled bigots and ideologues among us feel like an injustice is being done.

With enough normal people feeling enough support from the government over a long enough period of time, it's not hard to imagine the former president's supporters, the ones who are not completely indoctrinated, falling away, perhaps wondering even if all that talk was just talk. At the very least, they might think before voting about how it felt to have a government on their side compared to a government that only said it was.