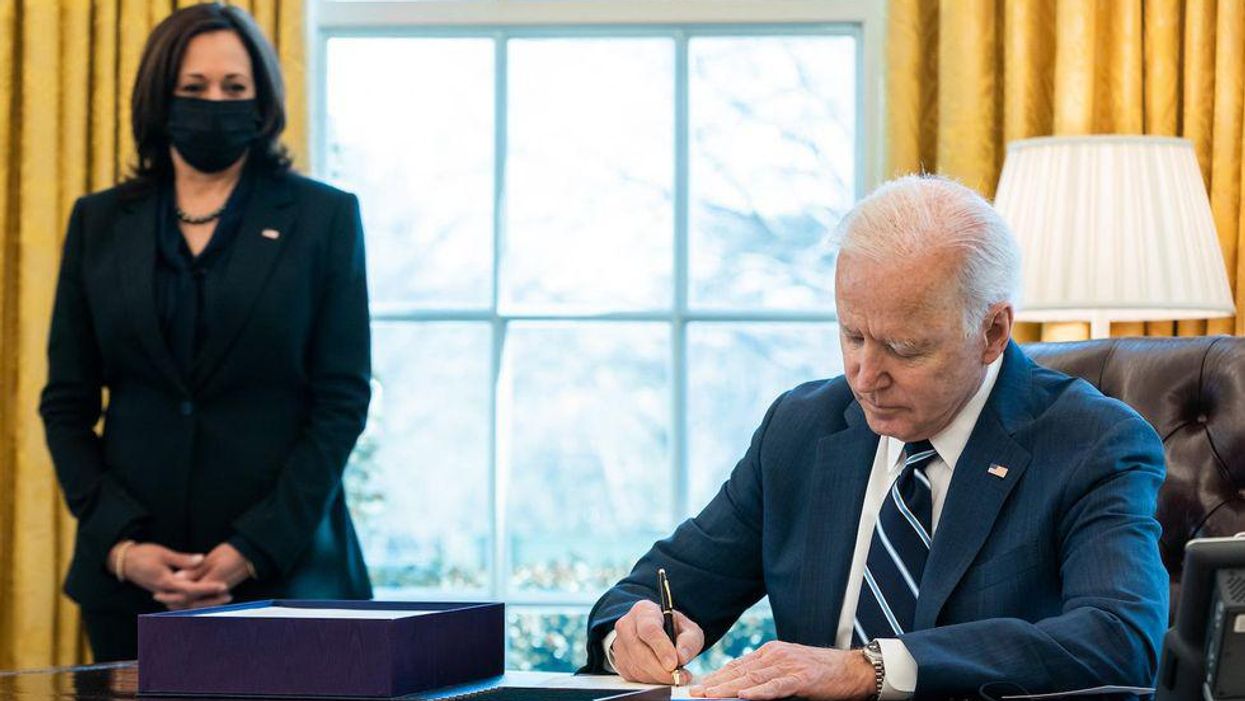 Among the 72 initiatives packed into the far-reaching executive order President Joe Biden signed Friday are steps that labor advocates welcomed as important victories for U.S. workers, including a provision calling for the limitation of noncompete clauses that drive down wages by preventing employees from quitting for better-paying jobs.

Biden echoed that message in a speech on Friday, declaring that corporations use noncompete clauses "for one reason: to keep wages low."

Analysts estimate that tens of millions of private-sector workers are currently under some form of noncompete clause preventing them from leaving their jobs to work for—or start—a competing business within a certain period of time.

HuffPost labor reporter Dave Jamieson noted that while noncompete clauses have "traditionally been used to protect closely guarded business secrets in high-income fields... they have proliferated so much in recent years that they touch all income levels, even low-wage service work."

"In many cases, noncompete clauses are only 'agreements' in theory, since not signing one means not getting the job," Jamieson observed.

Heidi Shierholz, director of policy at the Economic Policy Institute (EPI), said Thursday that "noncompetes are ubiquitous, harmful to wages and to competition, and part of a growing trend of employers requiring workers to sign away their rights."

Biden's decision to take aim at noncompete clauses as part of a broader effort to tackle corporate concentration won applause from unions and progressives advocacy groups, who said the president's order is an important step toward reversing the decades-long trend of stagnant wages and declining worker power.

"We support President Biden's focus on workers and consumers as we seek a more competitive economy," Lee Saunders, president of the American Federation of State, County, and Municipal Employees, said in a statement. "A successful economy must serve the people who produce the goods and services that improve our lives."

Barry Lynn, executive director of the Open Markets Institute, said he is "especially pleased to see the administration move to protect America's most powerless workers and farmers."

"We hope the Biden administration stays on this path and truly stands with the people against those who seek to monopolize all opportunity, wealth, and power for themselves alone," Lynn added.

Other elements of Biden's executive order that seek to empower workers include a provision encouraging the FTC and Justice Department to "strengthen antitrust guidance to prevent employers from collaborating to suppress wages or reduce benefits by sharing wage and benefit information with one another."

In recent years, major corporations—from Google and Apple to McDonald's and Burger King—have entered so-called "no poaching" pacts agreeing not to hire each other's workers, deals that critics say serve to drive down wages and benefits.

The president's order also urges the FTC to prohibit "unnecessary" occupational licensing restrictions, which can hinder workers from moving across state lines to find better-paying jobs in their field.

"The measures encouraged by this EO represent a wish list progressives and other pro-competition advocates have been promoting for years, and in some cases decades," David Segal, director of the Demand Progress Education Fund, said in a statement.

"From a ban on non-compete agreements that suppress wages and keep employees tied to jobs they would rather leave, to pushing for importation of cheaper prescription drugs from Canada—and from helping people switch between banks to addressing anti-competitive behavior in online marketplaces, these initiatives would improve the wellbeing of workers, small and mid-sized businesses, and consumers across essentially all major sectors of the American economy," Segal added.

Alex Harman, the competition policy advocate for Public Citizen, hailed Biden's order as "the most significant executive action against corporate monopolies in generations."

"This EO sends a clear and unambiguous message that corporate concentration throughout our economy is a crisis-level problem," said Harman. "That clarion call has been absent for decades, as administrations of both parties have let antitrust and antimonopoly enforcement fall into disrepair and decay."