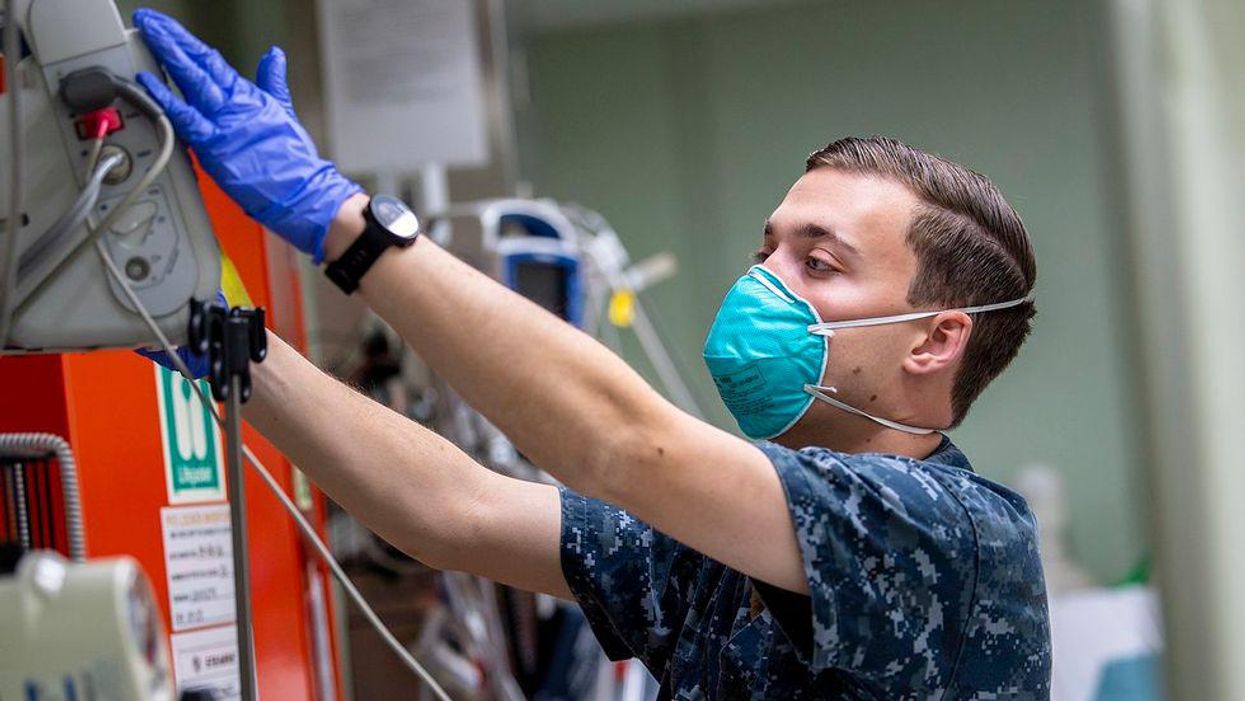 200416-N-PH222-1039 LOS ANGELES (April 16, 2020) Hospital Corpsman 3rd Class Brennan Leary, from Johnstown, Pa., treats a patient in an intensive care unit aboard the hospital ship USNS Mercy (T-AH 19) April 16. Mercy deployed in support of the nation's COVID-19 response efforts, and will serve as a referral hospital for non-COVID-19 patients currently admitted to shore-based hospitals. This allows shore base hospitals to focus their efforts on COVID-19 cases. One of the Department of Defense's missions is Defense Support of Civil Authorities. DoD is supporting the Federal Emergency Management Agency, the lead federal agency, as well as state, local and public health authorities in helping protect the health and safety of the American people. (U.S. Navy photo by Mass Communication Specialist 2nd Class Ryan M. Breeden)
Alex Henderson
July 23, 2021

With hospitalizations for COVID-19 surging in Missouri — especially the highly infectious delta variant — hospital leaders in the Kansas City area are expected to call for new mask mandates, according to the Kansas City Star.

One of them is Steve Stites, who serves as chief medical officer at the University of Kansas Health System and fears that Kansas City-area hospitals are in danger of becoming overwhelmed. Stites, according to the Star, warned his colleagues, "We are past the tipping point. We are in trouble."

During a Thursday morning briefing this week, Stites explained, "I think you are going to find the chief medical officers are going to call for a reinstitution of the mask mandates and social distancing, because we had that discussion this morning — and we were all in favor of it because we're in trouble in the hospitals."

Missouri is a deeply Republican state with a low rate of COVID-19 vaccination. According to the Mayo Clinic, only 47% of Missouri residents have been at least partially vaccinated for COVID-19 — compared to 75% in Vermont or 71% in Massachusetts. The vaccination rate in Arkansas, a deep red state south of Missouri, is 44% — and in Kansas (which is heavily Republican but has a Democratic governor, Laura Kelly), it's 50%. Kansas City, Missouri and nearby Kansas City, Kansas are two separate cities in two different midwestern states.

According to Star reporters Jonathan Shorman, Sarah Ritter and Steve Vockrodt, "Kansas City lifted its mask mandate in May, and Johnson County ended its own rules in April. Nationally, the Centers for Disease Control and Prevention says fully vaccinated people don't need to wear masks in most situations. But Missouri, along with Arkansas, is at the epicenter of a severe outbreak driven by the highly-contagious delta variant. Rising cases and hospitalizations, for a time centered in southwest Missouri, are spreading to more parts of the state, including the Kansas City region."

The Mid-America Regional Council reported that the average of new hospitalizations in the Kansas City area went from 39 on June 8 to 94 on July 20.