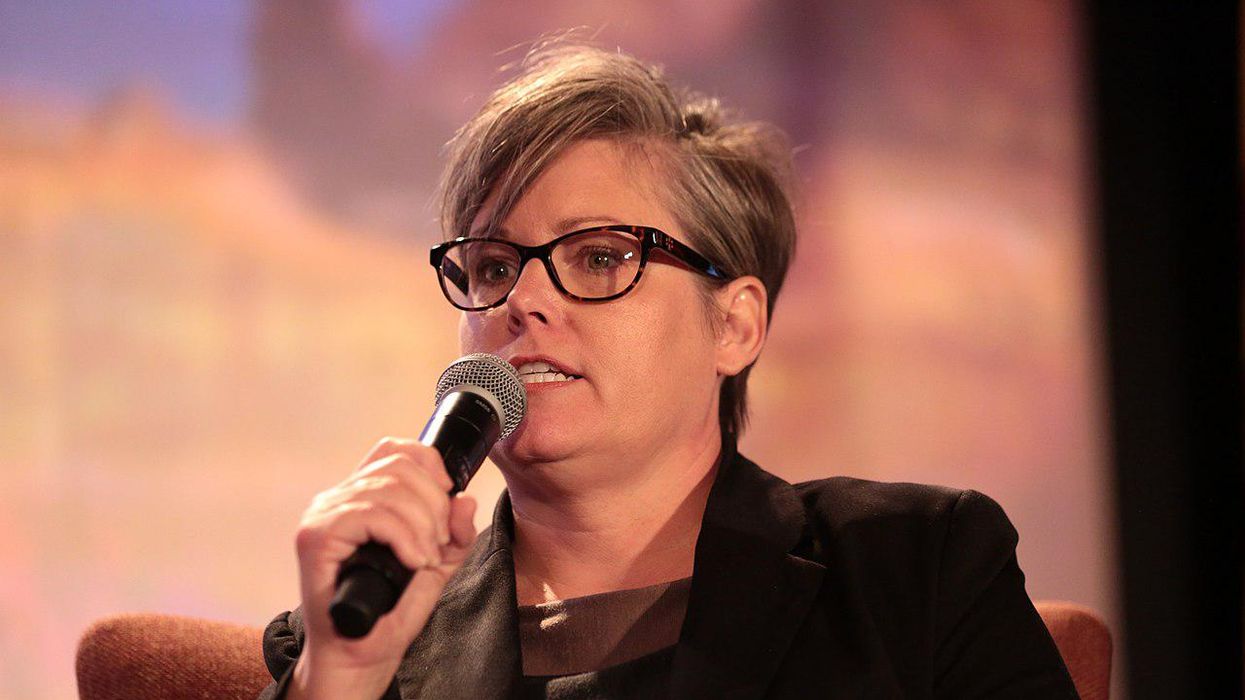 In Maricopa County, Arizona, a bogus "audit" of the 2020 presidential election results is being conducted by the Florida-based firm Cyber Ninjas continues — and Trump supporters are insisting that the "audit" will show that former President Donald Trump really won the state, which of course, he didn't. The Maricopa "audit" debacle is the subject of articles by Arizona Secretary of State Katie Hobbs and Never Trump conservative pundit Tim Miller, both of whom warn that the "audit" will only encourage the Big Lie and the assault on democracy coming from the far right.

After now-President Joe Biden won Arizona, legitimate bipartisan vote recounts were conducted in that state — and those recounts confirmed that Biden won. Arizona Gov. Doug Ducey, a conservative Republican, acknowledged Biden as the winner and certified the election results in his state. The Cyber Ninjas "audit," however, is not a legitimate vote recount, but a fishing expedition. And in an op-ed published by the Washington Post on June 14, Hobbs — who is seeking the Democratic nomination in Arizona's 2022 gubernatorial race — warns that the "audit" is dangerous to democracy.

"Democracy is under siege in Arizona," Hobbs warns. "As part of the Big Lie that Republicans have been pushing about electoral fraud, they're conducting an 'audit' in our largest county, Maricopa, to dig up nonexistent evidence. It's an absurd spectacle. The proliferation of conspiracy theories is staggering: ballots are being disqualified because of sharpies; ballots were shipped in from China; ballots were burned in a chicken-farm fire."

Hobbs adds, "My office won a court order to send impartial observers to the audit, and I try to keep the public informed about its dangers. For insisting on straight-forward truths, I and my family have received death threats. Armed protesters have shown up at my home. Twice, I've been assigned a security detail to protect me."

Far-right Trumpistas are masters of projection. And as Hobbs notes in her op-ed, those who accuse Biden and his Democratic allies of stealing the 2020 election are hoping to steal future elections.

"Most Arizonans — Democrats, Republicans and independents — understand that the audit is a farce," Hobbs explains. "They saw the 2020 election with their own eyes, and they don't want their ballots scrutinized by a shadowy, partisan company. But Republicans aren't just protesting the results of our most recent presidential election; they are laying the groundwork to steal the next one. They are sowing doubt about our electoral process to justify a crackdown on voting rights: The 2020 election was insecure, they say, and so, our next election must be airtight. This twisted logic has propelled voter-suppression laws across the country, in Arkansas, Florida, Georgia, Iowa, Montana and other states."

Hobbs goes on to say that the U.S. Senate is presently "considering two voting rights bills": the John Lewis Voting Rights Advancement Act and the For the People Act, which she notes "would strike down the senseless restrictions that Republicans have rushed to impose." But the For the People Act, Hobbs laments, is "in jeopardy because 50 Republican senators and several Democratic ones are not taking the steps needed to pass it." Hobbs specifically cites Sen. Kyrsten Sinema — a fellow Arizona Democrat — and Sen. Joe Manchin of West Virginia as two Democratic senators who "either do not support the bill or refuse to touch the filibuster."

"Voter-suppression efforts in Arizona are part of a nationwide dismantling of voting rights — the most sustained and egregious assault on U.S. democracy since the Jim Crow era," Hobbs writes. "I am taking what steps I can to fight back on a local level. But I cannot succeed without help from Congress. Please, act decisively and pass the For the People Act. We are running out of time."

Miller, a former Republican, is equally critical of the Maricopa "audit." In an article published by the conservative website The Bulwark on June 15, the anti-Trump conservative slams the "audit" as a dangerous "circus" that will only encourage the Big Lie to continue and empower conspiracy theorists like QAnon.

Miller warns, "The whole Arizona circus is being taken deadly seriously by Trump himself — he called Republican pols who are ignoring the audit 'weak' — and by his radicalized supporters who still want to 'stop the steal'…. Activists in the QAnon movement have described the audit as the first step in 'The Great Awakening.' And Arizona Republican Party Chairwoman Kelli Ward has threatened 'arrests' of those who did not comply with the audit. N.B.: The Arizona Republican Party does not yet have the power to detain citizens for crimes against MAGA…. One America News has hired a local propagandist, Christina Bobb, to 'cover the audit' — while also fundraising for it."

The Never Trump conservative laments that the Big Lie will persist after the Cyber Ninjas' "audit" concludes.

"Sometime soon, the results of the Arizona audit will be brought forth," Miller writes. "It seems quite likely, given the participants, that the auditor ninjas will claim that Donald Trump won Arizona. Or probably won Arizona — who can say! Or would have won Arizona, if not for those meddling kids. And if this happens, the former president and his MAGA media echo chamber will once again stoke the flames of insurrection. Q-adherents will convince themselves that one of the seven seals has been revealed. Millions — tens of millions — of Republicans throughout the country will believe it. And some of them will demand action."

"So, when the Arizona audit bell tolls, what exactly is McConnell and McCarthy's plan?," Miller writes. "Because it sure looks as though they are dooming us all to repeat the same history we just lived through, humoring Trump's delusions and hoping that none of their supporters die in their imaginary fight for freedom this time."