Almost all COVID-19 deaths now are among the unvaccinated: analysis 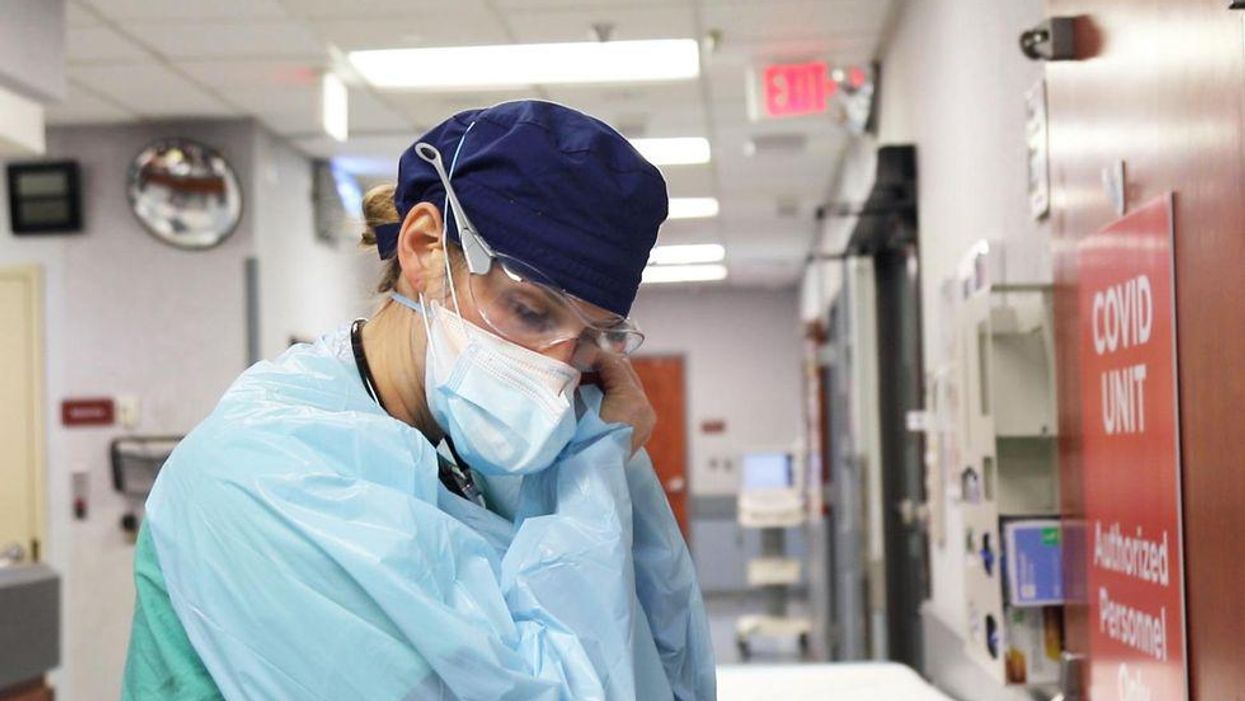 U.S. Air Force Capt. Kimberly Warstler, R.N., stationed at Keesler Air Force Base, Miss., dons proper personal protective equipment to enter a room with a COVID-19 positive patient at the Del Sol Medical Center in El Paso, Texas, Nov. 13, 2020. Warstler is a Lone Star State native, having received her nursing degree from Texas Tech University, and says she's proud to return to help during the COVID-19 pandemic. She, along with approximately 60 service members, are working jointly with the civilian hospitals to assist in the mitigation of the virus and help citizens in need. U.S. Northern Command, through U.S. Army North, remains committed to providing flexible Department of Defense support to the Federal Emergency Management Agency in support of the whole-of-America COVID-19 response. (U.S. Army photo by Sgt. Samantha Hall)
Dartagnan
and
Daily Kos
June 27, 2021

In a testament to the incredible effectiveness of the mRNA vaccines developed to combat COVID-19, an analysis by the Associated Press shows that nearly all U.S. deaths attributable to the SARS-CoV-2 virus at this point in time are happening to individuals who have not been fully vaccinated.

As reported by Carla K. Johnson and Mike Stobbe for the Associated Press:

Nearly all COVID-19 deaths in the U.S. now are in people who weren't vaccinated, a staggering demonstration of how effective the shots have been and an indication that deaths per day — now down to under 300 — could be practically zero if everyone eligible got the vaccine.

The AP analysis found that the rate of "breakthrough" infections (infections to people fully vaccinated) accounted for only .1% of all COVID-related hospitalizations, based on CDC-supplied data for May 2021, while the number of deaths to fully vaccinated people was less than one percent.

It should be noted that the CDC itself did not conduct such an analysis, citing limitations in the data. For example, as the AP reports, only about 45 states report so-called "breakthrough" infections, and the degree to which such infections are identified varies from state to state depending on the extent and quality of their investigations. Still, the overwhelming effectiveness of the vaccines in preventing hospitalizations and deaths appears clear from the AP analysis. While this news is not particularly startling—after all, that's the reason the vaccines were developed in the first place—it may give serious pause to those who for whatever reason have intentionally declined the vaccine despite being eligible for it.

As the AP article notes:

CDC Director Dr. Rochelle Walensky said on Tuesday that the vaccine is so effective that "nearly every death, especially among adults, due to COVID-19, is, at this point, entirely preventable." She called such deaths "particularly tragic."

One tragic example cited in Johnson and Stobbe's article is the case of Ross Bagne, a 68-year old resident of Cheyenne, Wyoming. Eligible for the vaccine in February and planning to retire, he declined to get it, feeling that he did not venture out enough to be infected.

He was wrong. Bagne died on June 4, after spending three weeks in the hospital, his lungs filled with fluid. His sister blames the state of Wyoming for failing to emphasize the danger.

But what exactly was happening in Wyoming during the time when Bagne's sister felt the state's messaging could have been better in informing and protecting its citizens?

In February of this year, while Bagne eagerly planned for his retired life, Wyoming's Republican governor, Mark Gordon, fully reopened barbershops, nail salons, tattoo parlors, and other "personal care" services throughout the state. In March of this year when Bagne was still very much alive, Gordon (who himself had contracted a mild case of COVID-19 in November) lifted the state's mask mandate. In May, with Bagne still living, Gordon issued an edict banning "vaccine passports" (a thing that doesn't exist).

In January, when the state's Republican-dominated legislature opened its legislative session, most members celebrated by openly defying the state's mask mandate. State police present during that session, under the governor's jurisdiction, did not try to enforce the mandate. Several of the legislators cavorting maskless that day had previously characterized Gordon as a "tyrant" for imposing the mandate in the first place. Democrats, for the most part, stayed away.

One newly elected Wyoming state senator, Troy McKeown, reportedly claimed that the death rate from vaccinations was almost as high as the death rate from COVID-19 itself. As late as May of this year, McKeown was still claiming that the effectiveness of the vaccines was "unknown."

These attitudes may explain why the most vaccine-hesitant counties in the entire country are all in Wyoming, and why Wyoming currently has one of the nation's lowest vaccination rates (28% fully vaccinated at the end of May). As Kim Deti, the spokesperson for the state's health department explains in this article from Wyofile.com:

One of the most difficult obstacles, Deti said, is the politicization of COVID-19.

"It's unfortunate, but it's a reality that we do face," Deti said.

As such, any efforts to increase the vaccination rate also raise political questions. Even taking the position that people should get vaccinated has political consequences, Sen. Chris Rothfuss (D-Laramie) said.

Wyoming has no shortage of "anti-vaxxers," but as Deti obliquely confirms, most of this vaccine "hesitancy," in Wyoming and elsewhere, is ultimately traceable to the mismanaged response to the pandemic by the Trump administration. The minimization and belittling of protective measures, the reckless, premature reopening of businesses, and the actions of Republican state legislators eager to demonstrate their pro-Trump bona fides all contributed in some way to the reluctance and refusal of people to be vaccinated. As a result, it is in these states and other areas where the unvaccinated rate remains high that most COVID-19 deaths will now be occurring, according to the AP:

The preventable deaths will continue, experts predict, with unvaccinated pockets of the nation experiencing outbreaks in the fall and winter. Ali Mokdad, a professor of health metrics sciences at the University of Washington in Seattle, said modeling suggests the nation will hit 1,000 deaths per day again next year.

The bottom line? For those who remain unvaccinated, the pandemic is just as bad as it ever was.