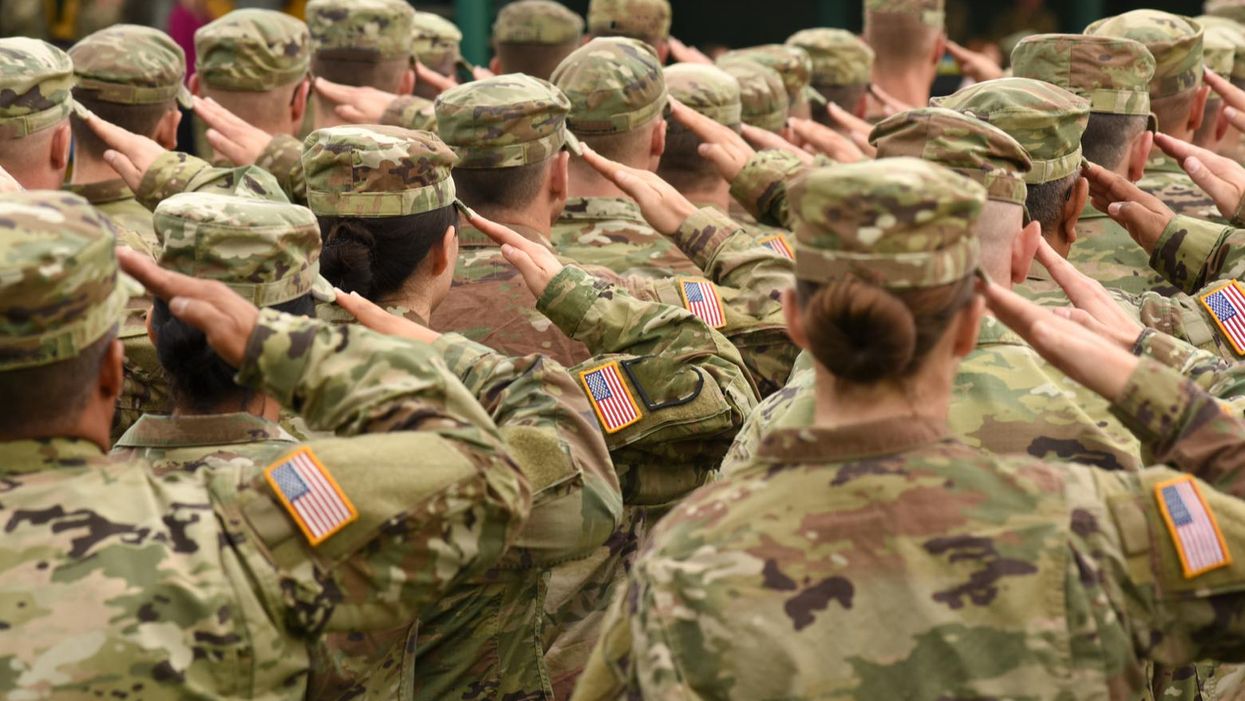 America's love affair with lunacy continues undimmed. Along with flat-earthers, anti-vaxxers, and fans of perpetual motion, according to a May 21 Ipsos poll, 53 percent of Republicans now assert that Donald Trump is the current president of the United States.

There is a tendency in the reality-based community to regard these folks as obscure lunatics who yell at their TVs in trailer parks when they're not ruining a relative's Thanksgiving dinner. Unfortunately, this epidemic of delusional belief embraces a more exalted layer of the social spectrum, a group on which the maintenance of our democracy—deeply flawed as it is—may hinge.

This May, 124 retired generals and admirals published an open letter claiming that President Joe Biden stole the election. Traditionally, this letter would have been unthinkable, but a sizable contingent of former flag officers—people whose decisions once held lives in the balance—has gone full QAnon, writing: "Under a Democrat Congress and the Current Administration our Country has taken a hard left turn toward Socialism and a Marxist form of tyrannical government which must be countered now by electing congressional and presidential candidates who will always act to defend our Constitutional Republic."

(A small but telling note: the letter employs the phrase "Democrat Congress," a grammatical barbarism that has done duty as a rhetorical device for Republican operatives for at least 40 years, demonstrating that the signatories are rabid political partisans rather than constitutional scholars).

The screed goes on, asserting that "we are in a fight for our survival as a Constitutional Republic like no other time since our founding in 1776," a claim that makes us wonder how the signers ever graduated from their service academies, since a little incident called the American Civil War is an important part of the academies' military history curricula.

They also question "the mental and physical condition of the Commander in Chief." Given the endorsement of the letter by a raving lunatic like Lieutenant General William Boykin and convicted Iran-Contra criminal Vice Admiral John Poindexter, one just might infer a degree of psychological projection on the part of the signers.

The letter garnered condemnation from other retired officers and military analysts, but also a surprising complacency from former Joint Chiefs of Staff chairman Admiral Mike Mullen, who noted that no retired four-stars signed it and only a handful of three-stars: "It's not very senior… In our world it's not very significant in terms of people."

It may be cold comfort that there are "only" retired three-stars on the letter, but what about those officers who are still serving?

It turns out that the same month the letter appeared, a lieutenant colonel was removed from his command after appearing on a conservative podcast touting his book Irresistible Revolution: Marxism's Goal of Conquest & the Unmaking of the American Military, which claims that Marxist ideologies have infiltrated the military.

It is noteworthy that he was only cashiered after the podcast, whereas the book already was in print. Previously, it would have been inconceivable that a military officer could even receive permission to write an ideological screed like that. Ordinarily, they are allowed to write freely on military or technical topics, but political diatribes are strictly off-limits. Someone in the command structure was very lax.

Nevertheless, it was predictable that the Right would see him as a persecuted member of the military who fell afoul of political correctness. And sure enough, Matt Gaetz came through.

There is considerable irony in the fact that both the letter and the colonel's rant denounce "socialism," the premier bugaboo of right-wingers everywhere. At one level, it is of course the usual childish nonsense that has been disseminated for decades by the kind of mentality that once denounced fluoridation as a Bolshevik plot. Yet in a sense that is quite the opposite of what they intend, these people might have a point about socialism infiltrating the military.

All these self-styled guardians of the Republic, whether retired flag officers luxuriating in their beach-front homes in San Diego, or active-duty military vandalizing the capitol building, are beneficiaries of socialism. Their profession has a 20-year retirement, free lifetime health care for retirees, housing allowances, food allowances, privileges at heavily-subsidized commissaries and PXs (which, fittingly, somewhat resemble the special stores the old Soviet nomenklatura had), free fitness centers, golf courses, and the list goes on.

With the demise of the Soviet Union and the capitalist transformation of nominally "Red" China, socialism as a hegemonic political system is confined to backwaters like North Korea. The U.S. military is now the biggest socialist enterprise remaining on earth.

For officers, particularly those with experience in weapons acquisition, the gravy train doesn't end with retirement. Aside from their retirement pay and other continuing benefits, they can snag a job with a defense contractor to peddle influence with their former colleagues. Far from being private enterprise, defense firms like Lockheed Martin or Northrop Grumman are hothouse plants, sustained only by the contracts the military steers to them; they would wither and die if subjected to the cold winds of actual market competition.

Proof of this is the F-35 fighter. The most expensive weapons program in history, the plane has been a snake-bitten fiasco from its inception, and it demonstrates that nothing succeeds like failure—as long as it's too big to fail. As an engineering disaster, the F-35 ranks with the Soviet reversal of the flow of rivers into the Aral Sea.

No one can seriously argue that those who bear the brunt of battle should not be adequately compensated and granted all necessary benefits. The problem is that the vast majority of combat casualties are enlisted personnel, and only a small percentage of these will serve long enough to receive retirement pay, whereas colonels and generals by definition have enough service to receive retired pay as well as all the other benefits.

It doesn't end there. Congress usually appropriates an annual military pay raise. The brass, of course, insist that these be across-the-board. Let's say the pay raise is 3 percent. That means a buck private at $21,420 per year base pay gets a modest increase—$643—while a lieutenant general, at $199,296 base pay, receives almost $6,000. It amounts to socialism for the better-off, and it is curiously just like all the tax cuts of the last four decades: a windfall for the rich, crumbs for the working stiff. Each succeeding year of military pay raises will only increase the disparity.

The rationale for across-the-board pay raises is as an incentive in hold onto those with valuable skills. While this makes sense to keep a jet engine mechanic for whose talents a commercial airline will pay a premium, I am unaware that we have any difficulty retaining generals. In the case of my hypothetical lieutenant general, he also will likely be provided with a representational house, complete with an enlisted cook and driver, in order to ease the strain of command.

We can be rather safe in assuming that those 124 retired flag officers who wrote the letter decrying socialism knew whereof they spoke from their own deep personal experience: at the commissaries where they shop, and from the free health care they receive to the cut-price gin fizzes they drink at the local officers' club.