Self-proclaimed Parler investor Dan Bongino claimed he was leaving Twitter to own the libs. Now he's back

Fox News host Dan Bongino has returned to posting on Twitter after telling his supporters in January of this year that he would be leaving and never returning to the "anti-American" social platform after giving it up for Parler, the right-wing alternative where Bongino has claimed to be an investor.

Bongino, a rising conservative media heavyweight, even told Twitter to "fuck off" while pledging he would never return to the popular social media site. "I'll make my last post, my one final 'Fuck you' to Twitter — and you can print that, by the way — tomorrow," the firebrand told The Wrap back in January.

"This will be my final post on this anti-American platform. The greatest threats to liberty are the destructive tech tyrants who have acted as publishers," Bongino declared. "You can find me on Parler," he added. 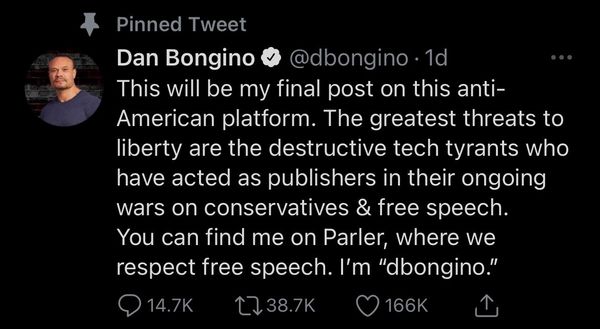 But sometime in May, only five months after declaring he was leaving Twitter for good, Bongino's account became active again, retweeting right-wing content. In early June, Bongino suddenly started posting again, never mentioning his departure or his vows not to return.

"Lt. Gov. Mark Robinson to Appear on Unfiltered With Dan Bongino," he tweeted on June 12 from his iPhone.

Bongino didn't respond to multiple Salon requests for comment on this story.

It's unclear exactly what prompted Bongino's return to Twitter, but there's plenty of speculation as to why the tough-talking former Secret Service agent has reversed field. For starters, Parler, in which Bongino claims to be an investor, is on the skids after the Jan. 6 Capitol riot, with the platform being booted from Amazon's web services and hosting platform.

Since then, as Salon has reported, Trump supporters and MAGA loyalists have apparently started bailing out on Parler following a series of extended blackout periods. To this day the site remains extremely glitchy and it's clear that Trump supporters or other denizens of the far right are dubious that it offers a viable platform for the future.

Another possible reason why Bongino may have fled Parler lies in the theory that he got hustled by right-wing billionaire Rebekah Mercer and never received actual shares in the social media company, a claim made by former Parler CEO John Matze in court documents filed in March. Bongino has fervently denied Matze's allegations, although Bongino has also publicly distanced himself from day-to-day operations at Parler.