What the Tulsa race massacre destroyed 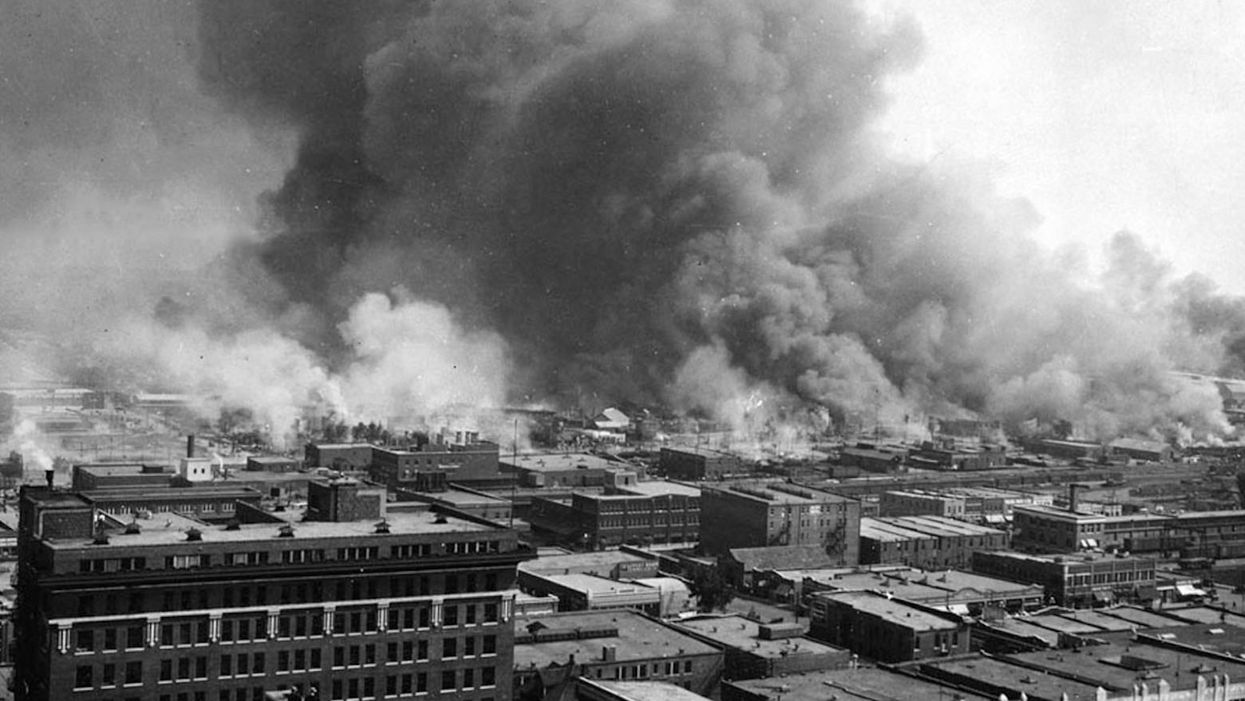 The "Little Africa" section of Tulsa, OK in flames in 1921

One hundred years after the worst instance of racist mob violence in 20th-century America, the Tulsa Race Massacre is finally getting the attention it is due. The 1921 terrorist attack by an armed white mob against a prosperous Black community is perhaps one of the clearest and most extreme illustrations of how many African Americans were stripped of their wealth for a generation.

In the span of just 24 hours, an army of deputized white men devastated the Greenwood District in Tulsa, Oklahoma, burning down what had been known as "Black Wall Street," and killing hundreds of residents and business owners. There has never been a full accounting of the murder and mayhem unleashed upon the community, and some estimates put the minimum death toll at 300.

While major media outlets are finally covering this dark incident as a symbol of historic white supremacist violence, a critical lesson of the Tulsa Race Massacre is how economic injustice was foisted upon Black America and how wealth was stripped out of the hands of those few Black Americans who found success within a capitalist system.

Professor Karlos K. Hill, department chair and associate professor of African and African American Studies at the University of Oklahoma, is one of the nation's preeminent scholars on the history of racial violence and the author of The 1921 Tulsa Race Massacre: A Photographic History. He explained to me in an interview that "the Greenwood District [of Tulsa] was perhaps the wealthiest Black community in the country" and a "symbol of what was possible even in Jim Crow America." According to Hill, Greenwood's 11,000 Black residents lived in an area that was home to hundreds of successful businesses and included four millionaires and six near-millionaires—in today's dollars. It was Booker T. Washington who in 1913 famously called Greenwood the "Negro Wall Street."

In a single day, all that was built was destroyed. "The Greenwood District and its affluence drew the ear of whites," said Hill. He argued that the armed white mob and its supporters "saw in Greenwood not just [their own] resentment of Black economic wealth accumulation, but they saw in Greenwood the future." In other words, "the fear was, if Black people could have economic and political equality, then social equality would follow right behind." And that was a threat to the foundations of Jim Crow segregation.

One survivor of the massacre, 107-year-old Viola Fletcher, testified to Congress a few weeks ahead of the 100th anniversary and recalled growing up as a child in Greenwood in "a beautiful home" with "great neighbors and… friends to play with." "I had everything a child could need. I had a bright future ahead of me," she said. A few weeks after Fletcher turned seven, the armed men struck on May 31, 1921. After recounting the "violence of the white mob," and her memories of seeing "Black bodies lying in the street" and "Black businesses being burned," she went on to describe the grinding poverty she was thrown into as a result of the massacre.

Fletcher never made it past the fourth grade in school. The promising future that her family had worked hard to give her was obliterated in the ashes of the Tulsa Race Massacre. "Most of my life I was a domestic worker serving white families. I never made much money. To this day I can barely afford my everyday needs," she told lawmakers during her testimony.

The Tulsa Race Massacre was unusual in its scope, the ferocious speed of its destruction, and the extent of prosperity that was decimated. But it was not unusual in that there were relentless pogroms against Black communities, especially between the years of 1917 and 1923—so much so that one report characterized the period as "a reign of racial terror after World War I, when whites rose up to quash prosperous Black communities."

President Joe Biden's proclamation on the 100th anniversary of the Tulsa Race Massacre and his moving speech in Greenwood went much further than any president has ever gone to acknowledge the horrors of Tulsa and to offer a starting point for justice. Short of making a case for reparations, his announcement of "New Actions to Build Black Wealth and Narrow the Racial Wealth Gap" is also a far more progressive nod to systemic race-based economic injustice than we might expect from the White House.

While Hill admits that Biden's "plan is a good start," he maintains, "it's not sufficient." "We need to stay focused on reparations for victims, survivors, and descendants," he said. Indeed, the Tulsa Race Massacre Commission, which was created more than two decades ago by the state of Oklahoma, recommended reparations that "involve compensation at the individual and community levels." In reflecting on what Fletcher's life might have been like had her family's wealth and her community not been burned to the ground, we can only imagine what was lost for her as an individual, and for generations of Black Americans like her as well as her descendants.

Today Black activists, leaders, and advocates are demanding a reckoning of racial violence and the systemic stripping of wealth from Black communities. The Movement for Black Lives, for example, explicitly calls for "economic justice for all and a reconstruction of the economy to ensure Black communities have collective ownership, not merely access." There is a direct link between the U.S.'s macabre history of racialized violence and contemporary forms of systemic racism that are designed to suppress Black success and wealth building. Study after study proves ongoing discrimination against Black Americans in home mortgages, rental housing, employment, wages, and college admissions, so much so that it hurts the economy as a whole.

And yet white conservatives still refuse to accept that the American economic system is designed to benefit them at the expense of people of color and especially Black people. Hill maintained, "We need to think bigger and more aggressively about the ways in which systematic racism has not just reduced Black wealth but made it impossible to build."

The latest front in the right-wing culture war is a bizarre new campaign against the field of "critical race theory" being taught in academic institutions. In fact, in the same year when the centennial of the Tulsa Race Massacre occurred—when a U.S. president finally gave an unprecedented acknowledgment of the event, and when the history of racist violence in Tulsa has finally begun to gain the prominence it deserves—the state of Oklahoma banned the teaching of critical race theory. Hill roundly denounced the move, saying, "it is so offensive that this state on the 100th anniversary of the race massacre would pass such a bill. It's so maddening, it's so frustrating, it's such a slap in the face." Perhaps because this is precisely the educational framework that can help young Americans analyze the history of racialized economic injustice, today's white conservatives see it as a threat to the maintenance of their racial and economic privilege.

During her testimony about surviving the Tulsa Race Massacre, Fletcher warned, "Our country may forget this history, but I cannot. I will not… and our descendants do not."