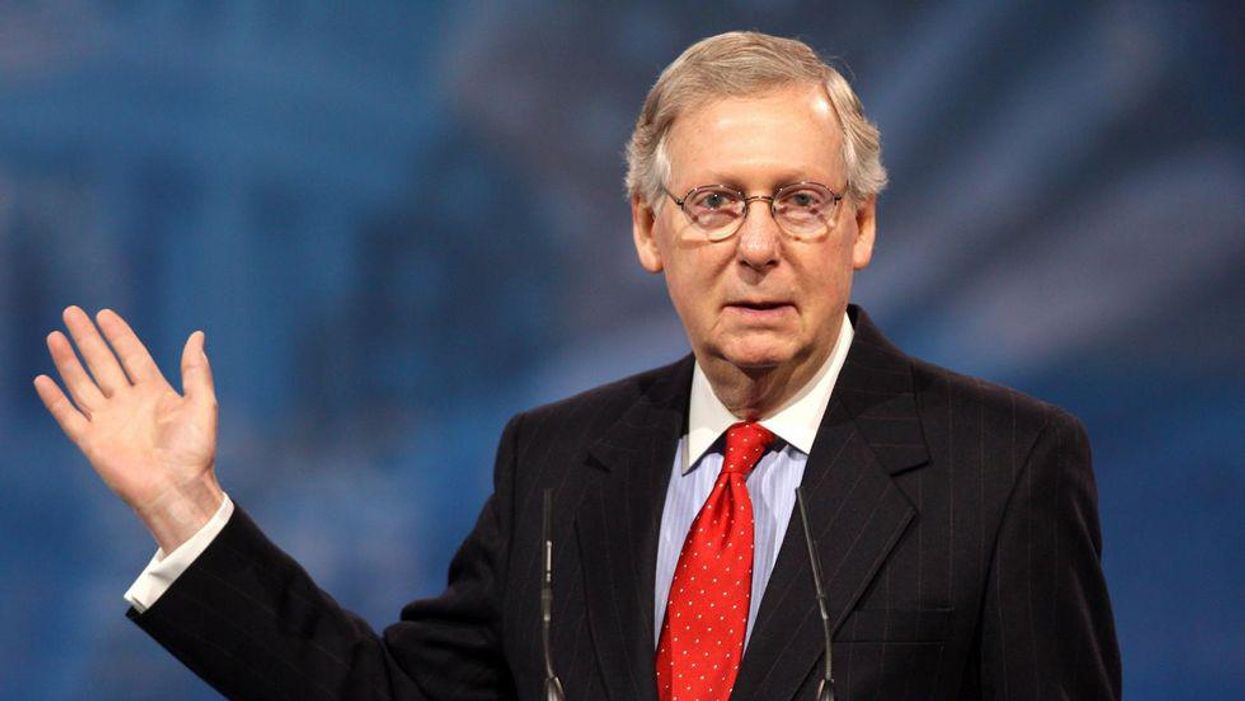 Donald Trump is whining again. Sure, he never actually stopped, but with Trump deprived of his Twitter account, the public has at least been spared from most of his whining — except when he takes the time to format his whining as a press release from his latest money-making scam. On Monday, Trump again took the time to get an assistant to write down his latest diatribe against Senate Minority Leader Mitch McConnell, R-Ky., who Trump still blames for failing to successfully help him steal the 2020 election.

"He never fought for the White House and blew it for the Country," Trump raved in the, uh, "statement," apparently going so far as to force whoever is writing this down to include the random capitalizations that the 2020 election loser was famous for using on his now-defunct Twitter account.

"Too bad I backed him in Kentucky, he would have been primaried and lost!" Trump continued to rail against McConnell.

Whatever incoherent point Trump thinks he's making, however, the real reason for the tantrum is hardly a mystery. There's a new report highlighting how skeptical McConnell was of Trump's attempted coup in its final weeks. In the Atlantic over the weekend, ABC News reporter Jonathan Karl published an excerpt from his new book about Trump's attempts to steal the 2020 election, titled "Betrayal." For the book, Karl interviewed former Attorney General and Trump's chief cover-up operative Bill Barr, who used this opportunity to portray both himself and McConnell as coup skeptics.

"Publicly, McConnell had said nothing to criticize Trump's allegations, but he told Barr that Trump's claims were damaging to the country and to the Republican Party," Karl writes. McConnell felt Trump's constant election lies were hurting the chances of GOP candidates in a Senate run-off in Georgia, but "also believed that if he openly declared Biden the winner, Trump would be enraged and likely act to sabotage the Republican Senate campaigns in Georgia."

As Heather "Digby" Parton noted Monday at Salon, no one should be fooled by Barr's attempted reputation rehabilitation, because "nobody pushed [the Big Lie] harder than he did" and Barr only pulled out when "the writing was on the wall" that Trump would fail. And as I pointed out in Tuesday's Standing Room Only newsletter, by his own admission, Barr's objection to Trump's coup was not about immorality, but rather incompetency.

McConnell's thinking is much the same.

No one should be fooled by this claim that McConnell was worried that the Big Lie was "bad for the country," as Karl credulously writes. McConnell has never once put the good of the nation before his own will to power. Remember, a week into the attempted coup, McConnell publicly backed Trump's play, giving a speech on the Senate floor in which he declared that Trump is "100% within his rights" and putting a gloss of legitimacy on Trump's lies.

Like Barr, McConnell only cut bait when he realized that Trump's coup was failing. But he's even worse than Barr, if such a thing is possible, because McConnell has been doing everything in his power to cover up Trump's crimes and make sure that, next time Trump tries to steal an election, he succeeds.

First and foremost, McConnell made absolutely sure that Trump would be acquitted in the Senate on charges of inciting the insurrection, even though he knows full well Trump is guilty. We know this, because McConnell quite literally said "Trump is practically and morally responsible for provoking" the Capitol attack on January 6. But McConnell provided a B.S. cover story to the GOP caucus, pretending to believe that you can't impeach a president after he leaves office, to justify this acquittal. It was a classic McConnell move of covering his bets, making sure that Trump is both condemned and acquitted, so that McConnell can claim to have been with the GOP base whether they keep supporting Trump or finally turn on their orange messiah.

More importantly, McConnell is playing defense for the nationwide Republican effort to smooth the path for Trump to steal the next election. As we've covered extensively at Salon, Republican-controlled state legislatures are busy passing laws to suppress voter turnout and make sure that, if Democrats win anyway, election officials are set up to nullify the results of the election. The Senate could stop these efforts, by passing a bill that would ban such election manipulation on the state level. But McConnell has made sure to keep the GOP caucus unified behind efforts to filibuster any such bill.

But make no mistake — McConnell is still Trump's strongest ally in Washington D.C.

As long as Trump is intent on undermining democracy, McConnell will be on hand to help. His only objection to Trump has ever been a concern that Trump is going to screw this up. McConnell's strategy is what it has always been, which is to try to stay out of the blast radius if Trump implodes, but to also make sure that Trump has the support and resources he needs to destroy democracy. That hasn't changed a bit, no matter how many whiny statements Trump releases.