Trump may have conspiracy-theorized his way to defeat and thought Democrats would replace Biden: new book 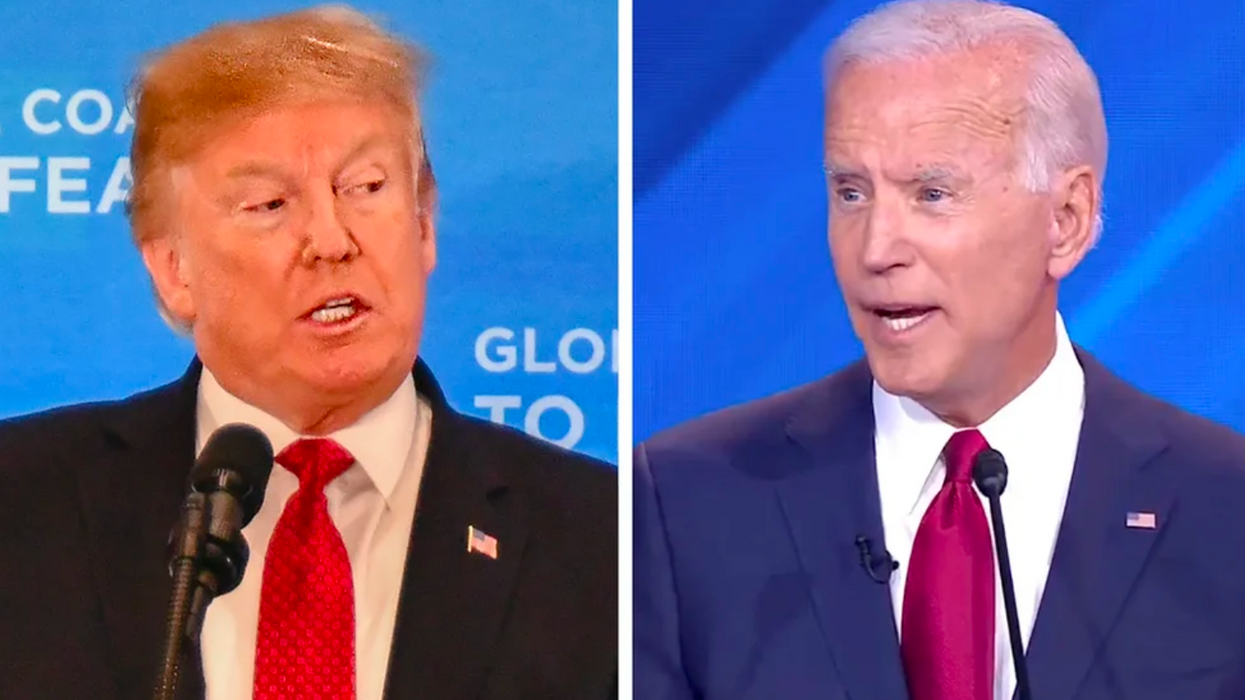 President Donald J. Trump delivers remarks at the Meeting of the Ministers of the Global Coalition to Defeat ISIS at the U.S. Department of State in Washington, D.C., on February 6, 2019. [State Department photo by Ron Przysucha/ Public Domain] / ABC News screenshot
Jonathan D. Fitzgerald
and
Daily Kos
June 08, 2021
So I may be burying the lede on this one—on purpose for once. The buried bit involves a bit of classic Trumpian projection that, sadly and predictably, ventures into the offensive. (Skip ahead if you want to see it. I'll never know.)
But first, let's take a look at the most revealing part of the new book by Wall Street Journal repor Michael Bender, Frankly, We Did Win This Election: The Inside Story of How Trump Lost

For this reason, Trump reportedly came under the delusion throughout the summer prior to the election that the Democrats would be forced to replace Biden with someone else. And as a result, Trump took his eye off Biden.

In another moment Bender writes that Trump held back on focusing his firepower on Biden during the primary stage of the election because he was convinced that the Democratic Party was scheming to switch out now president Biden for a different candidate—such as HillaryClinton or Michelle Obama—over the summer. The source of this conspiracy theory, per Bender, was DickMorris, a former Clinton White House adviser who was "quietly advising Trump" last year. "Dick Morris told Trump that Biden was too old and too prone to gaffes to be the nominee," Bender writes, while others in Trumpworld felt Biden would exit the race and be replaced by someone else if Trump began bashing him too hard. "Others said Fox News anchor SeanHannity expressed concern that Biden would collapse under a sustained attack from Trump."

So that's why Trump acted like an IBS sufferer getting a ghost pepper enema during the entire first debate. He thought Biden, who's been winning elections for nearly 50 years, couldn't handle the word-salad salvos coming from the loudest, dumbest man ever to set foot in the Oval Office. Bad move there, chuckle farts.

Oh, and he was listening to Dick Morris? This Dick Morris? Oh, well. Sadly, this isn't the first time Morris has put his foot in someone else's mouth. Personally, I'd take political advice from an absinthe fairy before I'd ever listen to Morris again.

But Trump could not be deterred from sticking his preternaturally pendulous gonads in a sausage grinder (metaphorically, I assume).

"The president, meanwhile, had often complained that his early attack on [Elizabeth]Warren had damaged her presidential bid, which he regretted because he viewed her as an easier opponent than Biden," Bender writes. "Now he worried that a heavy blitz of attack ads would hasten the secret plot being hatched by Democrats, and his mind raced with who they might select in Biden's place." During a meeting held the month after the coronavirus outbreak hit the U.S., Trump expressed his Biden replacement theory to advisers, saying that Democratic leadership would "realize [Biden is] old, and they're going to give it to somebody else. They're going to give it to Hillary, or they're going to give it to Michelle Obama."

How did he ever lose with such keen political instincts? Maybe Lin Wood and the Pillow Man have a point.

Of course, that's not how political primaries work. You don't just take the presumptive nominee and replace him with a former first lady. But then Trump never really learned much about politics—probably because it was his job, and he was expected to do it competently.

Now, not only was Trump's theory off the deep end (and over the event horizon), it also likely had a corrosive effect on his prospects, because it affected his campaign strategy. According to Bender, Trump had cited this belief "as a reason to hold off on heavy spending against Biden earlier in the month."

Oh, and as for that buried lede?

In early 2020, a frustrated and furious Donald Trump described Joe Biden as "a mental retard" while struggling to cope with his own placement in early polls, according to a passage from "Frankly, We Did Win This Election": The Inside Story of How Trump Lost, a forthcoming book by senior Wall Street Journal reporter Michael Bender. The author notes that Trump vented his anger at the time by interrupting "a policy meeting in the Oval Office to ask, 'How am I losing in the polls to a mental retard?'"

Either way, Trump lost. Because he's irredeemably dense. And then the GOP lost two Senate seats ... for precisely the same reason.

Hopefully he keeps telling his followers that our elections can't be trusted. Now that's a winning message for 2022.