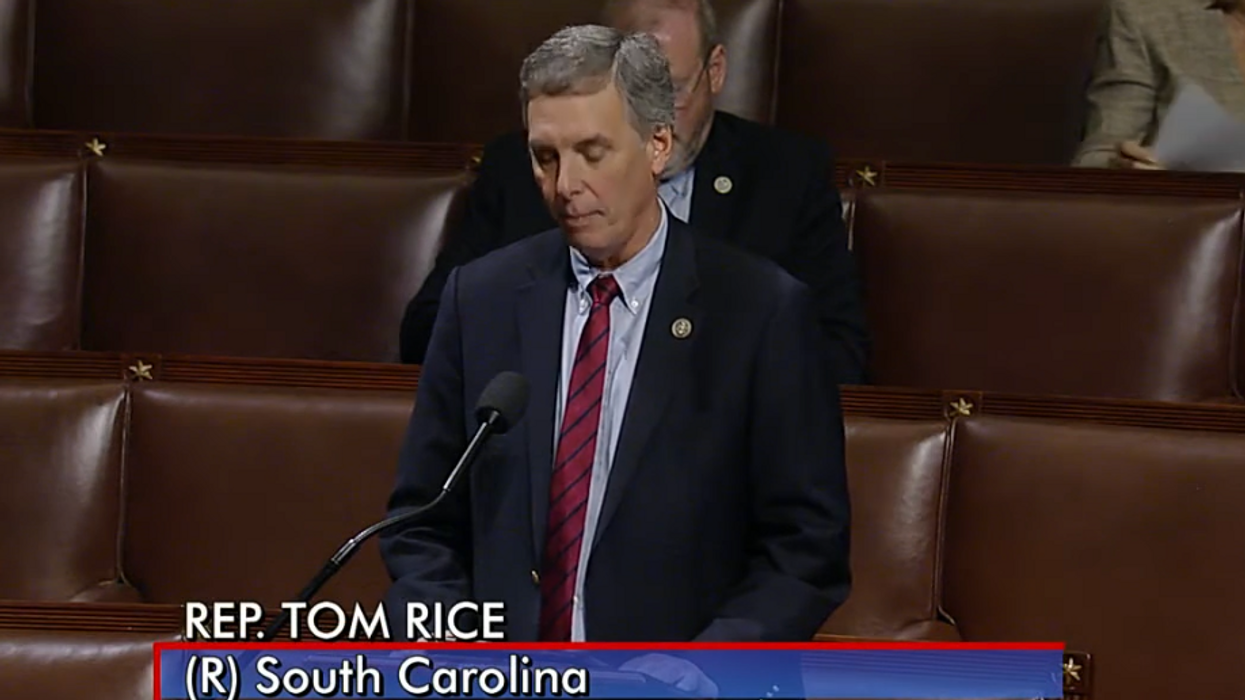 Although some Republicans in Congress have had the courage to condemn former President Donald Trump for the January 6 assault on the U.S. Capitol Building — including Rep. Liz Cheney of Wyoming, Sen. Mitt Romney of Utah and Rep. Adam Kinzinger of Illinois — many other Republicans are afraid to say one word against Dear Leader. Republicans in red states who stand up to Trump are likely to face an aggressive GOP primary challenge, and the political future of Rep. Tom Rice — who voted to impeach Trump following the January 6 attack — is the focus of an article by Washington Post reporter Marianna Sotomayor.

Rice is not known for being a Never Trumper. The South Carolina Republican was very pro-Trump in the past, but after the January 6 insurrection, he finally drew the line.

Sotomayor explains, "As a member of the House Ways and Means Committee, Rice helped draft what became the party's hallmark 2017 tax cut legislation. He supported building a wall along the U.S.-Mexico border. He supported Trump's tariffs on Chinese goods. He defended Trump during his first impeachment, saying, 'He has been the target of an astounding barrage of lies, deceit, and corruption.' And he objected to certifying the 2020 election results from Pennsylvania and Arizona that Trump falsely said were fraudulent. But on January 13, Rice shocked Washington and voters…. He voted to impeach Trump on charges he incited the deadly January 6 attack on the Capitol."

The South Carolina congressman, now 63, was first elected to the U.S. House of Representatives in 2012. After Trump lost to now-President Joe Biden in the 2020 presidential election, Rice promoted the Big Lie — and in December 2020, he signed an amicus brief in support of Texas v. Pennsylvania, Texas Attorney General Ken Paxton's appalling lawsuit that tried to throw out the democratic election results in Georgia, Michigan, Pennsylvania and Wisconsin.

But on January 6, Rice finally had an attack of conscience. And after he voted in favor of Trump's second impeachment, the South Carolina GOP voted to formally censure him. On top of that, Rice is facing GOP primary challenges in the 2022 election.

Rice jokingly added, "What do you call somebody who votes with Trump 99% of the time? A traitor."

One of the things that turned Rice against Trump on January 6, he told the Post, was a tweet attacking then-Vice President Mike Pence. Trump tweeted that Pence didn't have "the courage to do what should have been done to protect our Country and our Constitution."

The Post quotes Rice as saying, "To me, that is completely despicable…. For him to be calling Mike Pence a coward and him sitting at the White House surrounded by Secret Service and tweeting while Mike Pence is in the middle of all that, and he's a coward? Give me a break…. If the president, by force, can intimidate Congress into voting their way, then we might as well do away with Congress and hand it over to a king. What he did, in my mind, is what dictators do."