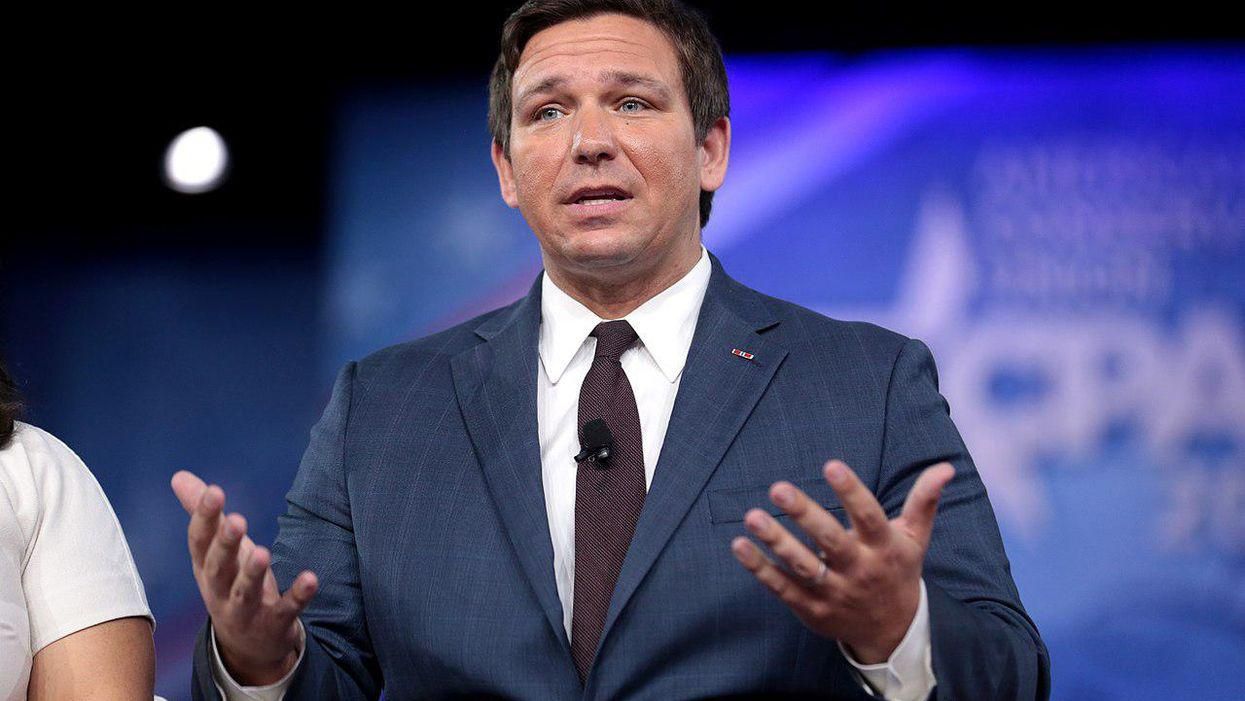 Last Sunday, a big red bus arrived at a church in Gainesville, Florida, offering a different kind of revival. The church parking lot turned into a social event and mini Covid-19 vaccination center, but the event's real purpose was summed up by the images of voting rights activists emblazoned across the side of the bus.

The Florida Rights Restoration Coalition is in it for the long haul.

"We believe in this movement to empower people," says Neil Volz, the deputy director of the FRRC, "and we know that there's going to be a long-term process at work."

Long-term is an understatement, based on the state's history up to this point. The voter suppression laws being passed in Republican-controlled states nationwide have become collectively known as Jim Crow 2.0. But in Florida, that label is a bit of a misnomer, as the original era of disenfranchisement led right into this second golden age of overtly racist anti-democratic policy.

In 1868, Florida passed a law that permanently banned anyone convicted of a felony in the state from voting. Even 150 years later, the law was still working just as intended: Black people make up about 17% of Florida's total population but nearly half of its prison population. In 2018, Black Floridians accounted for nearly a third of the 1.4 million permanently disenfranchised — nearly 20% of Florida's entire Black voting-age population.

The situation at times seemed intractable. A clemency board controlled by the governor had granted waivers here and there, and former Gov. Charlie Crist signed an executive order that simplified the process to re-obtaining the right to vote in 2007, but both of those avenues to re-enfranchisement were all but blocked off by Gov. Rick Scott when he took office in 2011.

After the 2016 election, the FRRC, the ACLU, and other activists decided to stop lobbying politicians and take matters into their own hands. Over the next two years, they collected petition signatures and campaigned statewide to pass Amendment 4, a ballot initiative intended to automatically restore the voting rights of over million returned citizens and end the same kind of disenfranchisement from happening going forward.

In 2018, both the gubernatorial and US Senate races in Florida went to recounts and were ultimately decided by less than a single percentage point. Amendment 4, on the other hand, received an overwhelming bipartisan show of support, passing with a whopping 64% of the vote.

It returned the right to vote to over one million Floridians. Sex offenders and murderers were left out, but anyone else, including people convicted of drug possession and an array of other nonsense felonies, such as "releasing helium-filled balloons in the air, catching a lobster whose tail is too short, disturbing turtle nesting eggs, and driving with a suspended license," as FRRC director Desmond Meade put it in 2020, were welcomed back into the democratic process.

It was a historic victory for civil rights — until it was gutted by newly elected Gov. Ron DeSantis, who squeaked into office after an unabashedly racist campaign, and the GOP-controlled legislature. He signed a bill in May 2019 that went against the entire spirit of the ballot amendment, requiring that returning citizens had to repay all fines and fees handed down to them by judges, even though those fines and fees rarely had anything to do with their actual sentence. The court system in Florida is financed by poor people who can't fight those penalties, leading to massive and capricious fines tacked on to sentences.

A legal battle ensued, but with 750,000 Floridians who were at risk of again losing their right to vote, the FRRC couldn't wait on the results of the courtroom drama. The group had shrewdly lobbied for a minor clause in the bill that allowed it to preserve at least some path to quicker voting rights restoration for returning citizens, which became the FRRC's focus in the meantime.

"There were provisions included in the bill that we requested that allow individuals with past convictions access to the courts, so that a court could modify the sentence so that somebody could vote," Volz explains. "So before the ink was even dry we started talking to judges and state attorneys and public defenders."

This is Chandrea. My colleague Sharon and I could not stop smiling and high-fiving today after Chandrea got her fin… https://t.co/BmmJx6S9dw
— Neil Volz (@Neil Volz) 1622324588.0

Republicans knew that navigating the Florida courts system was going to be an uphill battle, even with that clause. There are 67 different counties in the state, all of which run their own courts. In many cases, there is no way for an individual to easily find out how much they own in one county — some places didn't even keep track. The result was a lot of red tape — and an important revelation.

"We were trying to figure out how to operationalize this modification piece and in that process, it hit us that lots of people who have financial obligations, it's just $300 or $400," Volz says. "So toward mid-2019, we started to put a fund together, crowdsourcing to pay for it. It was just simply about removing barriers to voting for individuals. And we began distributing checks to people in late 2019, a whole year before a lot of other people would even hear about them."

Given the sheer chaos of 2020, the story went largely under-reported, even if we covered it incessantly in this newsletter last year (and raised over $13,000 for the FRRC). In June 2020, a federal judge largely eviscerated DeSantis's law, ruling that unrelated fines couldn't prevent voter registration and that any fees on indigent Floridians would be considered a poll tax. But again, the victory was fleeting. By September, the U.S. Court of Appeals for the 11th Circuit overruled that decision and reimposed the massive barrier, leading to a last-minute scramble to pay for and register as many people as possible.

"That was the ultimate catalyst for real growth in our funds and fees program, because we then were casting a vision out to anyone who would listen, saying 'hey, if all this division and all this partisanship and all this frustration has you down about the political system, there's actually a way for you to get involved that's positive and hopeful,'" Volz recalls. "You can actually donate to somebody the gift of democracy."

The surge included funds donated and raised by former New York City Mayor Michael Bloomberg, NBA superstar LeBron James, and grassroots donors across the country. By election day, the FRRC had taken in $27 million in donations from 80,000 people and went into overdrive to sort out peoples' financial obligations and get them registered before Florida's deadline.

But again, unwinding these fines is an intentionally arduous process, and given the late flurry of financial support, they made incredible progress but could still only so much get done before election day — especially after DeSantis and the Florida GOP insisted on an investigation into the financials, an ironic request considering the famously swampy, lawless campaign finance system in Florida. Earlier this month, the Florida Department of Law Enforcement ended the investigation with zero evidence of any wrongdoing.

DeSantis and the state GOP passed another law this month that further strangles the right to vote in Florida, with a disproportionate impact on people of color and low-income Floridians. That makes the FRRC's work even more important, which in turn renders the grassroots, bipartisan nature of the movement all the more crucial.

"There have been years of communication and now there are people who will come out and say we will walk with you through every step of the way and we won't sleep until all 1.4 million people with past convictions are empowered in the state," Volz says. "Our ability to reach into the returning citizen community is one isn't like any other organization trying to do it, because we are an organization led by and made up of people with past convictions. I'm a returning citizen, Desmond is a returning citizen. This is us talking to us, and you've got to have that kind of community aspect to it."

The FRRC has 20 chapters across the state of Florida that offer several different services — all free — to those looking to recover their right to vote. Lawyers are available to provide pro bono guidance to applicants who want to first try to negotiate a waiver or other adjustment to their penalty, an appeal to which some counties are much more amenable than others.

Volunteers otherwise help the currently ineligible navigate any given county's fines and fees system, which can make it difficult to even figure out how much someone owes; it becomes more complicated still when people owe fines to more than one county. The FRRC then helps the returning citizen pay off whatever they owe, which can be anywhere from a couple of hundred bucks to exponentially more. The wide range makes it hard to pinpoint any kind of typical case, but Volz says that it averages about $1000 per person.

The FRRC has thus far recovered the voting rights of more than 43,000 returning citizens while also providing other key services to an often-neglected community. The organization donated more than a million PPE to Florida prisons, distributing them to both inmates and guards who were left extremely vulnerable to the virus by the DeSantis administration. Stops on the bus tour also offered Covid tests and informational pamphlets to community members during the height of the pandemic, while the group has now transitioned to providing vaccines to those least likely to access them otherwise.

"When we help returning citizens and their families, the whole community benefits and that's part of the overall messaging that we are taking into every community," Volz explains. "If people are able to reintegrate into the community, there's less recidivism, which means there's less crime, and that's good for everybody."

And the more people who are integrated back into a strong community, the more likely they'll be to exercise their right to vote. The Florida Rights Restoration Coalition is nonpartisan, but right now, it's no secret that some politicians find it advantageous to use racist laws to disenfranchise citizens and maintain ill-gotten power.