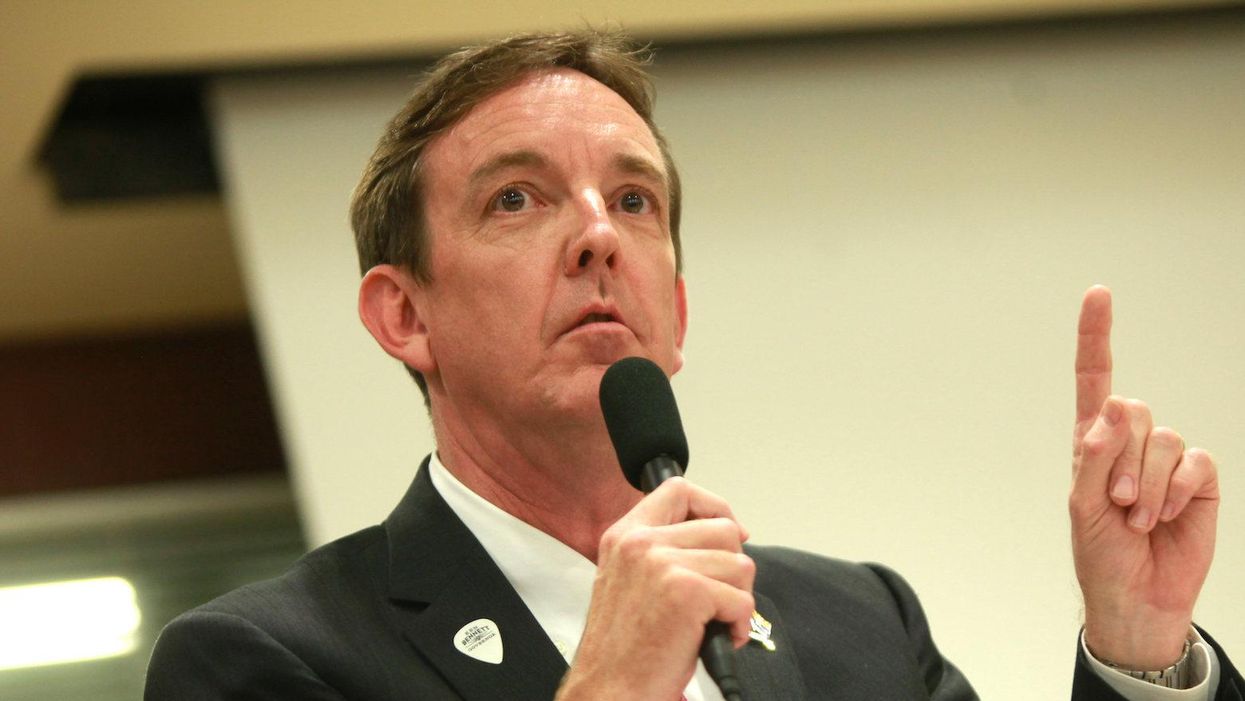 The same split that is dividing Republicans nationally, whether to embrace or reject the fiction that the 2020 presidential election was illegitimate, is now reverberating backstage at the Veterans Memorial Coliseum in Arizona, where pro-Trump contractors are leading a state-sponsored inquiry into the vote in Maricopa County, home to Phoenix and 60 percent of Arizona voters.

The state Senate's lead contractor, Florida-based Cyber Ninjas, whose CEO Doug Logan had said that Joe Biden's victory was illegitimate, has been opposing an effort to widen the Arizona Senate's inquiry—via another assessment that vets the 2020 vote more thoroughly. Logan also has sought to muzzle and even oust the lead proponent of that more detailed inquiry, former Arizona Secretary of State Ken Bennett, a Republican. Senate President Karen Fann asked Bennett to take the role of Senate audit liaison after she hired Cyber Ninjas. He is not taking any compensation for his role, unlike Cyber Ninjas and the subcontractors.

Beyond the personality clashes involved, which Voting Booth heard about while reporting from Phoenix as a hand count of 2.1 million paper ballots was nearing completion, is an emerging bottom line: Cyber Ninjas has spent several million dollars and two months conducting inquiries that are not poised to present sufficient analyses that can legitimately assess the presidential results.

Cyber Ninjas' inquiries, which include a hand count of all paper ballots and looking for forged ballots based on high-resolution and microscopic examination of the ballot paper and ink marks, are generating reams of information that could be cited in partisan propaganda—which is how pro-Trump media outlets have covered the audit from its inception.

Crucially, the data Cyber Ninjas is accumulating has not been compared to the building blocks of the state-certified vote count. At best, it is conducting a loosely constructed recount, which is not an audit—which is based on comparisons.

"There must be comparable results in sufficient detail, or else it is not an audit," said Larry Moore, the retired founder and CEO of Clear Ballot, a federally certified audit firm. "It is unacceptable to put out anything less."

Moore is not an unbiased observer in Phoenix. He has criticized the inquiries and is part of a team of seasoned election auditors that has parsed the same official records given to Cyber Ninjas after a Senate subpoena. The team's early analysis confirmed that Joe Biden won in Arizona and offered an explanation why. The official records revealed voting patterns showing that tens of thousands of voters supported most Republicans on their ballots—but did not vote for Trump.

Moore's team, which is locally led by Tucson's Benny White, who is a longtime Republican Party observer in state and local elections, has shared its findings with news organizations in Phoenix, whose coverage is beginning to reframe how the Senate's exercise should be evaluated.

The team has gone further in recent days. They challenged Cyber Ninjas to take their subtotals (gleaned from the official election data) and compare it to the subtotals in a sealed box of ballots. By June 11, there were several dozen boxes of ballots that had not yet been opened and hand-counted. Cyber Ninjas did not take up the challenge.

The auditors then gave their data to the press, including reporters who have observed Cyber Ninjas revising their procedures repeatedly in recent weeks. The evaluation pushed by Moore and White would directly compare the paper ballots marked by voters, the starting line, to the official election results, the finish line, to attest to the election's accuracy. Cyber Ninjas' process isn't making this comparison.

Growing Pressure Inside and Out

That fundamental procedural flaw, meanwhile, has bothered Bennett, the former Arizona secretary of state who says he volunteered to be Senate liaison because he felt that doubts about the election's legitimacy had to be put to rest. Since April, he has expressed interest in expanding the Senate's audit's inquiries to parse the electronic records that detect votes on the paper ballots and then compile the overall results.

Bennett has been pushing for a so-called ballot image audit to do this assessment, which would compare the digital images of every ballot created by vote-counting scanners to the electronically compiled vote totals. Bennett has attempted to hire a California nonprofit, Citizens Oversight, that happens to be run by a Democrat for that specialized assessment. But that prospect has been attacked in right-wing media and on social media, including by the audit's contractors led by Logan.

Inside the Phoenix arena, there are reports that Logan has told Bennett—who also is a former Arizona Senate president—not to talk to the press. Logan has reportedly bad-mouthed Bennett in closed meetings with pro-Trump activists and legislators visiting from out of state—who are seeking to bring similar privatized partisan assessments to their states (after Trump also lost there). It is clear, according to interviews by Voting Booth with witnesses to these incidents, that Logan's allies fear that more investigations would expose their shortcomings and undermine whatever report they issue.

Thus, among other things, pushing Bennett out of the inquiry would seem advantageous to pro-Trump Republicans' efforts to discredit the integrity of the 2020 election. In response, Bennett said that he is committed to examining Maricopa County's 2020 ballots and vote counts as thoroughly as possible, because he said that he is still a trusted messenger to enough Arizona Republicans who are awaiting his verdict.

"It's not what evidence is presented to most people, it's who it is presented to them by," Bennett said. He added that he wants to look at what Cyber Ninjas' analysis, the analysis by Moore and White, and what Citizens Oversight may do, and then present his judgment, and, if necessary, the details leading to his evaluation, to dispel any doubts.

"I believe that we can convince 90 percent of the people that are questioning the election [of its legitimacy], because it was the opposite party that was questioning the results in 2016. Ninety percent can understand that if Trump lost the election, it was Trump that lost the election," Bennett said. He mentioned several debunked conspiracy theories about the 2020 election in Arizona, saying, "It wasn't ballots flown in at midnight from China. It wasn't any fractional counting of votes on voting machines. It wasn't because Dominion [Voting Systems] was owned by China or Russia, or I don't know who… And similarly, when the Democrats lose, maybe it's because Hillary Clinton just wasn't what the American people wanted in 2016."