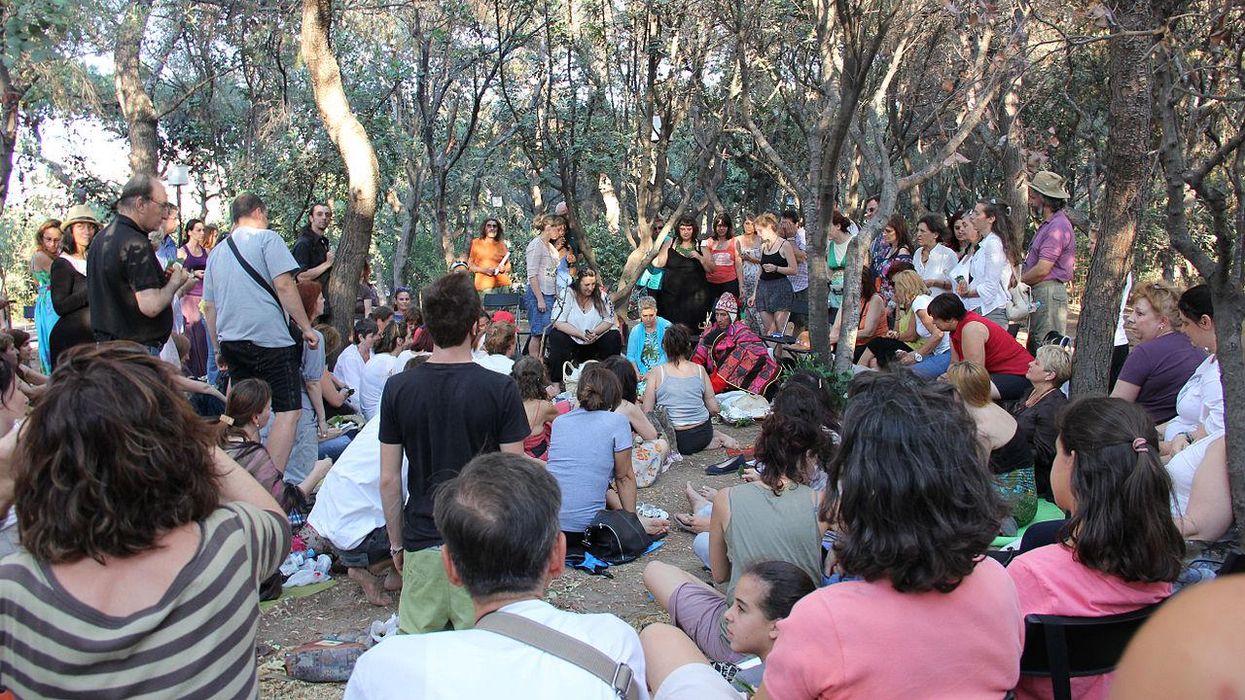 Reporter Laura J. Nelson, in an article published by the Los Angeles Times on June 23, takes a look at Californians who have an unlikely combination of beliefs: they are into new age ideology, but are also QAnon supporters.

"A world that has long embraced love, light and acceptance is now making room for something else: QAnon," Nelson reports. "More commonly associated with right-wing groups, the conspiracy theory is spreading through yoga, meditation and other wellness circles. Friends and colleagues have watched with alarm as Instagram influencers and their New Age peers — yogis, energy healers, sound bathers, crystal practitioners, psychics, quantum magicians — embraced QAnon's conspiratorial worldview and sprayed it across social media."

QAnon is a far-right movement that promotes bizarre and outlandish conspiracy theories. According to QAnon, the United States' federal government has been taken over by an international cabal of pedophiles, child sex traffickers, Satanists and cannibals — and former President Donald Trump was put in the White House to fight the cabal. Well-known pro-QAnon extremists in the Republican Party include Rep. Marjorie Taylor Greene of Georgia and Rep. Lauren Boebert of Colorado.

The fact that QAnon has made inroads with far-right Christian fundamentalist evangelicals isn't surprising; the Christian right has long been prone to conspiracy theorists. But the new age community in California seems an unlikely place for QAnon to make inroads.

Nelson, however, reports, "The health, wellness and spirituality world has always been primed for that worldview, followers say. Though largely filled with well-meaning people seeking spiritual or physical comfort, the $1.5-trillion industry can also be a hotbed for conspiracies, magical thinking, dietary supplements with dubious scientific claims and distrust of institutional healthcare, including vaccines."

Julian Walker, a Mar Vista yogi who hosts a podcast called "Conspirituality," told the Times, "It's always been the water we were swimming in. Now, we're seeing what happens when the water rises."

The violent insurrectionists who attacked the U.S. Capitol Building on January 6 included supporters of QAnon as well as members of the Proud Boys, the Oath Keepers and other far-right Trump supporters. And some of those QAnon supporters, Nelson points out, embrace new age beliefs.

Nelson explains, "Several New Age spiritualists in Southern California interviewed by the Times said they knew a total of more than a dozen former friends and colleagues at the January 6 insurrection at the U.S. Capitol with ties to yoga, meditation, energy healing and dietary supplements hawked by multilevel marketing companies. Jake Angeli, whose face paint and horned headgear during the Capitol riot earned him the nickname 'the QAnon Shaman,' carried a sign at earlier protests that read, 'Q Sent Me,' and successfully petitioned a federal judge on religious grounds to receive only organic food in jail. One of the best known of the rioters is Alan Hostetter, a ponytailed former police chief, yoga teacher and sound healer from Orange County who spoke at a QAnon conference and was indicted by federal officials this month."

Los Angeles-based yoga instructor Seane Corn, who co-founded the group Off the Mat, Into the World, has been warning others in the new age community that QAnon is dangerous.

"Corn was among the wellness leaders who shared a statement in September warning that QAnon's tactics resembled cult psychology and that the ideology would sow confusion, division and paranoia," Nelson reports. "Corn estimates she knows at least ten people who embraced 'hardcore QAnon,' including two people who participated in the attack on the Capitol — and is aware of more than 30 colleagues and peers who subscribe to some forms of the ideology, as well as a 'countless' number of yoga students. Corn said she has watched bots and real-life QAnon devotees try to harness her social media comment sections as a recruiting ground, using 'wellness language and nonviolent communication' in an attempt to lead her followers toward more conspiratorial thinking.