Pelosi sees four options for moving forward on Jan. 6 investigation. Only one makes any sense 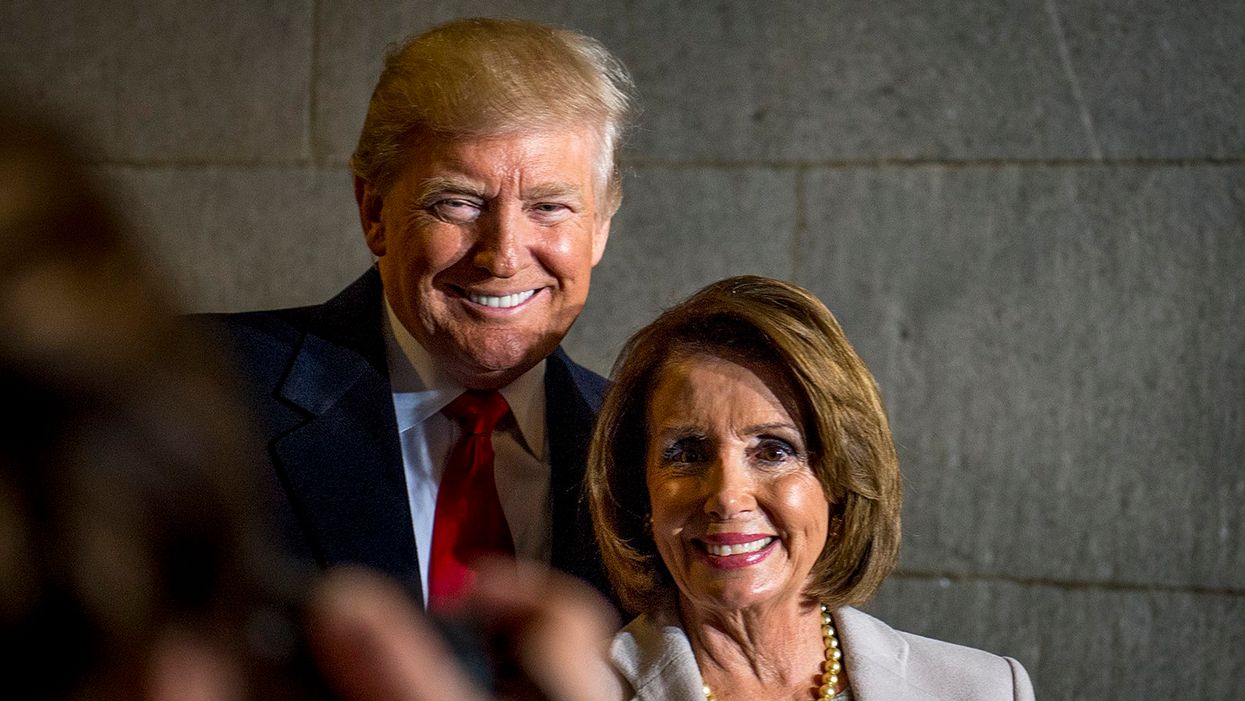 President-elect Donald J. Trump and U.S. Speaker of the House Nancy Pelosi smile for a photo during the 58th Presidential Inauguration in Washington, D.C., Jan. 20, 2017. More than 5,000 military members from across all branches of the armed forces of the United States, including reserve and National Guard components, provided ceremonial support and Defense Support of Civil Authorities during the inaugural period. (DoD photo by U.S. Air Force Staff Sgt. Marianique Santos)
Joan McCarter
and
Daily Kos
June 02, 2021

House Speaker Nancy Pelosi and House Democrats held a conference call Tuesday to discuss a path forward for an investigation of the Jan. 6 attack on the U.S. Capitol, after Senate Republicans filibustered legislation creating an outside, bipartisan commission. She offered four options, only one of which is likely to be effective: push for another Senate vote on commission; create a select committee; allow existing committees to probe Jan. 6; or make one committee, likely the Homeland Security Committee, responsible for conducting the investigation.

The first choice, which apparently she believes is actually real, is folly as long as the Senate clings to the filibuster. At most, there are 57 votes for a bipartisan commission. There were 54 on Friday. Democratic Sens. Patty Murray and Kyrsten Sinema were absent, as were nine Republicans. Among them, only Sen. Pat Toomey indicated potential support for the commission. That's 57 votes, a compelling enough number for some filibuster-reforming advocate in the Democratic conference to push the issue, but it's not clear there's any hope of success there. Mitch McConnell wants to cover up Republican complicity in Jan. 6, and he's going to ferociously fight an investigation.

Having the standing committees conduct the investigation along with their regular course of business likewise seems ineffective. They have stuff to do. Republican members of those committees already make life hell for their Democratic counterparts on committees, and adding this investigation to the regular business of them would likely grind everything they're needing to accomplish to a halt. So either option of sending it to the regular committees seems unworkable.

The only real choice among them is the select committee. It has pitfalls, as do all of the options, but handled properly is a better option than what had been settled on—in negotiations with the very Republicans who have opposed it—in the bipartisan commission. The structure that House lawmakers had settled on for that commission were problematic in that it gave McConnell and House Republican leader Kevin McCarthy too many opportunities for sabotage. They could have made their half of the commission rabid Trumpers if they wanted. Their pick for vice chair would have had power to veto subpoenas. The commission had a Dec. 31, 2021 deadline—a far too truncated scope of time. All of which are more reasons why it's ridiculous of Pelosi to even consider trying to push it through the Senate again, especially given how much more time would be eaten away in that process.

From just a time standpoint, the select committee is the best option, and the sooner the better. While she would have to give McCarthy the ability to appoint Republicans to serve on it, there's nothing compelling her to give Republicans more than a few seats. The rules for select committees don't dictate how many members of each party serve. Pelosi can create the committee with a simple majority vote, and she could move quickly to do it. That committee can be granted subpoena powers just like all the standing committees. Though House subpoenas aren't as enforceable as Department of Justice subpoenas, the committee would have them. Likewise, the House could set a more reasonable deadline for the committee's work, giving it more than six months to complete it. It could stand through the remainder of this session of Congress, through 2022.

One very good thing about the select committee, even if subpoenas aren't as powerful in Congress, is that it has special privileges to access documents from the Trump administration that are at the National Archives, including White House documents. Trump doesn't have control over those documents, the National Archives do. While they are officially under seal for several years, Congress has the power to break the seal. We don't know what records the White House has for what was going on that day—or in the days preceding it—but whatever records there are would be pretty easily accessible to the House, and would require Trump to sue to prevent their release.

Like every option, the select committee will be subject to screams of "partisan" from McConnell and crew. That's going to happen no matter what—there is no option that will avoid it. Even the bipartisan commission that was engineered to give Republicans maximum input was declared partisan. McConnell called it "a purely political exercise that adds nothing to the sum total of information."

McConnell and McCarthy don't want the nation to learn exactly how Jan. 6 happened. They don't want their complicity in the Big Lie and the violence that Trump fomented with it—and is still trying to foment with it—to be exposed. It's that simple. Worrying about what Republicans are going say about any investigation is pointless. Countering what Republicans say with the hard facts of what they allowed to happen on Jan. 6 is everything.

A select committee is, at this point, probably the fastest way to get started. And urgency is the point here. It's too late to nip the Big Lie in the bud and too late to prevent many Republican states from enacting egregious voter suppression laws using the excuse of the Big Lie. But that makes it even more critical that the work exposing what happened to our democracy start now.