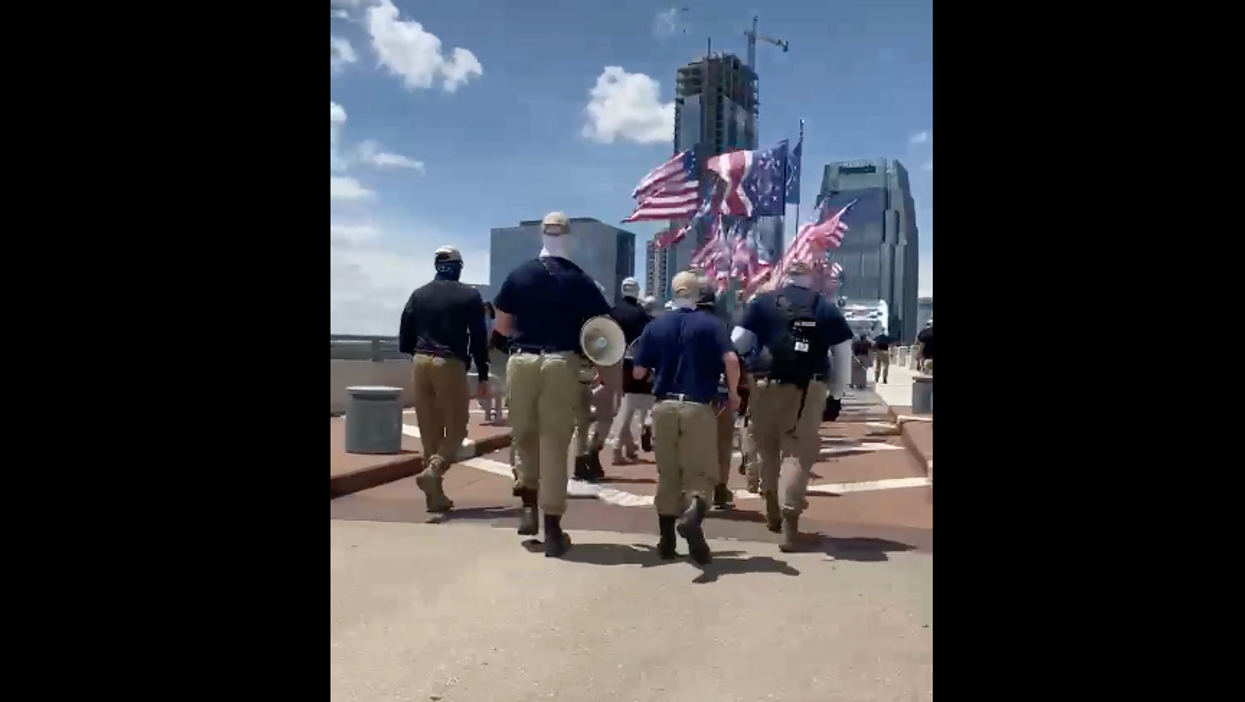 Unapologetically fascist organizations like Patriot Front always pose something of a dilemma: they are numerically small but intense, and rely on highly public stunts as a way of attracting attention and, they believe, recruits to their cause. In some regards, it makes sense to ignore them as much as possible and deny them the oxygen they crave.

But at times, the stunts they pull demand a response, such as when they brazenly marched in Washington, D.C., with police escorts in both February 2020 and January 2021. That's been especially the case the past month, as Patriot Front extremists have been busily defacing monuments to African Americans, particularly memorials to George Floyd in Brooklyn and Philadelphia, as well as a bust of a Black explorer with the Lewis and Clark Expedition in Portland, Oregon.

Patriot Front, the brainchild of a young Texas neo-Nazi named Thomas Rousseau, explicitly embraces fascism in its writings and recruitment material ("Fascism: The Next Step for America" reads one of its fliers). Its primary strategy is to perform attention-grabbing stunts—plastering their hateful stickers around communities and campuses, waving white-nationalist banners from freeways, harassing leftist protest groups, and occasionally organizing marches intended to create the impression that their numbers are larger than they are in reality—that force the media to cover them, which they believe will eventually draw more recruits their way.

Many of these tactics have grown ineffective over time, including the freeway banners and fliers, which increasingly draw little media attention. As a result, Patriot Front increasingly appears to be engaging in more brazen attacks on leftists, particularly by vandalizing monuments.

The first such attack occurred earlier this month in Philadelphia, when vandals sprayed white paint covering a mural dedicated to George Floyd in the Olney section of the city. They then spray-painted stencils featuring Patriot Front logos and slogans over the white paint.

The mural had been commissioned by the North 5th Street Revitalization Project in summer 2020 in the wake of Floyd's murder by former Minneapolis police officer Derek Chauvin on May 25.

The Philadelphia Police Department said the vandalism was under investigation.

The Brooklyn defacement was even more brazen. Dedicated on Juneteenth at Flatbush Junction near Brooklyn College, someone early Thursday morning threw black paint onto the bust of Floyd, and then stenciled graffiti featuring Patriot Front's online URL onto its base.

Security cameras caught images of four men with bandanas covering their faces walking toward the memorial early Thursday morning. One of the men appeared to be shaking a can of spray paint. Another image caught the license plate number of the vehicle that appeared to have brought the men to that location. New York police said they were investigating the incident as a hate crime.

"It's at the epitome of not only anti-Blackness and racism, but it is also about the lack of even basic human decency about the life of George Floyd," Imani Henry, an organizer with Equality for Flatbush, told the New York Times. "For someone to desecrate an innocent person's tribute is just beyond the pale," Henry said.

"Patriot Front is explicit in its exclusion of people of color from its conception of pan-European identity as the authentic America," Susan Corke, the head of SPLC's Intelligence Project, told HuffPost's Christopher Mathias in a statement. "And their method of operation is to stage offensive racist propaganda stunts. Thus this abhorrent, hateful defacement of the George Floyd statue is more of the same garbage."

The incident in Portland involved a rogue memorial to York, the African American explorer who accompanied the Lewis and Clark Expedition west to Oregon in 1803 as Clark's slave and is believed to have been the first Black man to have reached the Pacific Ocean. In February, a bust of York—composed of wood and liquid urethane but simulating the appearance of a bronze—was placed atop a pedestal in Portland's Mount Taber park that formerly had featured a statue of onetime Oregonian editor Harvey Scott, which had been pulled down during an anti-police protest in October 2020.

The bust's artist is unknown, and city officials have discussed replacing it, perhaps with a more durable version of the same memorial. It was attacked and vandalized earlier this month by a woman who was recorded spraying paint on its base; 43-year-old Jeanette Grode was subsequently charged with criminal mischief for the act.

But Sunday morning's vandalism—white paint once again sprayed over parts of the bust and the pedestal, with a stenciled logo painted in red over the plaque marking the bust's commemoration—was clearly the work, once again, of someone affiliated with Patriot Front.

These acts serve as ongoing reminders of the limitations of the strategy of denying attention to hate groups seeking it: Almost inevitably, their hateful rhetoric generates real-world criminality and violence directed at vulnerable minority communities that cannot be ignored. And their small numbers, in the end, are often inconsequential: It only takes one or two of these violent extremists to wreak a great deal of havoc on the public.

Patriot Front in particular has been gearing up for the post-Trump era, counting on a strategy of "red-pilling" people already radicalized online by militias and the "Boogaloo" movement into extreme neo-Nazi beliefs. Yet they mostly view rival far-right groups with contempt.

"Proud Boys are a bunch of cucks," wrote one Patriot Front member from Texas. "They call themselves 'Western Chauvinists' which means they are a bunch of liberals who don't like PC culture and 'snowflakes' yet they are too scared to actually stand up to these things in a meaningful way lest they be called RACISTS!!!!"

One Patriot Front member, Bryan Betancur of Silver Spring, Maryland, currently faces charges for participating in the Jan. 6 insurrection at the U.S. Capitol. Betancur, who voiced support for the man who murdered Heather Heyer in Charlottesville in August 2017, actually wore an ankle bracelet as part of his probation for a burglary conviction, and the evidence against him includes data from that bracelet. A hearing on Betancur's status today in federal court noted that discovery was still under way in the case.