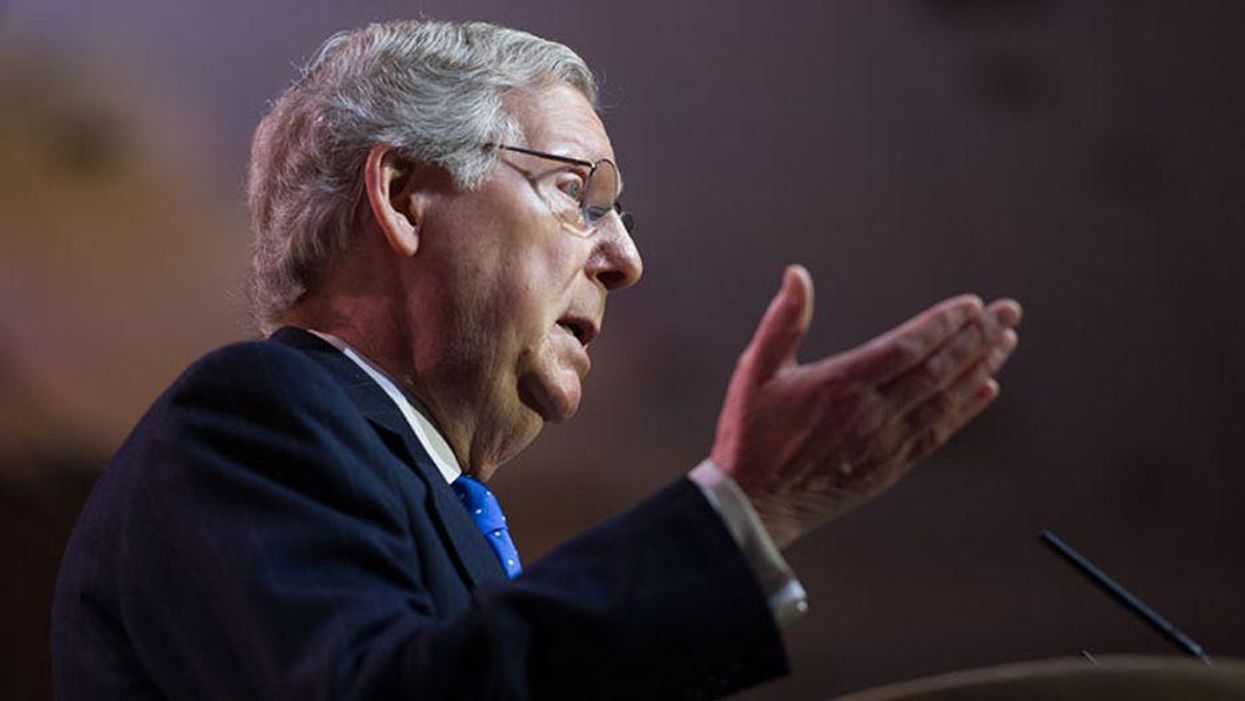 Republican Senate Minority Leader Mitch McConnell is actively working to undermine the Democratic majority's emerging infrastructure strategy by demanding the separation of the White House-backed bipartisan deal from a broader reconciliation package—a non-starter for progressives who say they will not support the former without simultaneous passage of the latter.

"It's not going to happen," Rep. Ro Khanna (D-Calif.) told NBC News on Monday, referring to McConnell's request. "There is no way a bipartisan deal passes the House without a vote the same day on a Senate-passed reconciliation that has bold climate provisions."

In a statement on Monday, McConnell called on Senate Majority Leader Chuck Schumer (D-N.Y.) and House Speaker Nancy Pelosi (D-Calif.) to "walk back their threats that they will refuse to send the president a bipartisan infrastructure bill unless they also separately pass" a sweeping reconciliation package, which the Kentucky Republican referred to as "unrelated tax hikes, wasteful spending, and Green New Deal socialism."

Along with other members of his caucus, McConnell—despite being well aware of Democrats' two-track approach—voiced outrage last week after President Joe Biden said he would refuse to sign a bipartisan infrastructure bill that is not accompanied by separate legislation that addresses other Democratic priorities, from investments in green energy to child care to paid family leave. The Democratic package would pass through reconciliation, an arcane budget process that is exempt from the 60-vote legislative filibuster that McConnell has frequently wielded to stymie the majority party's agenda.

Biden soon softened his position amid Republican backlash, saying in a statement Saturday that he intends to "pursue the passage" of the $579 billion bipartisan measure "with vigor" and will sign it if it reaches his desk.

But Biden's shift was not enough for McConnell, who said the president's vow will amount to a "hollow gesture" unless Schumer and Pelosi take the same position.

On Thursday, Pelosi said the House won't hold a vote on a bipartisan infrastructure bill until the Senate also passes the broader reconciliation package—a stance that won applause from progressive lawmakers, who are now urging the Democratic leadership to hold firm in the face of what they view as McConnell's bad-faith sabotage effort.

Rep. Pramila Jayapal (D-Wash.), chair of the Congressional Progressive Caucus, pointed to McConnell's remark last month that "100%" of his focus is on "stopping this new administration."

"The last person who should have a say on our agenda is Senate MINORITY Leader Mitch McConnell," Jayapal tweeted. "We're going to go big and bold on our reconciliation package because that's what people voted us in to do."

Democrats on the Senate Budget Committee—which is headed by Sen. Bernie Sanders (I-Vt.)—are expected to hold a call this week to discuss the size and scope of the nascent reconciliation bill.

Sanders is reportedly pushing for a roughly $6 trillion package that includes Medicare expansion, significant spending on climate action, and other investments. The youth-led Sunrise Movement is demanding that Democrats to go even further by embracing a $10 trillion in climate and infrastructure spending over the next decade.

But, in order to pass, any reconciliation bill must win the vote of Sen. Joe Manchin (D-W.Va.), who indicated over the weekend that he would not be willing to support a package larger than $2 trillion.

In a tweet on Monday, Sanders addressed those suggesting his reconciliation offer is too pricey.

"For those who say the budget framework I proposed costs 'too much,' what would you cut?" the Vermont senator asked. "Combating climate change? Childcare? Universal Pre-K? Paid family and medical leave? Dental, hearing, and vision [for Medicare recipients]? Housing? Long-term home healthcare? Child Tax Credit? Waiting..."