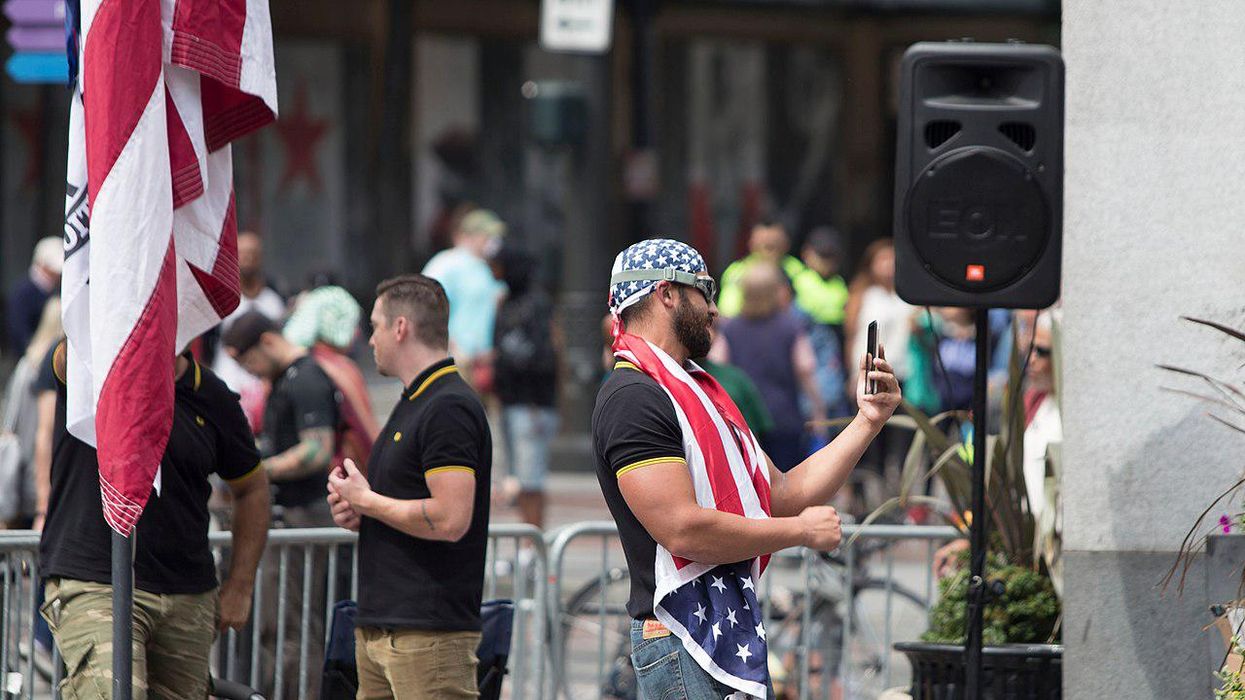 Members of Patriot Prayer and the Proud Boys at a rally in Seattle in 2017, Wikimedia Commons
Alex Henderson
June 03, 2021

On December 21, 2020, far-right extremists — including members of the group Patriot Prayer — breached security when they entered the Oregon State Capitol Building in Salem in order to voice their opposition to COVID-19 restrictions in the Pacific Northwest state. And according to an investigative report released on Wednesday, June 2, Oregon State Sen. Mike Nearman "more likely than not" helped them get into the building, which was closed to the public and locked.

The seven-page report was authored by Melissa Healy, a private attorney, and it came about as a result of complaints against Nearman — a far-right Republican from Polk County. The report reads, "The evidence supports a conclusion that it is more likely than not that Rep. Nearman intentionally aided demonstrators in breaching Capitol security and entering the building on December 21, 2020, when it was closed to the public."

Although Oregon is a deep blue state — the last Republican to carry Oregon in a presidential election was Ronald Reagan in 1984 — it isn't without its far-right wingnuts and extremists. And the militant Patriot Prayer, which violently clashed with antifa supporters during the George Floyd protests in Portland in 2020, has been bitterly opposed to COVID-19 restrictions and social distancing measures enacted in Oregon in response to the pandemic. Patriot Prayer are allies of the Proud Boys — another group with a history of violence — and were strong supporters of former President Donald Trump during the 2020 election.

Democrats in the Oregon State Legislature believe that Nearman endangered their safety by helping members of Patriot Prayer and other groups get into the Oregon Capitol Building on December 21, 2020. Some of the demonstrators, according to the report Healy authored, were armed.

Dirk VanderHart, a reporter for Oregon Public Broadcasting, explains, "As lawmakers met in a special legislative session to take up COVID-19 relief that day, surveillance footage showed Nearman exiting the locked Capitol Building into a throng of protesters who were trying to get inside the statehouse. In doing so, he appeared to purposely grant entrance to far-right groups demanding an end to ongoing restrictions related to COVID-19."

According to VanderHart, "Shortly after that breach, demonstrators scuffled with state troopers and Salem police. One man is accused of spraying officers with bear mace, allowing the crowd to make its way further into the building. Several people were arrested before the Capitol was cleared, and members of the crowd went on to shatter glass doors and assault journalists outside the building. Nearman, meanwhile, promptly walked around the building and entered on the opposite side less than six minutes after he exited, the report says."

The assault on the U.S. Capitol Building on January 6 made Democratic state lawmakers in Oregon even more troubled by the events of December 21, 2020.

Is white supremacy a rising problem in the U.S.?