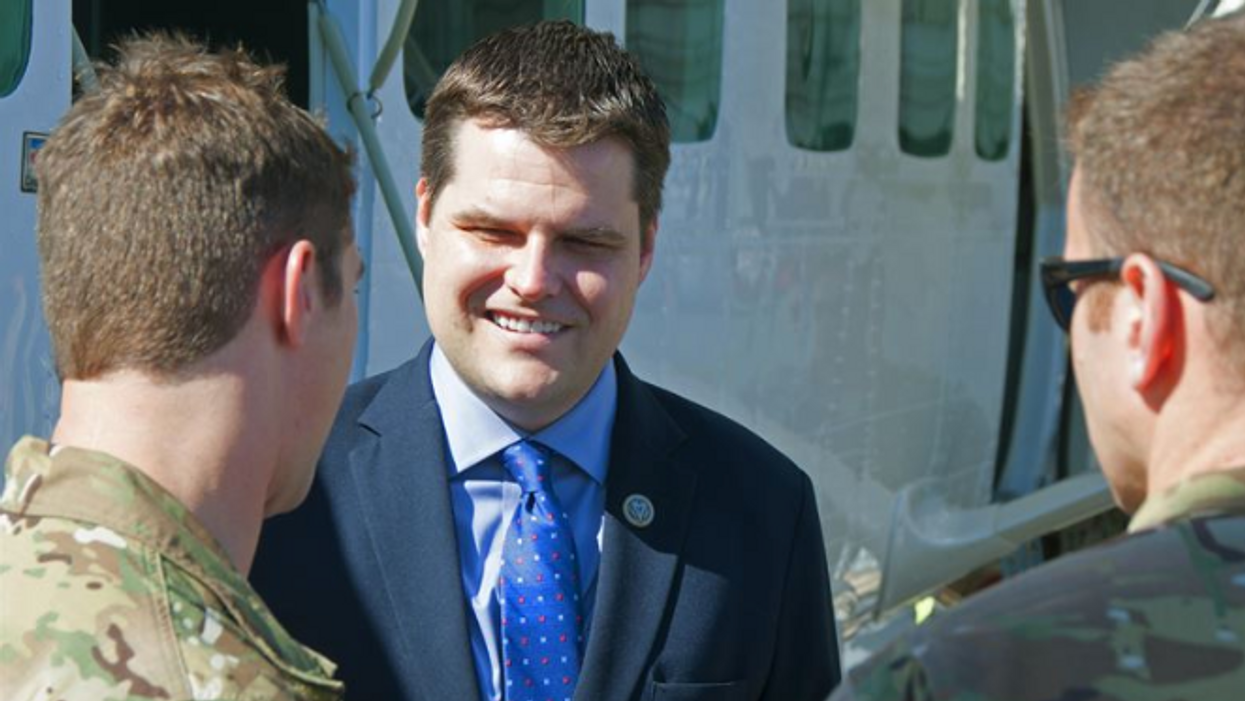 In interviews with Business Insider, former classmates of Rep. Matt Gaetz (R -FL) when he was attending William & Mary Law School, expressed dismay at continuing reports of his sex scandals and want him to resign immediately.

Along the way, they recalled his hard-partying ways when they were in school with him, with one adding of his recent exploits that have him under federal investigation, "Am I surprised he's partying with people or doing that kind of stuff? No."

According to the report, "In interviews, many of Gaetz's former friends and acquaintances from William & Mary Law School's class of 2007 said they were embarrassed by the constant headlines about the GOP congressman's scandals. Insider spoke with 14 of Gaetz's former classmates. Most of them spoke on condition of anonymity to protect personal and professional relationships," with Insider adding, "One former law-school classmate regularly trolls Gaetz on Twitter by welcoming the congressman's critics to the 'Matt Haetz Society.'"

Insider reports that "Of the more than 500 William & Mary Law School alumni who signed a petition urging Gaetz to resign, 34 of them were members of Gaetz's own class of 2007, of which there were about 200 people overall."

One former classmate admitted that they dread each report on the lawmaker.

"Every time The Daily Beast breaks another story on a Friday, it's like, 'Oh boy, go check Twitter,'" they stated.

During the interviews, emails from Gaetz's college days were shared with one being an invitation to a Super Bowl party that also promised gambling and strippers -- which one associate of the now-Florida lawmaker said was a joke.

"His invitation included specific requests: chips, one-dollar bills, and strippers," Insider reports while quoting Gaetz writing, "I may ask you to bring some incidentals (napkins, cups, chips, strippers, ext.).P.S - After entering all of your email addresses it is painfully obvious that I don't know enough girls - so bring some."

According to the schoolmate who said they weren't surprised by the lawmaker's current partying, they admitted they were stunned that he might have had sex with underaged women, telling insider Gaetz "... has a very high sense of self-preservation. I'm surprised he wouldn't check their references."

"Gaetz's law-school reputation — attention-seeking with a frat-boy vibe — is similar to how he comes across as a congressman, said a former classmate, 'except he's more over-the-top now,'" the report notes. "As a law student, Gaetz lived in a large multi-bedroom house near campus, more luxurious digs than the cramped apartments where some of his classmates lived. He often hosted friends there to play cards or drink from a keg in the basement."

"There are a handful of students that stood out as being particularly intelligent, others as particularly aggressive — we call them 'gunners,'" explained a former classmate before adding Gaetz "wasn't either of those. He's always been kind of a frat boy."

With one former classmate calling Gaetz "embarrassing to the institution," another said of his attempt to throw out the election results that led to Donald Trump's loss, "In doing that he's undermining our system of government and the rule of law. Obviously, it's not great to have Matt be among our alumni. It's not really the person you want to point to as a role model."