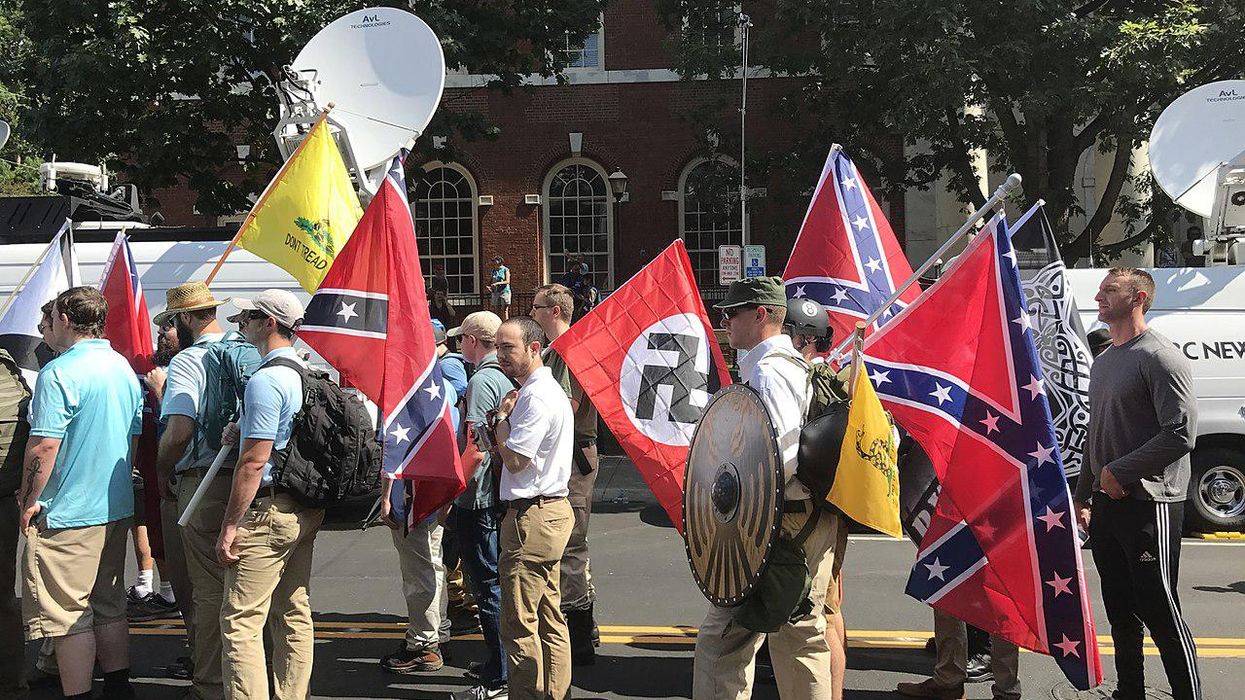 Involvement in white supremacist and white nationalist terrorist groups is especially dangerous when someone has been enlisted in the U.S. military, as that person has been trained in the use of weapons. An article by reporter Chris Joyner, published by the Atlanta Journal Constitution on June 26, takes a look at a former U.S. Marine and sheriff's deputy from Wilkinson County, Georgia who was, according to the FBI, plotting racist terrorist attacks.

"When FBI agents in San Diego seized the cell phone of a suspected white supremacist last year," Joyner reports, "they discovered text messages with a Georgia sheriff's deputy boasting of racial violence and preparations for a civil war. The text message chain, called 'Shadow Moses, between San Diego plumber Grey Zamudio, 33, and 28-year-old Cody Griggers, a former Marine and sheriff's deputy in Wilkinson County, revealed plans to steal explosives, dry runs with illegal silencers and boasts of racial violence. In one text, Griggers said he hoped law enforcement and the military would join their side in the coming conflict."

Griggers and Zamudio, Joyner notes, have both pled guilty to federal weapons charges. Both of them are due to be sentenced this summer — first Zamudio in July, then Griggers in August.

Joyner reports, "Griggers, who was a military policeman stationed in San Diego until his honorable discharge in 2017, said he wished he could 'go ahead and fast-forward so I can enjoy the suffering of the abortion that is the American population.'"

Joyner notes that "rooting out extremism within the military" is a high priority for Gen. Lloyd Austin, secretary of defense in the Biden Administration — and Joyner points out out that "Griggers' involvement shines a light on the growing concern inside the intelligence community about the far-right radicalization of service members and law enforcement officers." And Joyner also observes that according to a recent study by the Program on Extremism at George Washington University, 12% of the more than 450 people arrested in connection with the January 6 assault on the U.S. Capitol Building were current or former members of the United States' armed services.

The Griggers/Zamudio alliance underscores the type of threat that violent white supremacists and white nationalists pose in the United States in 2021. Griggers bragged that he could obtain weapons such as flashbang grenades, and Zamudio told his ally, "I'm ready to terrorize L.A."

Joyner explains, "In one exchange, Griggers wrote about getting police equipment and explosives in preparation for what he expected would be the racial and political violence to come. Other law enforcement officers could be brought to his side or attacked for 'siding with the enemy'…. The FBI said Griggers spoke approvingly of the Holocaust, and when they raided Zamudio's home, they found an anti-Semitic and racist novel well known among the radical right for its depiction of an apocalyptic race war. Griggers indulged in such fantasies where the assassination of 'famous liberals'' could be blamed on Muslims."

Griggers told Zamudio, "I'm either positioned to maximize damage by attacking from the inside or coordinate efforts to safely identify ourselves as patriots in order to maximize weapons pointed towards the enemy and minimize friendly fire."

According to Joyner, "In his texts, Griggers boasted of using his law enforcement position to carry out attacks. In one exchange in August 2019, he described an alleged beating of a Black suspect as 'sweet stress relief' and claimed he planned to charge other Black people with felonies to keep them from voting."