'Which side are you on?': Protesters call on Biden to stop Line 3 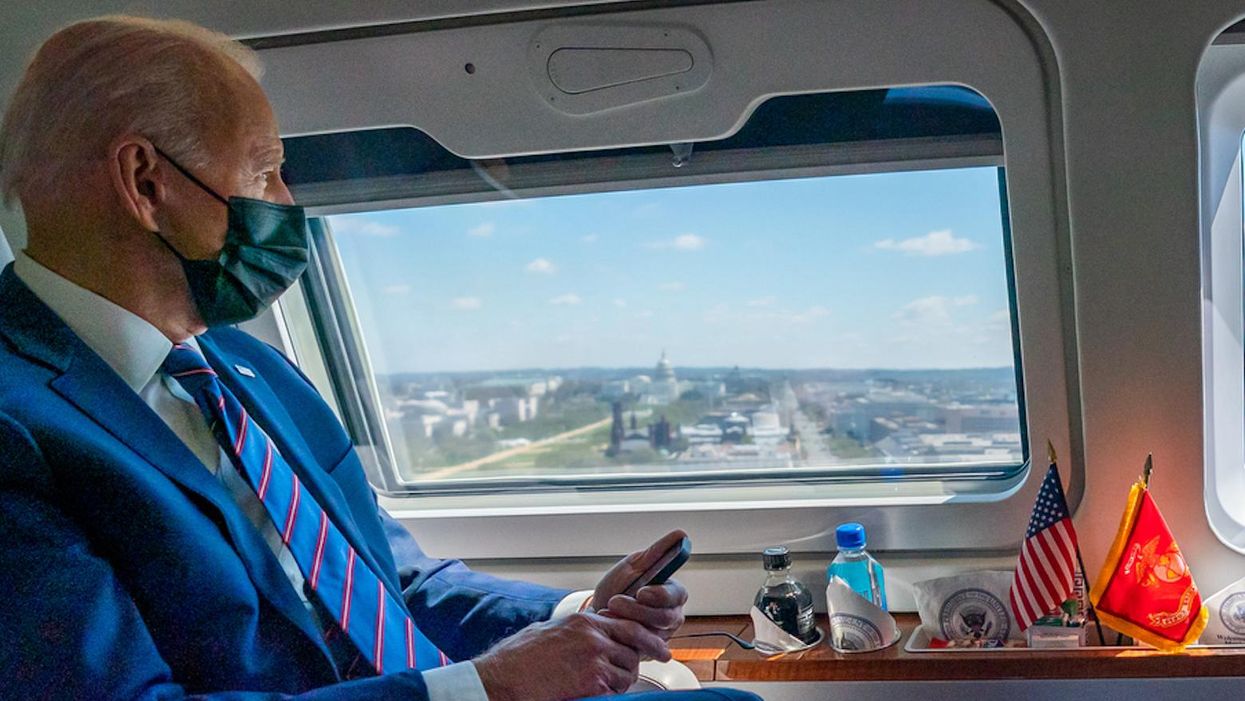 President Joe Biden and First Lady Jill Biden look out the windows of Marine One at they fly over the National Mall in Washington, D.C. on Friday, April 2, 2021, en route to Camp David, near Thurmont, Maryland. (Official White House Photo by Adam Schultz)
Brett Wilkins
and
Common Dreams
June 08, 2021

In what organizers are calling the largest-ever demonstration of its kind in Minnesota history, more than 2,000 Indigenous-led water protectors on Monday continued nonviolent, direct action protests against the planned replacement and expansion of Enbridge's Line 3 tar sands pipeline.

Stop Line 3 campaigners said over 1,000 water protectors marched with Indigenous leaders to the headwaters of the Mississippi River on the third day of the Treaty People Gathering—which organizers billed as "the beginning of a summer of resistance"—to participate in a treaty ceremony at a proposed Line 3 crossing site.

The $9 billion pipeline project—which if completed will carry up to 750,000 barrels of crude tar sands oil, the world's dirtiest fuel, from Alberta to the port of Superior, Wisconsin—is slated to traverse Anishinaabe treaty land without tribal consent. The proposed pipeline route crosses more than 200 bodies of water and 800 wetlands, raising serious concerns not only about the project's impact on the climate emergency, but also about leaks and other accidents opponents say are all but inevitable.

South of the Mississippi headwaters gathering, over 500 activists in coordination and solidarity with the Indigenous women and two-spirit-led Giniw Collective shut down a Line 3 pumping station at Two Inlets, northwest of Park Rapids, with some demonstrators locking themselves to construction equipment.

A low-flying helicopter protesters said belongs to the U.S. Department of Homeland Security kicked up a large dust cloud in an apparent effort to intimidate and disperse activists from the pump station protest site. Water protectors continued their resistance even as police clad in riot gear arrived at the station and reportedly began arresting demonstrators later in the afternoon.

Up the road off highway 71 activists have blocked the road to the pump site with a boat. Minimal state patrol prese… https://t.co/IJcQKY2ChM
— Evan Frost (@Evan Frost) 1623088280.0

Treaty People Gathering participants are calling on President Joe Biden to cancel Line 3 like he rescinded the federal permit for the Keystone XL pipeline on his first day of office following years of grassroots organizing and pressure by opponents. However, Biden has disappointed activists by refusing to shut down the Dakota Access Pipeline (DAPL), another highly controversial project that was the site of massive resistance and brutal repression in 2016.

The New York Times reports some tribal leaders are hoping that Interior Secretary Deb Haaland, a pipeline opponent and the first Native American Cabinet secretary in U.S. history, will influence Biden's Line 3 decision. Haaland, who was chair of the New Mexico Democratic Party at the time, participated in the #NoDAPL protests at Standing Rock.

Indigenous leaders stressed their ancient connection to the land and water that they say are imperiled by the pipeline.

"Our ancestors made agreements to take care of this water and land forever together, and now is our time to do that," protester Winona LaDuke, a two-time vice presidential candidate on Ralph Nader's Green Party ticket and co-founder and executive director of the Indigenous environmental advocacy group Honor the Earth, said in a statement.

Giniw Collective co-founder Tara Houska said in a statement that, "Our Mother is calling out, and it's time for us to listen or do the work to remember how."

"It's also time for us to all stand with our words," added Houska. "The situation is urgent, it requires urgent response. Find your bravery, find your community, find your truth. Stand with us and Stop Line 3."

"For years we have tried to assert our sovereignty and speak out against Line 3," said Goodwin, co-founder of the RISE Coalition. "We still have time to save our sacred waters and land—our life sources."

Motioning toward the crowd of pumping station protesters, Fonda told the Associated Press that "this is important; this is what we need," as she held up a sign with Biden's image reading, "Which side are you on?"

"Your unprecedented goals for climate action, for federal respect of tribal sovereignty, for environmental justice, and for science all demand you revoke or amend the Line 3 presidential permit," the letters' signatories asserted.

According to the Associated Press, the Minnesota Court of Appeals is expected to rule by June 21 whether Enbridge has proved the long-term necessity of the Line 3 project. With the climate emergency in mind, Houska told the Times that she recently told White House climate adviser Gina McCarthy that "you can't cancel Keystone XL and then build an almost identical tar sands pipeline."

Underscoring what climate campaigners and United Nations Secretary-General António Guterres have called the "suicidal" nature of fossil fuel expansion, scientists working at the National Oceanic and Atmospheric Administration's Mauna Loa Atmospheric Baseline Observatory in Hawaii reported Monday that atmospheric carbon dioxide reached a monthly average level of 419 parts per million in May, which is not only the maximum reading ever recorded but also the highest concentration the planet has experienced in over four million years.

'I didn’t take an oath to defend Trump': This conservative South Carolina Republican is now branded a 'traitor'