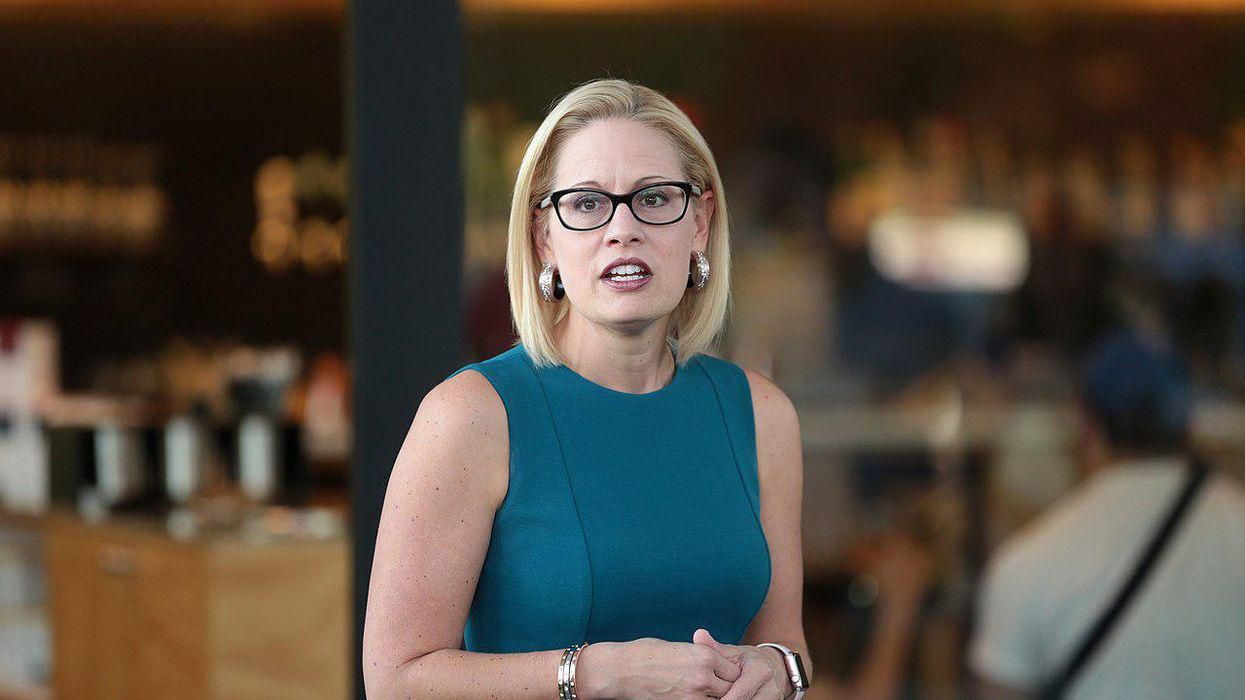 Republicans are doing all they can to block a historic voter rights bill. Called the For the People Act, the bill aims to not only set up automatic voter registration but expand early voting, ensure more transparency in political donations, and limit partisan drawing of congressional districts. Republicans are blocking the legislation under the guise that it will increase electoral fraud. Similar claims were made by former President Donald Trump who still refuses to accept his defeat in the 2020 presidential election.

While the House passed its version of the bill in March, the bill is up for a Senate vote, which Republicans consistently vowing to vote against it. In order to advance, the bill will need 60 votes in the Senate. But Republicans are not only the ones who are coming under fire for their stance on the bill. As a legislative filibuster continues, two Democrats are being criticized for refusing to end the filibuster: Joe Manchin of West Virginia and Kyrsten Sinema of Arizona.

Advocates are not only urging the two to end the filibuster but calling for the Democratic Party to abolish the current 60-vote threshold. By doing so, the bill will pass with a simple majority. Since Democrats currently hold only 50 seats in the upper chamber, votes from at least 10 GOP senators are needed to overcome a filibuster.

"This landmark legislation is needed to protect the right to vote, ensure the integrity of our elections, and repair and strengthen American democracy," the Biden administration said.

The measure is needed to ensure that people of color are not consistently impacted by GOP officials attempting to strangle their voice. In the last year alone, GOP officials nationwide have worked to stop people of color from voting by limiting access to polling locations and passing laws that disproportionately impact communities of color by reducing early voting and closing voting locations. States like Georgia and Florida, specifically, have made it more difficult to vote absentee and have limited ballot drop-off boxes.

While calls to eliminate the filibuster continue, Sinema and Manchin oppose its elimination.

As Sinema continues to defend the filibuster, hundreds gathered outside her office to protest in an attempt to change her stance. But according to Sinema, "We have more to lose than gain by ending the filibuster."

"Instability, partisanship and tribalism continue to infect our politics," Sinema wrote in an op-ed published by The Washington Post. "The solution, however, is not to continue weakening our democracy's guardrails. If we eliminate the Senate's 60-vote threshold, we will lose much more than we gain."

"To those who want to eliminate the legislative filibuster to pass the For the People Act (voting-rights legislation I support and have co-sponsored), I would ask: Would it be good for our country if we did, only to see that legislation rescinded a few years from now and replaced by a nationwide voter-ID law or restrictions on voting by mail in federal elections, over the objections of the minority?" Sinema wrote.

She urged her colleagues to debate it and referenced incidents when Republicans controlled the Senate and Democrats used the filibuster to block bills.

"My support for retaining the 60-vote threshold is not based on the importance of any particular policy. It is based on what is best for our democracy," she wrote. "The filibuster compels moderation and helps protect the country from wild swings between opposing policy poles."

But her reasoning behind maintaining the filibuster does not take away from the importance of the For The People Act and the need for it. Activists and others came together Tuesday in efforts to change her stance, and even shared stories about why the bill is needed.

Through the bill, "we have a chance to put in place federal standards for our elections and pass legislation that would really protect our democracy," Emily Kirkland, executive director of Progress Arizona, told The Copper Courier.

According to The Copper Courier, police officials began arresting protesters outside of Sinema's office, but the calls for the filibuster to end continue.