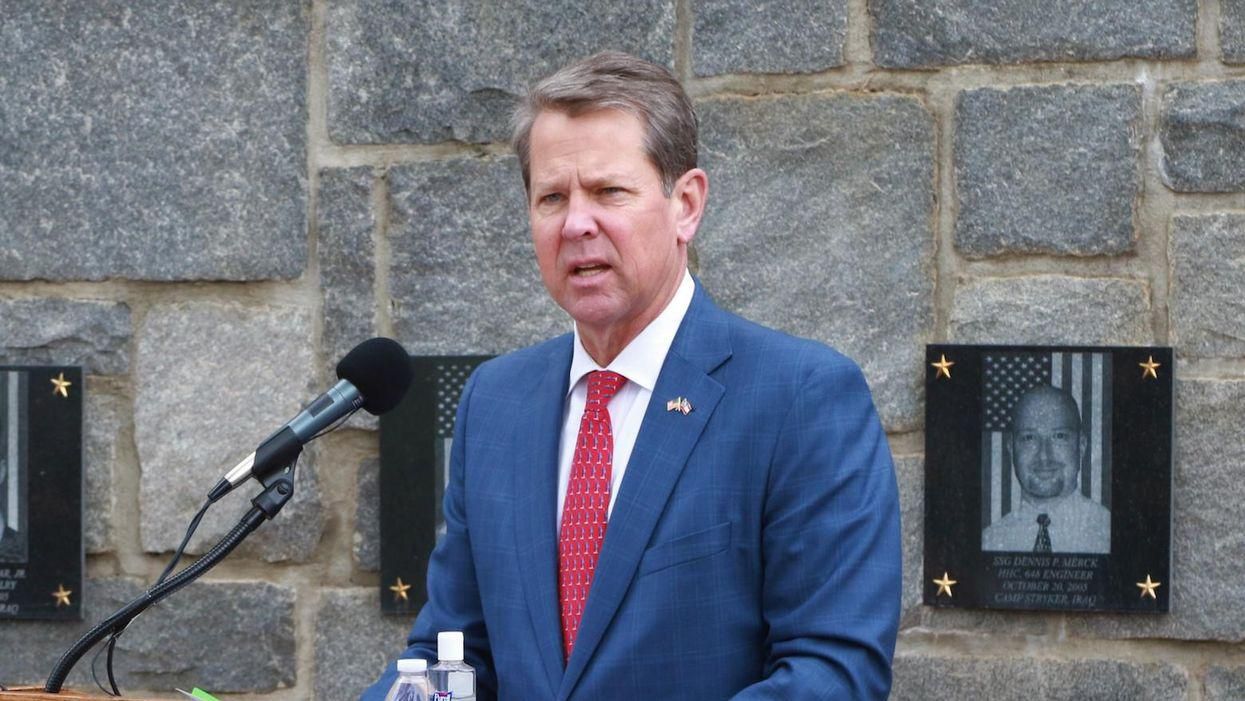 Brian Kemp, the Governor of Georgia, speaks during a virtual Memorial Day ceremony at Clay National Guard Center in Marietta, Georgia on May 21, 2020. Governor Kemp spoke of the ultimate sacrifice that fallen Georgia Guardsmen have made while fighting for the freedoms all Americans possess today. U.S. Army National Guard photo by Capt. Bryant Wine
Kerry Eleveld
and
Daily Kos
June 22, 2021

Republicans in Georgia are moving swiftly to capitalize on their election-law power grab by removing anyone in local election posts who might interfere with their efforts to suppress Democratic voters and manipulate election outcomes.

Lonnie Hollis is exactly that type of troublemaker, which is why Republicans will be ousting her this year from the Troup County election board in West Georgia, according to The New York Times.

"I speak out and I know the laws," said Hollis, a Black woman who has served on the board since 2013. "The bottom line is they don't like people that have some type of intelligence and know what they're doing, because they know they can't influence them."

Hollis and election board members in at least 10 other counties across the state are victims of the Georgia GOP's new power grabs. In Troup County, a local law signed by Gov. Brian Kemp handed over full control of the county election board to Republicans. The GOP-led county commission can now run the table on whatever changes it wants to make to the board, whereas election board members used to be chosen by county commissioners in conjunction with both political parties and the county's three biggest cities. Of the local election board members across Georgia who will likely either be replaced or eliminated, most are Democrats and five are people of color, according to the Times, but all of their seats will most likely be filled by Republicans.

Hollis, for instance, was clearly a problem—for which Republicans now have a solution. She has pushed for making voting more accessible by doing things like opening polls on Sunday and adding a new polling location at a Black church, for instance.

Georgia's statewide voter suppression law is one of 24 new election laws that Republican-led legislatures have enacted in more than a dozen states, with more likely to come. Some of those laws have included both front-end and back-end manipulations to protect against outcomes that Republicans don't like. So alongside restricting who can vote, Republican lawmakers have also taken power away from elected officials, put a stranglehold on state election boards, and empowered themselves to overturn any unfortunate election results.

But these early moves in Georgia suggest the fears of many voting rights advocates are already afoot. If partisan Republicans are already taking action to remove any Democratic and Republican local election board members who threaten to act in good faith in a disputed contest, then it's clear that they are already stacking the decks to get the results they want, regardless of who Georgia voters choose to represent them.

"It's a thinly veiled attempt to wrest control from officials who oversaw one of the most secure elections in our history and put it in the hands of bad actors," said Jena Griswold, chairwoman of the Democratic Association of Secretaries of State and the current Colorado secretary of state. "The risk is the destruction of democracy."

As election law expert and founder of Democracy Docket Marc Elias tweeted, "This is not normal. It is wrong. It is dangerous. And, it is happening."