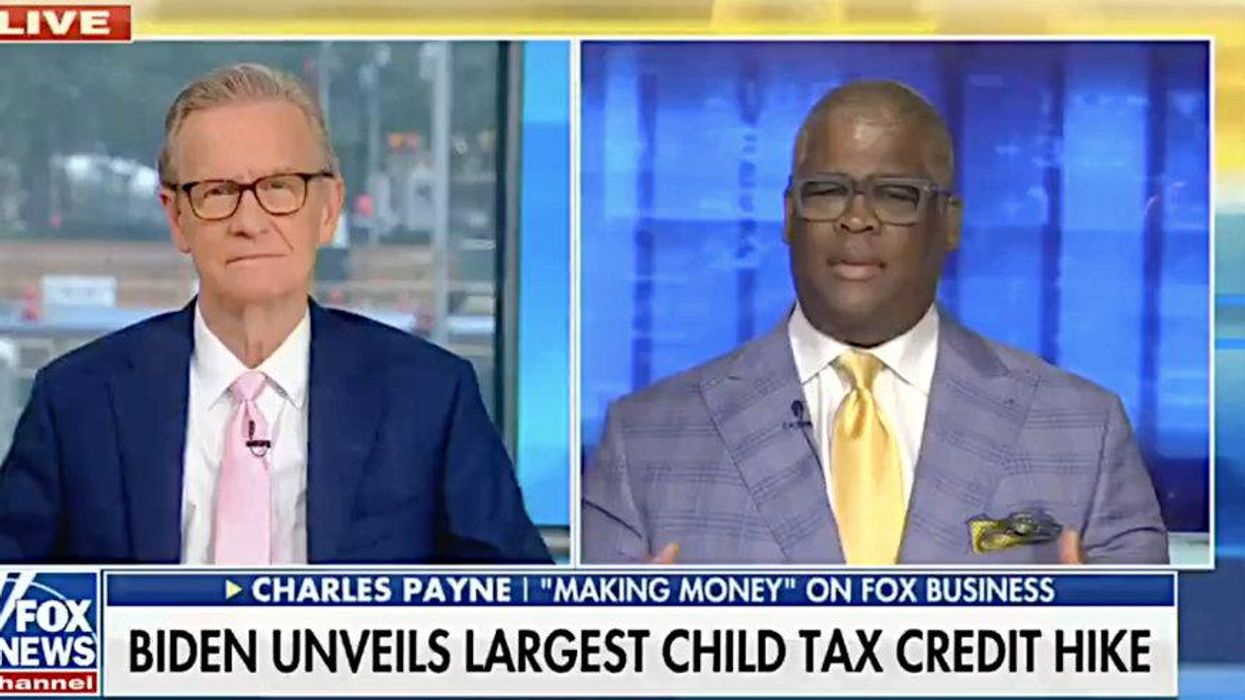 Fox News Business anchor Charles Payne made a staggeringly false series of statements attacking the Biden child tax credit expansion, which goes into effect July 15. Parents could see up to $600 more monthly, with the federal government effectively paying forward the credit so families don't have to wait until they file their annual income tax returns to get the funds up to a year later.

Not according to Payne, who somehow managed to link the child tax credit to critical race theory, falsely claimed it is only for parents who are "not working," suggested it will breed a cycle of poverty for generations while "young ladies" to have more children so they can "make" more money, rather than develop their "God-given gifts."

Literally not one word of that is true.

"Fox & Friends" host Steve Doocy introduced the segment, and appeared to be in support of the program. Payne quickly turned the conversation on its head, politicizing what most American families will welcome as extra money to help with child care, or food, rent, health care, or maybe even starting a business.

"This aims to pay people extra money for not working," Payne said, which is false. Fox News' sister outlet, the New York Post reports the expanded child tax credit "is available for couples who earn $150,000 or less a year, heads of households who earn $112,500 or less and individuals who earn $75,000 or less."

Payne immediately likened giving those parents – 36 million families – to what can only be described as the racist "welfare queen" rhetoric of Ronald Reagan. The chyron called it a "tax credit hike," which could easily be misconstrued by those not paying complete attention as a "tax hike."

"And this is where it becomes very dangerous," Payne alleged. "It doesn't replace anything. If you're on Medicaid, if you're on SNAP, if you're on WIC, if you're a food stamps, if you get Section 8 housing, it doesn't impact any of that. You don't have to work, you don't have to try to work. So what we're going to do is we're going to get young women, you know, young ladies who are going to be sitting around maybe saying, 'I'm not sure what my economic opportunities are,'" he claimed, which is false and sexist, given that the payments are to parents, not just "young ladies."

Payne went on to say the child tax credit "becomes a very attractive alternative to try to make it in a society and you guys have known these stories all morning long with CRT," he said, somehow linking it to child race theory, because that's the stated the goal on the right, to link critical race theory to anything conservatives don't like.

"But if I go down this path, every time I have another child, I get more money, every single time," he complained. Republicans for years have been falsely claiming that they are "pro-family," yet don't enact policies that support families.

"Now of course this is what breaks my heart because I saw it I saw the Great Welfare Society, firsthand, I lived in the midst of it," Payne said, calling it "a heartbreaking, insidious and evil thing."

There is no such thing as the "Great Welfare Society."

The Great Society was a set of programs under President Lyndon Johnson that expanded on President Franklin Delano Roosevelt's "New Deal."

Payne falsely claimed "the people that you argue that you're helping, you'd never give them an alternative to say, 'Hey, I was born with some God-given gifts. I want to dig in, I want to find what they are. I want to cultivate them. I want to I want to nurture them.' Now you'd never do that."

Except that's exactly what the child tax credit program does, helps parents focus on working and focus on their families.

Thanks to Media Matters' Bobby Lewis for the video.