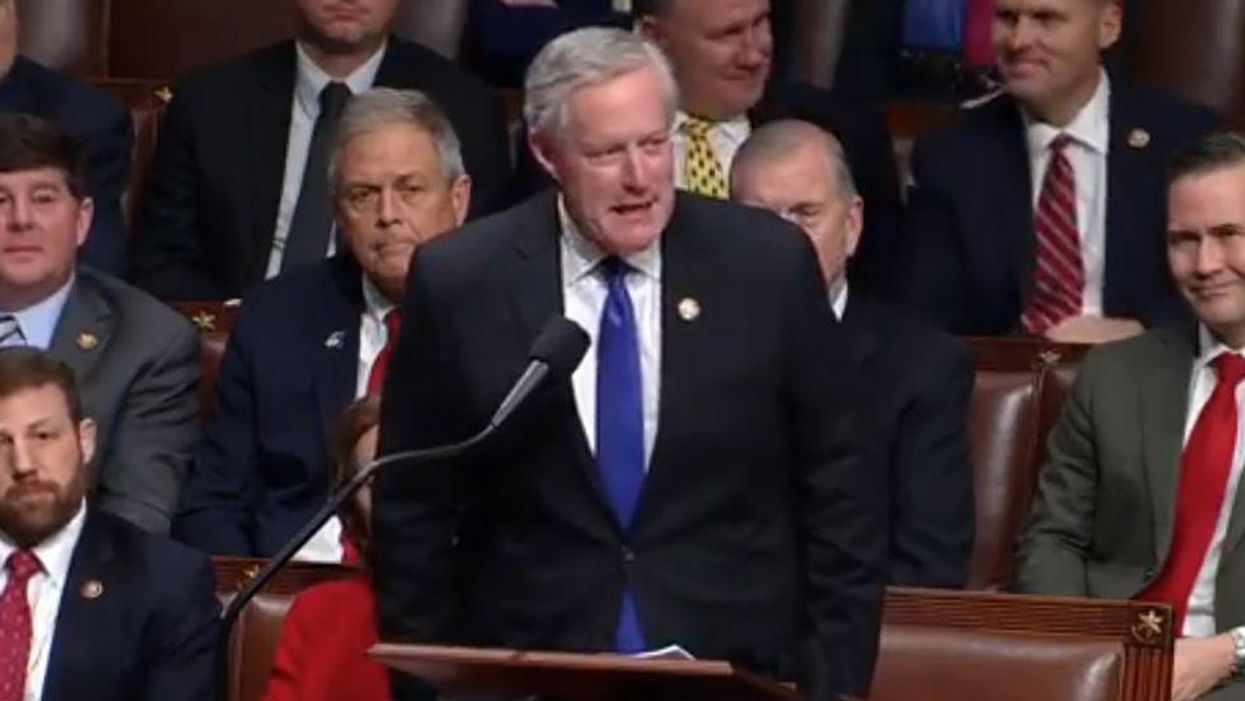 On Tuesday, the House Oversight Committee released a set of selected documents demonstrating the level of pressure that Donald Trump applied in his efforts to pressure the DOJ into investigating claims of election fraud. Part of that was pressure Trump applied to William Barr's replacement over a whole series of claims that were absolutely bizarre. That included no less than three letters directed to the DOJ that insisted that votes had been changed by Italian satellites. It's not clear if any of these satellites was also carrying Jewish space lasers.

But it does mean that then chief of staff Mark Meadows sent letters, in both English and Italian, to the DOJ ordering them to investigate a claim that "Leonardo Aerospace, at Pescara facility, using advanced military encryption capabilities, changed the U.S. election result from President Trump to Joe Biden." This switch was "conducted by the head of the IT department" in coordination with the CIA. It's a claim so ludicrous that it barely merited a mention when it surfaced back in January. Reuters took the time to write up a fact check debunking "Italygate," but it honestly passed by unnoticed by most sometime between claims of intervention by dead Venezuelan dictators, and that time thousands of Trump supporters swarmed the Capitol looking for blood.

But Meadows didn't just pass this letter on to the DOJ with a laugh, he pressed them about this at least three times. That was far from the worst thing that happened over the post election period. As the letters confirm, Trump and Meadows made it crystal clear they expected the DOJ to play their part in wrecking democracy.

In December, William Barr official stepped away from his spot. As Trump prepared to appoint acting replacements, he made sure that the first thing they saw was claims about election fraud. These emails were not just "here's something I want you to investigate." The emails contained talking points that asserted "a Cover-up is Happening regarding the voting machines in Michigan," and, "Michigan cannot certify for Biden." These emails were distributed both to Rosen and to U.S. attorneys in Michigan, and these emails actually hit Rosen's inbox in the hour right before he was officially announced, making it clear that Trump believed his first job was to get in there and break democracy.

After naming Rosen as acting attorney general, and Jeffery Clark as assistant attorney general, Trump then met with them both and pressured them to actively contest the results of the election in several states. Following that meeting, Meadows directed Rosen to have Clark look into supposed issues with signatures in Fulton County, Georgia. Meadows then helpfully sent Clark the cell phone of the U.S. attorney in Atlanta, Byung Pak, so he could involve Pak in this "investigation."

Within days, Clark was working with Trump in a plan to oust the just-appointed acting attorney general, and replace him with Clark, who would then proceed to have the DOJ intervene in the election directly. That plan fell through when audio was released of Trump attempting to pressure the Georgia secretary of state into lying about the results. On the Atlanta end, Pak resigned after being pressured by the White House to get on board with claims that there were fraudulent votes in Fulton County. His decision to leave is clearly difficult for him in the sense that he understands the importance of his role as U.S. attorney. However, it also seems easy, in the sense that he knows Trump is pushing him to a place he cannot go.

In what might be the most jaw-dropping effort, two days before the Georgia plan unraveled, Trump tried to push Rosen into having the DOJ take a case directly to the Supreme Court to "nullify the election." This plan involved a legal brief directed at the Court asking them to "declare that the Electoral College votes cast" in six states that President Trump lost "cannot be counted." The brief also asked that the Court order a "special election" giving Trump a do-over.

And as if attempting to simply get the Supreme Court to throw out the whole election wasn't enough, Meadows also passed along at least five conspiracy theories for the DOJ to investigate. That included not just the letters about the Italian satellite scheme (which seems to be connected to a disgruntled former employee under indictment for cyber crimes against the company), but a link to a YouTube video explaining the whole strange conspiracy theory. It was this letter in particular that generated a very special response from acting deputy attorney general Richard Donoghue. His reply: "Pure insanity." The person behind that YouTube video turned out to be, of course, working with Rudy Giuliani. Which would seem to confirm Donoghue's opinion.

If the pressure was audacious in scope—from demands to investigate a single county, to an attempt to have the DOJ join in to nullify the whole election—it was also amazing in its range. Voting machines in New Mexico. Signatures in Georgia. Satellites in Italy. It seemed there was no rumor or claim that Trump wasn't willing to push, even when it came with no supporting evidence. And in Italian.

As a result of all this, the Oversight Committee will seek testimony from Meadows, Clark, Donoghue, and Pak, along with former associate deputy attorney general Patrick Hovakimian. Bringing in Clark would definitely be a popcorn opportunity, as his scheme to conduct an internal coup at DOJ, oust Rosen, then somehow have the DOJ itself nullify the election is begging to be explained. Considering what Donoghue wrote on the day, it would be interesting what he thinks now about the whole enterprise. And considering that Pak determined that he had to resign his position as U.S. attorney rather than participate in this farce, his testimony might be particularly compelling.

In short—these would be a very interesting set of interviews. If they will appear when, as is certain, Trump tries to assert some form of post-executive privilege. If the House wants to hear them speak, then there has to be a willingness to not just issue subpoenas, but follow through.