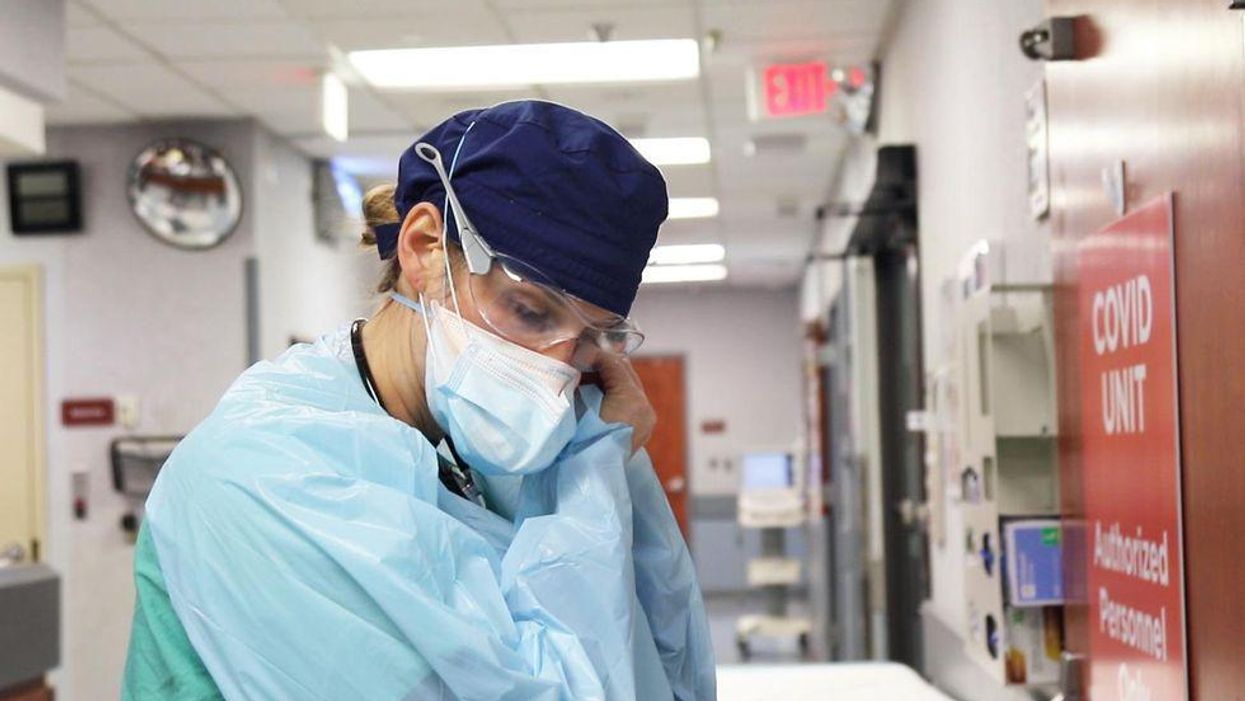 U.S. Air Force Capt. Kimberly Warstler, R.N., stationed at Keesler Air Force Base, Miss., dons proper personal protective equipment to enter a room with a COVID-19 positive patient at the Del Sol Medical Center in El Paso, Texas, Nov. 13, 2020. Warstler is a Lone Star State native, having received her nursing degree from Texas Tech University, and says she's proud to return to help during the COVID-19 pandemic. She, along with approximately 60 service members, are working jointly with the civilian hospitals to assist in the mitigation of the virus and help citizens in need. U.S. Northern Command, through U.S. Army North, remains committed to providing flexible Department of Defense support to the Federal Emergency Management Agency in support of the whole-of-America COVID-19 response. (U.S. Army photo by Sgt. Samantha Hall)
Jake Johnson
and
Common Dreams
June 30, 2021

In Bangladesh, troops are preparing to patrol the streets to enforce newly imposed stay-at-home orders. Australia, recently heralded as a pandemic success story, is returning to strict lockdowns. Scotland is seeing a record-breaking surge in new coronavirus infections. Indonesia is teetering on the edge of a public health catastrophe.

While many rich nations continue to ease public health guidelines as they gradually move in the direction of normalcy, an ultra-contagious Covid-19 mutation known as the Delta variant is spreading like wildfire in countries that have struggled to vaccinate their populations and in communities that have refused to participate in inoculation drives, forcing governments to resort to drastic measures contain the damage.

"The new curbs on travel and daily life stretched from Australia and Bangladesh to South Africa and Germany, where authorities over the weekend set new limits on travelers from 'virus-variant zones' such as Portugal and Russia," the Washington Post reported Monday. "South Africa on Sunday extended a nightly curfew and introduced a ban on gatherings, alcohol sales, indoor dining, and some domestic travel for 14 days to halt a worrying surge in cases driven by the Delta variant."

First detected in India, the Delta variant is rapidly emerging as the dominant coronavirus strain across the globe. The mutation—which is estimated to be 60% more transmissible than the highly contagious Alpha variant—has now been detected in more than 80 countries, and it accounts for over a third of all new cases in the United States.

The Delta strain is the "most contagious variant we've seen so far," said Dr. Ashish Jha, the dean of the Brown University School of Public Health.

"It is wreaking havoc around the world, and will cause problems here," Jha added, referring to the U.S.

While the spread of Delta poses a particularly severe threat to Africa, South America, and other regions without adequate access to vaccines, the variant also puts at risk rich countries that continue to stand in the way of a patent waiver aimed at boosting the global vaccine supply.

As the Financial Times reported last week, the "rising number of cases have raised concerns that the Delta variant could halt the progress the E.U. has made over past the two months" in driving down coronavirus infections and deaths.

The leadership of the European Union—along with Canada and the United Kingdom—has been among the principal opponents of the proposed vaccine patent waiver, which would temporarily suspend global intellectual property rules that are barring manufacturers from producing generic vaccines.

The U.S.—a supporter of the patent waiver—and other rich countries have pledged to collectively donate roughly a billion coronavirus vaccine doses to poor nations over the next year, but experts estimate that around 11 billion doses are needed to vaccinate 70% of the global population.

"The E.U.'s opposition to the TRIPS waiver is no longer a Europe-only topic," said Jaume Vidal, senior policy adviser at Health Action International. "It has become an issue of global concern as... the need for a waiver to diversify and scale up production is more pressing than ever."

Just over a month after classifying Delta as a "variant of concern," World Health Organization (WHO) officials stressed last week that the mutation has the potential to be more deadly than other strains because "it's more efficient in the way it transmits between humans."

Dr. Mike Ryan, executive director of the WHO's health emergencies program, warned during a press conference that the variant "will eventually find those vulnerable individuals who will become severely ill, have to be hospitalized, and potentially die."

To stem the spread of the Delta variant, the WHO recommended last week that even fully vaccinated people should continue to wear masks and take other coronavirus-related precautions—advice that conflicts with the U.S. Center for Disease Control's recent relaxation of mask guidelines for inoculated individuals.

"Vaccine alone won't stop community transmission," said Dr. Mariangela Simao, WHO's assistant director-general for access to medicines and health products. "People need to continue to use masks consistently, be in ventilated spaces, hand hygiene... the physical distance, avoid crowding. This still continues to be extremely important, even if you're vaccinated, when you have a community transmission ongoing."

Public health experts have long feared that leaving vast swaths of the world without access to vaccines risks allowing vaccine-resistant variants to emerge, a nightmare scenario that would mean a prolonged pandemic and more avoidable deaths. As Nature's Ewen Callaway reported last week, "Delta is moderately resistant to vaccines, particularly in people who have received just a single dose."

"A Public Health England study published on 22 May found that a single dose of either AstraZeneca's or Pfizer's vaccine reduced a person's risk of developing Covid-19 symptoms caused by the Delta variant by 33%, compared to 50% for the Alpha variant," Callaway noted. "A second dose of the AstraZeneca vaccine boosted protection against Delta to 60% (compared to 66% against Alpha), while two doses of Pfizer's jab were 88% effective (compared to 93% against Alpha)."

In the U.S., local governments are beginning to take action to prevent outbreaks amid growing concerns that Delta cases are on track to explode across the country.

On Monday, the Los Angeles County Department of Public Health advised that residents—including those who have been fully vaccinated—wear masks while in indoor public spaces.

"Until we better understand how and to who the Delta variant is spreading, everyone should focus on maximum protection with minimum interruption to routine as all businesses operate without other restrictions, like physical distancing and capacity limits," county officials said in a statement.

Dr. Eric Feigl-Ding, a senior fellow at the Federation of American Scientists, warned Monday that the U.S. is just several weeks away from experiencing a Delta surge similar to the U.K.'s, which was accompanied by a rise in hospitalizations and deaths.

According to the latest data, less than half of the U.S. population is fully vaccinated, meaning large segments of the country are potentially vulnerable to the strain. As Common Dreams reported last week, Missouri communities that have either declined to get vaccinated or struggled to gain access to shots are quickly becoming U.S. hot spots for the Delta variant.

"We have seen this movie before elsewhere—the Delta variant creeps up from the underbelly of falling cases of other variants, overtakes all variants, and then causes a surge," said Feigl-Ding. "Don't let this happen where you are."