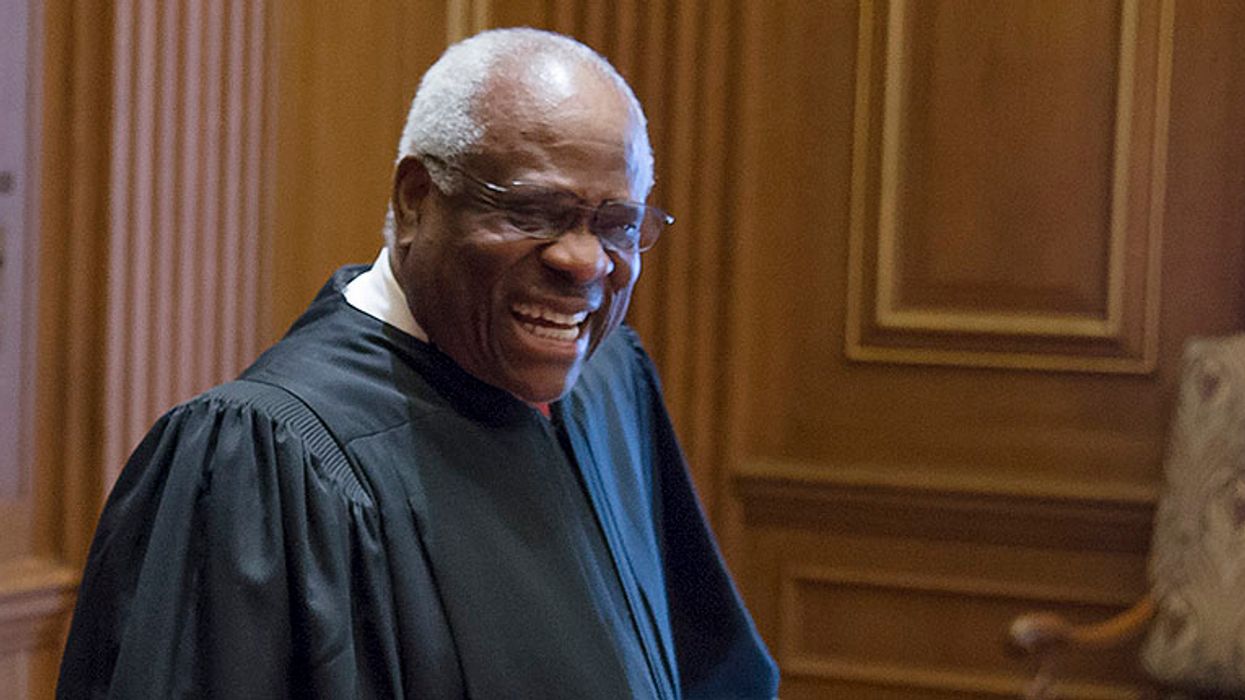 Sonny Perdue is sworn in as the 31st Secretary of Agriculture by U.S. Supreme Court Justice Clarence Thomas with his wife Mary and family April 25, 2017, at the Supreme Court in Washington, D.C.. Photo by Preston Keres
Brett Wilkins
and
Common Dreams
June 23, 2021

In a landmark ruling for student free speech in the digital era, the United State Supreme Court on Wednesday ruled that a Pennsylvania high school violated a cheerleader's First Amendment right to freedom of speech when it disciplined her following a profanity-laden social media post.

The justices ruled 8-1 in Mahanoy Area School District v. B. L. (pdf) in favor of Brandi Levy, who was kicked off the junior varsity cheerleading team at Mahanoy Area High School in 2017 after she posted a Snapchat photo of herself and a friend flipping their middle fingers with the text, "fuck school fuck softball fuck cheer fuck everything." The post was published off campus and after school hours.

"The school itself has an interest in protecting a student's unpopular expression, especially when the expression takes place off campus, because America's public schools are the nurseries of democracy," Justice Stephen Breyer wrote for the majority. Justice Clarence Thomas was the lone dissenter in the case.

"It might be tempting to dismiss B. L.'s words as unworthy of the robust First Amendment protections," Breyer wrote. "But sometimes it is necessary to protect the superfluous in order to preserve the necessary."

Cheerleader Brandi Levy was kicked off her team for criticizing her school on Snapchat. In a win for student free… https://t.co/5DXFzjrOp4
— Allegra Kirkland (@Allegra Kirkland) 1624459655.0

Breyer also wrote that the high court does not "now set forth a broad, highly general First Amendment rule stating just what counts as 'off campus' speech and whether or how ordinary First Amendment standards must give way off campus to a school's special need to prevent... substantial disruption of learning-related activities."

Levy, who is now an 18-year-old college student, welcomed the ruling.

"The school went too far, and I'm glad that the Supreme Court agrees," she said in a statement after the decision. "I was frustrated, I was 14 years old, and I expressed my frustration the way teenagers do today. Young people need to have the ability to express themselves without worrying about being punished when they get to school."

"I never could have imagined that one simple snap would turn into a Supreme Court case, but I'm proud that my family and I advocated for the rights of millions of public school students," she added.

Civil liberties advocates also hailed the ruling as one of the most important free speech decisions in decades.

Our client Brandi was removed from the cheerleading team at her high school after posting a photo with the text “fu… https://t.co/9SiKSSrbX7
— ACLU (@ACLU) 1624461083.0

"Protecting young people's free speech rights when they are outside of school is vital, and this is a huge victory for the free speech rights of millions of students who attend our nation's public schools," said ACLU legal director David Cole.

"The school in this case asked the court to allow it to punish speech that it considered 'disruptive,' regardless of where it occurs," Cole continued. "If the court had accepted that argument, it would have put in peril all manner of young people's speech, including their expression on politics, school operations, and general teen frustrations."

"The message from this ruling is clear," added Cole. "Free speech is for everyone, and that includes public school students."

Witold Walczak, legal director of the ACLU of Pennsylvania—which represented Levy—said, "I am proud of our team at the ACLU, who effectively argued before three courts that public school students should not be monitored 24/7 by school officials."

"I am especially proud of Brandi and her family, who stood up for one of the most fundamental rights that we cherish in this country, the right to speak freely without government interference," added Walczak.