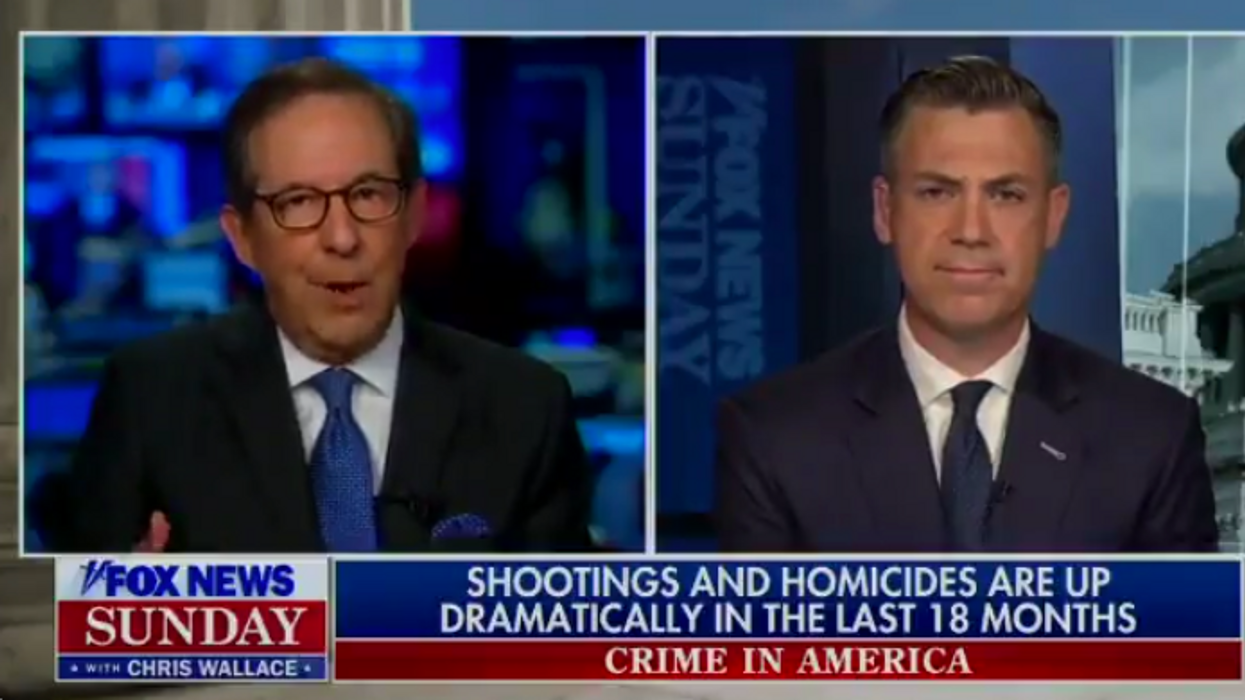 It seldom takes much to put a Republican in his or her place. Simple facts do it on most occasions, and Fox News anchor Chris Wallace had plenty of them for GOP Rep. Jim Banks on "Fox News Sunday." Wallace responded to Banks' accusation that Democrats opposing police brutality are to blame for increasing crime rates with a clip of the top Democrat, President Joe Biden promoting his $350 billion anti-crime plan. "That means more police officers, more nurses, more counselors, more social workers, more community violence interrupters to help resolve issues before they escalate into crimes," Biden said.

Wallace pointed out that Banks opposed the spending, which was part of the American Rescue Plan, as well as every other Republican in Congress. "Congressman Banks, you voted against that package, against the $350 billion, just like every other Republican in the House and Senate, so can't you make the argument that it's you and the Republicans who are defunding the police?" Wallace asked.

Republicans who've grossly mischaracterized the defund the police effort have repeatedly accused Biden of supporting their misinterpretation, which is to strip law enforcement agencies of all funding leaving rapists and murderers free to roam suburban streets. The actual call of the defund the police movement is to reallocate a portion of public safety funding to preventative social services, mental health resources, and education programming.

Banks wrote in a Fox News op-ed that the murder rate jumped by an average of 30% in America's biggest cities in 2020, and that there is "overwhelming evidence connecting the rise in murders to the violent riots last summer and the Defund the Police movement." He of course cited no such "overwhelming evidence" that the protests, which were actually aimed at stopping police violence against people of color, caused the uptick in violent crimes.

"The saddest part about Democrats' own responsibility for rising violent crime is that it's now impossible the White House to work to reduce violence in America – they would have to denounce everything they stood for less than a year ago," Banks wrote. He attempted to name Rep. Rashida Tlaib in continuing the same argument on Wallace's show. Banks was referring to Tlaib's statement following the death of 20-year-old Daunte Wright, in which she said policing in the United States was "inherently and intentionally racist." Wright, a Black man, was shot and killed in Brooklyn Center, Minnesota, about 10 miles north of the Hennepin County Courthouse, where ex-Minneapolis police officer Derek Chauvin was on trial for murdering George Floyd, another Black man. Ex-cop Kim Potter claimed she was reaching for her Taser and grabbed her gun instead when she shot Wright on April 11, and Chauvin was convicted of murdering Floyd and sentenced to 22 and a half years in prison on Friday.

Wallace cut Banks off at the mention of Tlaib. "I heard you make that point but I'm asking you there's $350 billion in this package the president says can be used for policing and let me put up some of the specific things that he said," Wallace said. "Congressman Banks, let me finish and I promise I will give you a chance to answer."

"The president is saying cities and states can use this money to hire more police officers, invest in new technologies and develop summer job training and recreation programs for young people," Wallace continued. "Respectfully, I've heard your point about the last year, but you and every other Republican voted against this $350 billion." With no answer for Wallace and no actual solutions to propose to help reduce crime, Banks continued trying to pin rising crime on progressive Democrats who as he put it "stigmatized one of the most honorable professions in America." It's a shame he didn't actually listen to the protesters he's now trying to demonize. Banks might've actually learned the truth of what racist policing looks like in Black and brown communities.