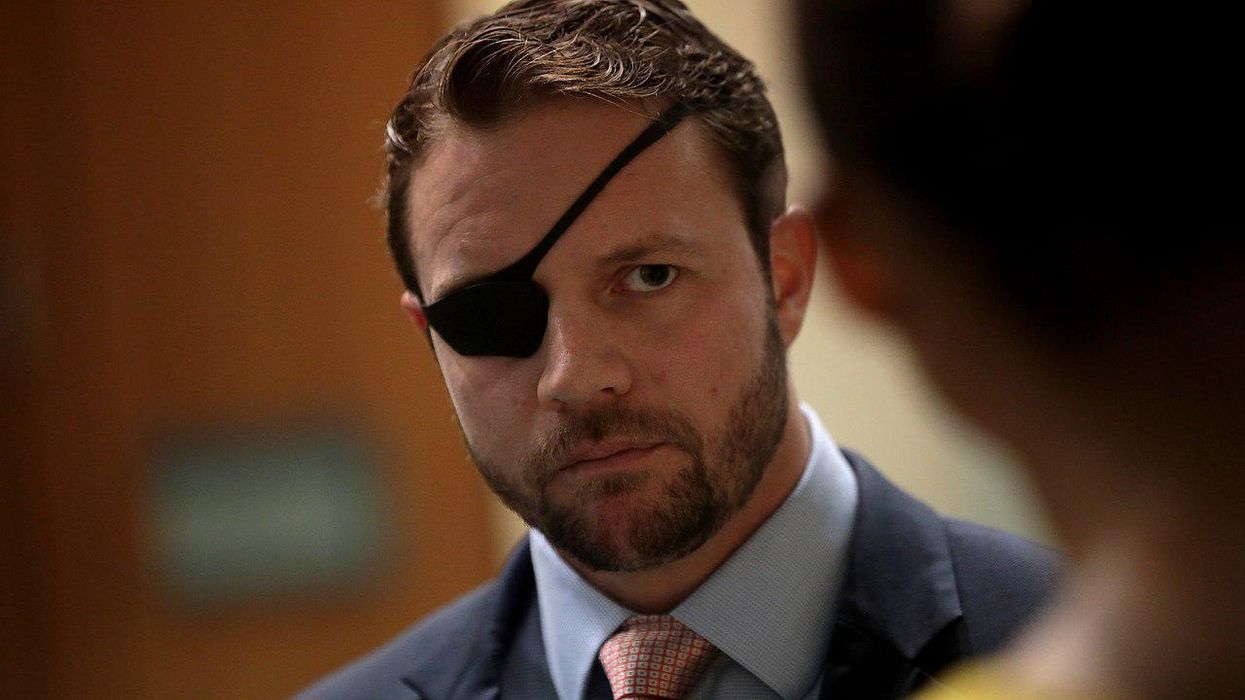 Athlete Gwen Berry, who is on the U.S. Olympic team, recently protested against police brutality and racism by turning away from the American flag during a ceremony — and many Republicans are freaking out, not unlike all the Republicans who freaked out over African-American football players who protested racism by taking a knee.

Rep. Dan Crenshaw of Texas is demanding that Berry be thrown off of the U.S. Olympic team, saying that "the bare minimum requirement" of competing in U.S. Olympics should be "that you believe in the country you're representing." And another Texan who is playing the false patriotism card is Sen. Ted Cruz, who tweeted:

GOP activist Meaghan McCain, one of the hosts of "The View" and daughter of the late Sen. John McCain, said of Berry's protest, "That it is not appropriate or patriotic to go to a foreign country where you're supposed to be representing America and act like it's just about you. It's not about you. It's about all of us."

'I Will Die on This Hill!' @MeghanMcCain Denounces Olympian Gwen Berry's Protest as 'Not Appropriate or Patriotic' https://t.co/hZUKvx94EK
— Mediaite (@Mediaite) 1624982525.0

If you want to represent our nation abroad at the Olympics, then you should respect our flag! No other country woul… https://t.co/bmMs9K6a07
— Lauren Boebert (@Lauren Boebert) 1624889876.0

Ben Shapiro, the far-right talk radio host who once embarrassed himself by describing right-wing British conservative Andrew Neil as a "leftist," posted:

The utter ingratitude with which so many Americans treat the gift they have been given in living in the United States is truly appalling.
— Ben Shapiro (@Ben Shapiro) 1624885045.0

But not everyone on the right is attacking Berry. Former Rep. Joe Walsh, a one-time Tea Party activist who became a blistering critic of former President Donald Trump, tweeted that Republicans are resorting to "cancel culture" with Berry:

Others are rising to Berry's defense, some of them pointing out that the far right hypocritically rail against "cancel culture" until a liberal says something they don't like:

Typical rhetoric. Omitting key information. Vilifying her character. Focusing on what is being done instead of why.… https://t.co/o37EeKj3Pt
— Maxwell Pearce (@Maxwell Pearce) 1624838245.0

@benshapiro For most of us, it isn't about being ungrateful. It's about wanting to give thanks by pushing for the c… https://t.co/sP8bhfdbve
— James Ayotte (@James Ayotte) 1624885113.0

Washington Post columnist Sally Jenkins finds it ridiculous that Republicans freak out whenever an African-American athlete protests racism or injustice, and she was especially critical of Crenshaw — writing, "There goes the dangerous Black athlete, betraying America again. Every time one of them stages a protest, some White politician has the sudden authoritarian urge to call for their banishment. Gwen Berry is no one's internal enemy — especially not by today's flagpole-stabbing, Capitol-sacking standards — but Rep. Dan Crenshaw (R-Tex.) is so threatened by her that he has demanded her removal from the U.S. Olympic team.

Jenkins adds, "For what, exactly? For turning a skeptical shoulder to an American banner. Now that's an eggshell brand of patriotism, if it can't withstand Berry's biceps. It's the tired-outness of Crenshaw's rhetoric that is so discouraging. He either doesn't recognize, or doesn't want to recognize, what a baneful old tradition he is following when he suggests a Black protester must be sanctioned for anti-Americanism."