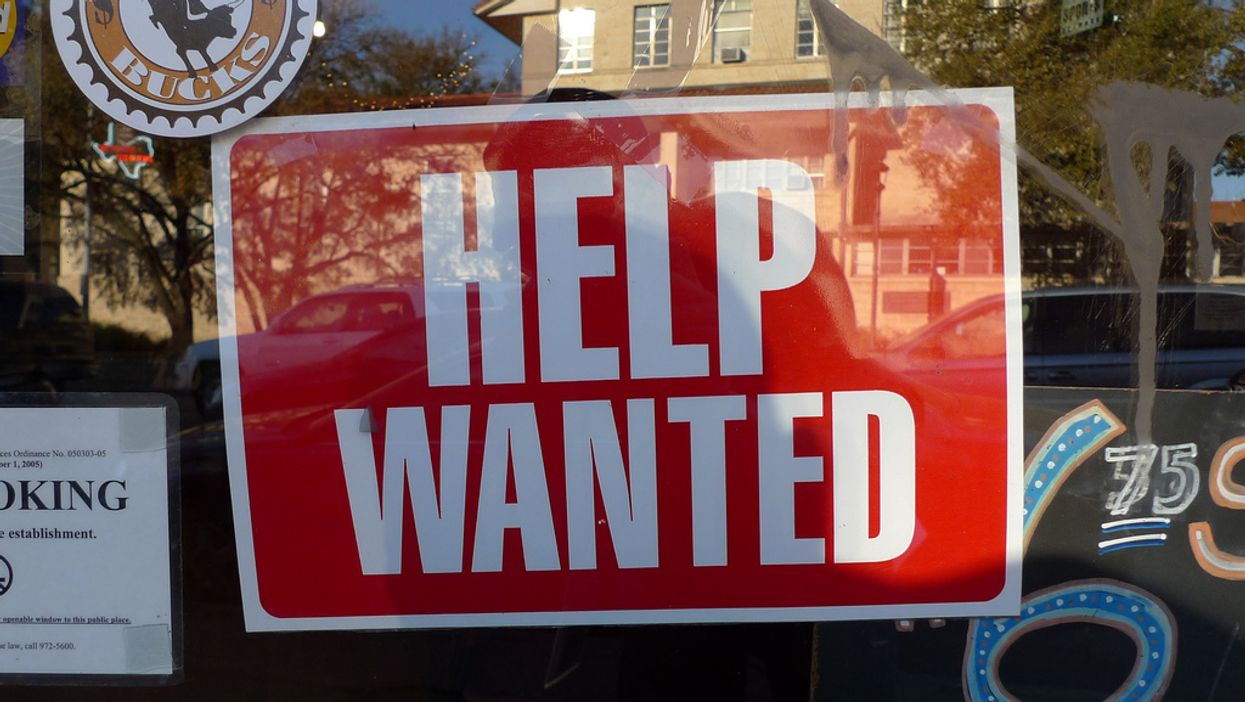 Disgruntled business owners around the country have been complaining loudly about the lack of hired help available to them as the nation slowly emerges from the COVID-19 pandemic. Some of these folks have gotten positively churlish about it, declaring "No one wants to work anymore," and blame the worker shortage on the additional $300 per week some are receiving to bolster their normal unemployment benefits, an effort instigated by Democrats to try to compensate Americans for the economic calamity left in the wake of hundreds of thousands of business closures.

But an investigation by Eli Rosenberg for the Washington Post, based on interviews of several business owners throughout the country, suggests that the hiring problem facing employers has less to do with extended unemployment benefits and more to do with the the fact that American workers simply don't want to go back to jobs that won't pay a decent wage. As Rosenberg found, businesses that increase their pay scales are actually being deluged with applications from willing workers.

As Rosenberg notes, many of the complaints about "unwilling workers" are coming from businesses long-accustomed (in the era before COVID-19) to paying their employees the minimum allowable wage:

Across the country, businesses in sectors such as food service and manufacturing that are trying to staff up have been reporting an obstacle to their success — a scarcity of workers interested in applying for low-wage positions.

These people assumed that once the pandemic started to wane, the American economy could simply be flipped on like a light switch after its year-long hibernation, with Americans marching dutifully back to work for these same companies as if COVID-19 had never happened. Encouraged by Republican governors and Fox News, many are now blaming their inability to attract workers on the extra unemployment benefits afforded by the COVID relief legislation passed by Democrats and signed into law in March. In this blinkered view, the prospect of giving unemployed individuals and families an additional $300 per week through September 2021 was nothing but an an extravagant windfall for tens of millions of Americans, one that prompted able-bodied workers to sit at home watching TV and playing video games rather than rushing back to work for these companies that pay a paltry $7.25 an hour in wages.

The idea that an additional $300 per week could possibly substitute for holding a regular job in order to pay their mortgages, rent, health insurance, food, car payments, transportation, utilities and the multitude of intractable expenses most Americans face in any given month, was always a myth. It conveniently ignored the fact that if people were actually shirking work for such a paltry sum, then the wages they were forsaking were just as paltry. As one unemployed worker, interviewed for Business Insider put it, "These guys are just dumbasses if they actually think that the UI is the problem and not the wage."

Nevertheless, this myth has been a useful cudgel wielded by Republicans against the unemployed, prompting GOP governors in 25 states to cut off extended aid in hopes of forcing workers to return to these dismal, low-paying jobs. The very fact that these governors acted in such unison and in such a wholly partisan fashion—based on no hard economic evidence whatsoever—suggests that something far more fundamental is at stake here for the Republican party than simply trying to force people back into low-paying jobs. What we may be seeing in the refusal of workers to fill these types of jobs are the early signs of a labor force that is collectively rethinking its relationship to work.

As explained in Rosenberg's article, the data is anecdotal, but the trend is unmistakable: once businesses start treating employees as an asset to be maximized rather than a necessity to be exploited, their hiring woes immediately vanish. Rosenberg profiles several business owners, including Patrick Whalen who owns five restaurants in North and South Carolina, all of which had enjoyed success before the pandemic. As people finally began to venture out to eat, his restaurants filled up again. Suddenly he couldn't find enough people to staff them, and was soon facing a wave of negative reviews.

But he didn't whine about it. He didn't try to blame anyone. He simply increased his wages from $12 to $15, and added a tip line for the kitchen workers who (unlike the wait staff) wouldn't normally have received tips, a move that pushed their total hourly wages to over $23 an hour.

Applicants began pouring in nearly overnight, Whalen said. A manager at one of his restaurants, Tempest, told him that 10 people walked in to drop off résumés over the course of one week after the policy change, compared with just 15 people over the four previous months.

The owner of Punch Pizza, a chain of pizza shops with a dozen locations in the Minneapolis/St. Paul area, had similar results when its owner raised wages from $11 to $15 an hour: as Rosenberg observes, "Job applications increased fivefold on its website and were 10 to 15 times higher on the jobs portal Indeed." Rosenberg cites similar examples for restaurant chains in Buffalo, Detroit, Oakland and Philadelphia, all of which elected to increase their starting wages.

The routine objection to increasing workers' salaries is that doing so will raise the cost of doing business to the point where the business itself cannot survive. That too is debunked by Rosenberg's investigation. Yes, some businesses compensated for their increased labor costs by slightly raising their prices, but the increases needed to do that turned out to be minimal, for the most part:

Three of the 12 businesses interviewed said that they had raised prices for consumers to help offset the wage increase. White Castle increased menu prices in the Detroit area after increasing its minimum wage there to $15 an hour, as did another restaurant that raised wages, Brown Sugar Kitchen in Oakland, Calif. The Midwest-based clothing and design store Raygun increased prices by about 1 percent after raising wages to an average of $15 last year, owner Mike Draper said.

Rosenberg's research acknowledges that every business's situation will be different; in Philadelphia, HipCityVeg, a vegan restaurant, estimated that its veggie-burger prices might increase by 25 cents, but they didn't expect an all-out customer revolt because of this. Another had to trim hours and staff, mainly for seasonal workers. Others acknowledged that they might have to operate at a loss for a limited time but that the higher quality of their services (thanks to happier, more dedicated workers) was expected to balance that factor out over time. The improved staffing situation at Whalen's restaurants, for example, has markedly increased its overall sales numbers, as reviews have improved and satisfied customers return.

Rosenberg's article notes that in addition to increasing worker pay, employers are introducing other measures to improve working conditions, such as guaranteeing sick leave and paid time off. And some, including an owner of a hardware store chain in the Washington, D.C., area who has raised her employees' wages, have frankly acknowledged that raw material shortages due to the pandemic rather than increased wages are driving whatever price increases she has to pass on to her customers.

As the COVID-19 pandemic raged last year, several voices pointed out that such a drastic, unprecedented employment catastrophe also provided a rare opportunity to rethink the relationship between labor and capital, and specifically between workers and management. Although Rosenberg's interviews are anecdotal, it does appear that many businesses are re-evaluating their past policies, not necessarily out of some sense of altruism, but for their own economic benefit and continued survival. Rosenberg concludes his investigation with a quote from Gina Schaeffer, owner of that chain of hardware stores in and around Washington, D.C.:

"There's a shaming that's happening to working-class people," said Schaefer, the owner of the D.C.-area hardware stores. "Nobody talks about the fact that the economy is going to fall apart when a tech guy gets a $195,000-a-year salary with a 5 percent raise every year, or when lawyers are making $300,000. This conversation only happens when you're talking about the people who make the lowest wages. And I think as a society, that's just really insulting."

What Rosenberg's article ultimately shows us is that from a labor perspective the America that emerges from the COVID-19 pandemic does not have to be the same America that entered into it. Many businesses are finding out the hard way that they can no longer count on a workforce willing to accept substandard wages, and have decided that the best course is to convince Republican governors to declare a five-alarm fire, trying to force people back to work for the same, dismally low pay. Other, more forward-thinking businesses are embracing a more generous and fairer ethic that elevates both the pay and dignity of their employees, discovering that such an approach works in everyone's interests.

It's impossible at this early stage to say which approach will ultimately win out, but as more workers find alternative, higher paying opportunities available to them, history and human nature suggest they will naturally be far less willing to settle for anything they consider substandard, unfair, or inferior.