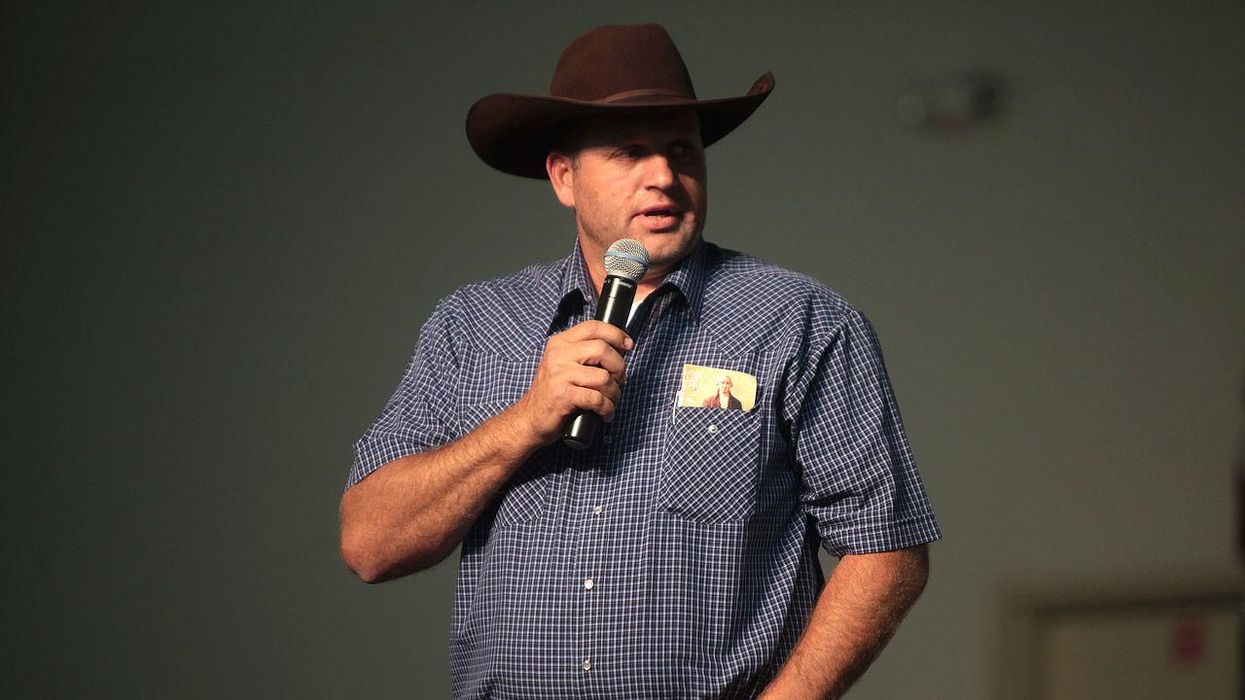 Ammon Bundy speaking at a forum hosted by the American Academy for Constitutional Education at the Burke Basic School in Mesa, Arizona in 2014, Gage Skidmore
Alex Henderson
June 23, 2021

Ammon Bundy became infamous in 2014 when he was involved in an armed standoff with federal officials in Nevada, where his father, rancher Cliven Bundy, refused to pay grazing fees. The younger Bundy, also known for his armed occupation of federal land in Oregon, is now running for governor of Idaho as a Republican — and Washington Post reporter Paulina Villegas points to his campaign as part of a broader trend of far-right anti-establishment populism.

In an article published on June 23, Villegas explains, "Over the weekend, Bundy, 45, announced his bid to be governor of Idaho in what analysts say is a sign of state politics moving further to the right — and a wider national trend of anti-establishment candidates going mainstream."

One of the people interviewed for Villegas' article was Jeffrey Lyons, an assistant political science professor at Boise State University in Idaho. Lyons believes that the same far-right forces driving Bundy's gubernatorial campaign are driving far-right members of Congress such as Rep. Marjorie Taylor Greene of Georgia and Rep. Lauren Boebert of Colorado.

Lyons told the Post, "In American politics, it's a good time to be in the ideological extreme — and we have seen success in local, state and federal elections and across both parties (with) people running on an anti-establishment platform…. People aren't satisfied; so, you have this sense of anger toward how things have been going — and as a result, rejection to people who have been running the show."

To Ammon Bundy's critics — who range from liberals and progressives to Never Trump conservatives — he is dangerous. But in the far-right militia movement, he is viewed as a freedom fighter. The Bundy Ranch standoff in Nevada in 2014 was followed by another incident only two years later in 2016, when he led an armed occupation of the Malheur National Wildlife Refuge in Oregon. Bundy was later acquitted of federal conspiracy charges.

In 2020 and 2021, Bundy has continued to engage in conflicts with the law —albeit less serious ones than in 2014 or 2016. An outspoken anti-masker, coronavirus truther and opponent of stay-at-home orders and COVID-19-related restrictions, Bundy has led various anti-lockdown protests and was charged with criminal trespass after disrupting a meeting of the Idaho State Legislature. And in March 2021, he was arrested again when he refused to wear a mask inside an Idaho courtroom.

When Ammon Bundy officially announced his gubernatorial campaign in a video posted on June 19, he declared that he is "sick and tired of all the political garbage" and said, "I'm tired of our freedoms being taken from us, and I'm tired of the corruption that is rampant in our state government."

Robert Futrell, a sociology professor at the University of Nevada, Las Vegas, views Bundy's gubernatorial campaign as an example of "extremists" who were considered "fringe" in the past trying to paint themselves as mainstream.

Futrell told the Post, "When you move that acceptability, you are changing the conversation in important ways that allow the most extreme to have opportunities to get into that conversation and claim legitimacy that they weren't able to claim years ago."