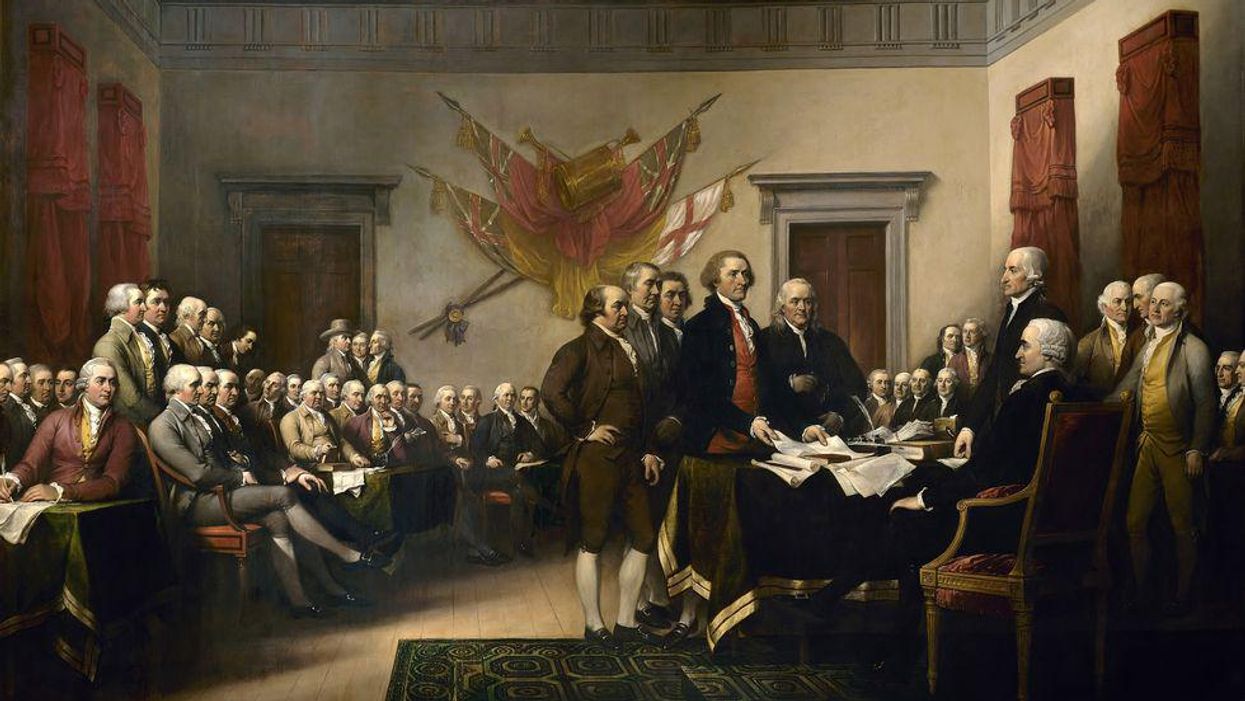 John Trumbull's painting, Declaration of Independence, being represented to the Congress.

One hundred political scientists who study an array of topics, including the back-sliding of democracies into autocracies, co-signed a letter Tuesday urging the United States Congress to pass legislation protecting and expanding access to the franchise. The joint letter came as the president called for the same thing during a speech commemorating the 1921 Tulsa Massacre. It came as conservative Democrats in the Senate are wrestling with ways to pass such legislation, and even if they should.

The letter was in reaction to myriad efforts by lawmakers in GOP-controlled states to continue efforts begun in 2013 to shrink their electorates to sizes prejudicial to the Republicans. Those efforts were supercharged in the wake of the 2020 presidential election. The former president keeps lying about losing due to voter fraud. State-level Republicans are using the lie to suppress voting in the name of "election integrity."

"The most effective remedy for these anti-democratic laws at the state level is federal action to protect equal access of all citizens to the ballot and to guarantee free and fair elections," said the letter, posted by New America, a think-tank. "Just as it ultimately took federal voting rights law to put an end to state-led voter suppression laws throughout the South, so federal law must once again ensure that American citizens' voting rights do not depend on which party or faction happens to be dominant in their state legislature, and that votes are cast and counted equally, regardless of the state or jurisdiction in which a citizen happens to live. This is widely recognized as a fundamental principle of electoral integrity in democracies around the world."

This letter is good in and of itself, and I trust the Democratic leadership is taking notes. What I find most interesting, though, is its effort to define democracy morally. The Republicans "are seeking to restrict access to the ballot, the most basic principle underlying the right of all adult American citizens to participate in our democracy."1 If you're not looking for it, you might miss it. What this does is place equality at the heart of democracy. Vitally, without equality, a democracy can't be free, fair or full. This is what's at stake. This is what pro-democracy activists are fighting to preserve.

Of course, democracy is at the heart of our national myth. But anyone with any sense of our history knows democracy really was not at the heart of the founding. Many of the framers likened democracy to anarchy and violence. A republic was the preserve of those who had the capacity to participate in it, which was to say, enough invested in the established order to fight efforts to blow it up. The "men" in "all men are created equal" was meant to convey equality among equals, which, to the founders, obviously didn't include property-less men, non-white men and sure-as-hell not women.

So what we're really talking about when we talk about democracy is the slow, crawling expansion of the democratic franchise since the founding. First, political participation was restricted to property-owning white men. Then it was expanded to all white men. Then all men, white and non-white (after the Civil War and the ratification of the 14th Amendment). Then all women. With each expansion, the franchise became more equal but not fully equal. That didn't happen until the civil-rights era of the last century.

The 100-year reign of Jim Crow in the American South (but by no means restricted to the American South) was back-sliding of the kind we are now being warned about. After all, the Reconstruction amendments (the 13th, 14th and 15th) granted equal rights and protection to former slaves. But just as Republican-controlled states are now shrinking electorates down to prejudicial sizes, Democrat-controlled states back then did, too. District-by-district, state-by-state, they whittled at equal rights and protection until white people were, in effect, feudal lords. It took federal law and federal power (the 1964 Civil Rights Act and the 1965 Voting Rights Act) to smash these autocracies. It took federal law and power to make American democracy liberal.2

So when 100 political scientists call on Congress to protect democracy, what they are really calling for is the protection of all the gains made in our history, and that reversing them not only offends democracy but morality, too. This is important to keep in mind. The Republicans in Georgia, Florida, Texas and other states, most of them in the American South, deny allegations of voter suppression. They say they are defending democracy. That can be true only if democracy is defined by the mere possibility of voting. It cannot be true when democracy is defined morally. Without a commitment to a moral principle — equality — a democracy can't be free, fair or full.