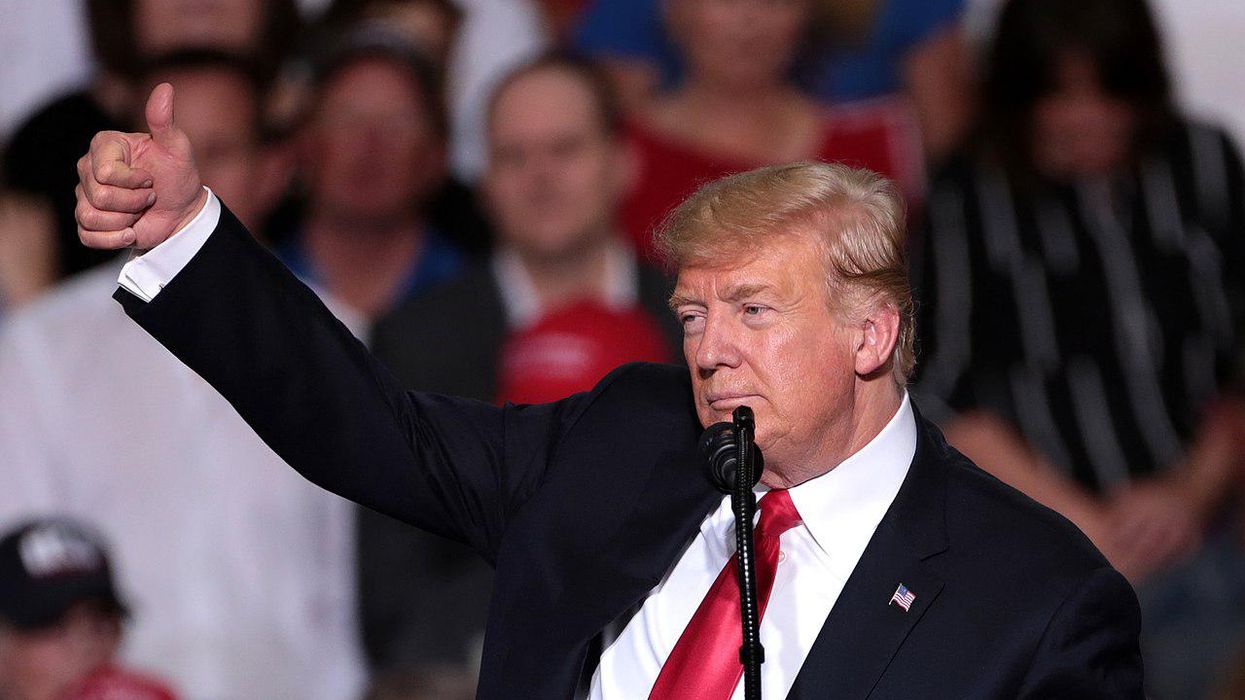 Donald Trump speaking at a MAGA rally in Arizona in October 2018, Gage Skidmore
Alex Henderson
May 17, 2021

Republicans in state legislatures all over the U.S. — from Florida to Texas to Arizona to Iowa — have been pushing voter suppression bills designed to make voting more difficult and inconvenient. Some of the bills have already been signed into law by GOP governors. But journalist Fred Hiatt, in an op-ed published by the Washington Post on May 16, stresses that voter suppression is not the worst part of these new bills or laws, which he warns are designed to make it easier for Republicans to steal elections in the future by rejecting any election results they don't like.

"President Donald Trump's effort to steal the 2020 presidential election fell short," Hiatt explains. "Now, Republicans across the country are promoting changes to laws and personnel that could allow him — or someone like him — to succeed in 2024."

Hiatt continues, "I'm not referring to the hundreds of GOP proposals in statehouses across the country that will make it harder for many people, in particular Black Democrats, to vote. Those measures are egregious and offensive. They are the strategy of a party that has given up on winning by putting forward more appealing policies and candidates and so hopes to win by keeping as many of its opponents away from the ballot box as possible. What I'm talking about is, in some ways, even more insidious: an insurance policy to potentially steal the election if the vote-suppression strategy fails."

Hiatt, who serves as editorial page editor for the Post, warns that Republican Trump supporters are trying to rid elections boards of people who insist on honoring democratic election results.

"Recall Trump's post-election campaign last fall," Hiatt observes. "Having lost decisively, he thought he could pressure local and state officials to nullify the results. He implored the Republican majority in the Pennsylvania legislature to defy their people's will and appoint a slate of electors who would vote for him in Washington. He urged the Georgia secretary of state to claim that Joe Biden's victory there was fraudulent. He pressured the Michigan Board of State Canvassers not to certify Biden's clear victory in their state. He failed because enough local officials had more integrity and courage than a majority of the Republican caucus in the U.S. House has mustered."

But in 2021, according to Hiatt, pro-Trump Republicans are looking for ways to prevent that from happening again.

"As they target the people and positions that stood in their way last time," Hiatt writes, "they also are attempting to change the rules so (that) a pro-Trump legislature could more easily override the will of the people — and the objections of any honest secretary of state who stood in the way."

Hiatt quotes a recent report titled "A Democracy Crisis in the Making," which was put together by the States United Democracy Center, Protect Democracy and the Wisconsin-based Law Forward.

The report warns, "In 2021, state legislatures across the country — through at least 148 bills filed in 36 states — are moving to muscle their way into election administration, as they attempt to dislodge or unsettle the executive branch and/or local election officials who, traditionally, have run our voting systems…. Had these bills been in place in 2020, they would have significantly added to the turmoil that surrounded the election, and they would have raised the alarming prospect that the outcome of the presidential election could have been decided contrary to how the people voted."

Six months after the 2020 presidential election, Trump and many of his allies continue to promote the Big Lie — and according to Hiatt, they are doing it in the hope of stealing the 2024 election.

"House Minority Leader Kevin McCarthy (Calif.) and most of his party have abjectly surrendered to the lie," Hiatt writes. "It's not just about history. The lie is being used to give cover for actions that in 2024, could turn the Big Lie into the Big Steal."