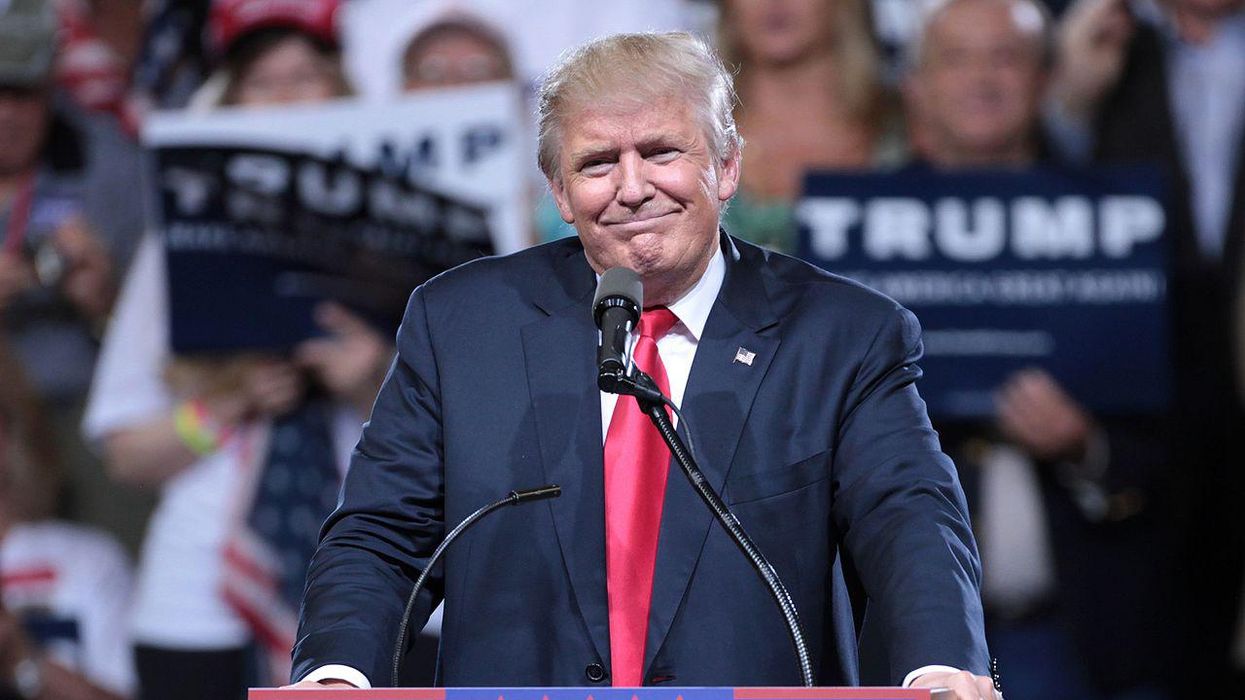 Donald Trump speaking at a campaign rally at Veterans Memorial Coliseum at the Arizona State Fairgrounds in Phoenix, Arizona in June 2016, Gage Skidmore
Alex Henderson
May 27, 2021

Former President Donald Trump is simultaneously among the most disdained and adored political figures in the United States, where millions of Democrats are delighted that he is gone from the White House while he maintains an iron grip on the Republican Party. Trump's company, the Trump Organization, is facing criminal investigations by Manhattan District Attorney Cyrus R. Vance, Jr. and New York State Attorney General Letitia James, yet Trump would likely receive the GOP nomination if he decided to run for president in 2024. And journalist Sofia Andrade, in an article published by Slate on May 26, addresses a hypothetical: would Trump be able to run for president if he were sent to prison?

Andrade explains, "Manhattan District Attorney Cyrus Vance, Jr. has convened a grand jury to hear evidence of potential financial malfeasance by former President Donald Trump and the Trump Organization, according to a report by the Washington Post. The news of the grand jury comes after an announcement by the New York attorney general's office that its civil probe of the Trump Organization has turned into a criminal one. Given that Trump has already hinted towards a 2024 reelection bid, the possibility of criminal charges opens up the door for Trump to be running a presidential campaign from behind bars —and for the slew of complications that can arise from doing that."

The Manhattan DA and New York AG investigations are not the only criminal probes Trump is facing. In Fulton County, Georgia, DA Fani Willis' office is investigating Trump's effort to overturn his election loss in Georgia — one of the states that went to now-President Joe Biden in 2020 — and bully Secretary of State Brad Raffensperger, a conservative Republican, into helping him "find 11,780 votes."

According to Kate Shaw, a professor at Yeshiva University's Cardozo School of Law in New York City, there is no law stating that someone who has been incarcerated cannot run for president.

Shaw told Slate, "When we're talking about federal office, the limitations would really be political, not legal. The Constitution actually is really clear about what the qualifications to run for president or a member of Congress or Senate are."

Trump hasn't been indicted in connection with the Vance, James or Willis investigations, but none of those probes would make it illegal for him to run for president in 2024.

Andrade notes that from a legal standpoint, Trump would be able to run for president regardless of his "carceral status."

"Furthermore," Andrade observes, "a state that tries to add a requirement to the presidency disqualifying candidates with criminal convictions from running would likely be shut down by the courts. That was the case in 2019, when the California Supreme Court ruled that a California law requiring presidential candidates to disclose their tax returns in order to be eligible to run for president — a direct challenge to President Trump's refusal to make public his own returns — was unconstitutional."

Andrade, delving into U.S. history, adds that "at least three incarcerated people have run for U.S. president before with no legal obstacles."

According to Andrade, "In 1920, Socialist Party leader Eugene V. Debs ran while incarcerated for charges related to his protesting against World War I. Another candidate, Lyndon LaRouche, ran in 1992 while incarcerated for tax evasion and mail fraud. And yet another, Keith Judd, managed to be included on the ballot — and win 41% of the vote against incumbent president Barack Obama — in West Virginia's Democratic primary while incarcerated as recently as 2012."

Lisa Marshall Manheim, who teaches at the University of Washington School of Law in Seattle, told Slate, "When Debs ran as a Socialist Party candidate…. he featured his conviction and incarceration as part of his political strategy. For example, his campaign handed out buttons referring to Debs as Convict No. 9653."

Shaw, however, told Slate that if Trump were to win the 2024 presidential election and be sentenced to prison, it would be unrealistic to think that he could perform his presidential duties while incarcerated.

Andrade explains, "In that instance, Shaw outlines three options: Trump could be impeached again, Congress could initiate 25th amendment proceedings to remove Trump from office, or Trump could present the case to the courts that his sentence must be suspended until after his term in office."