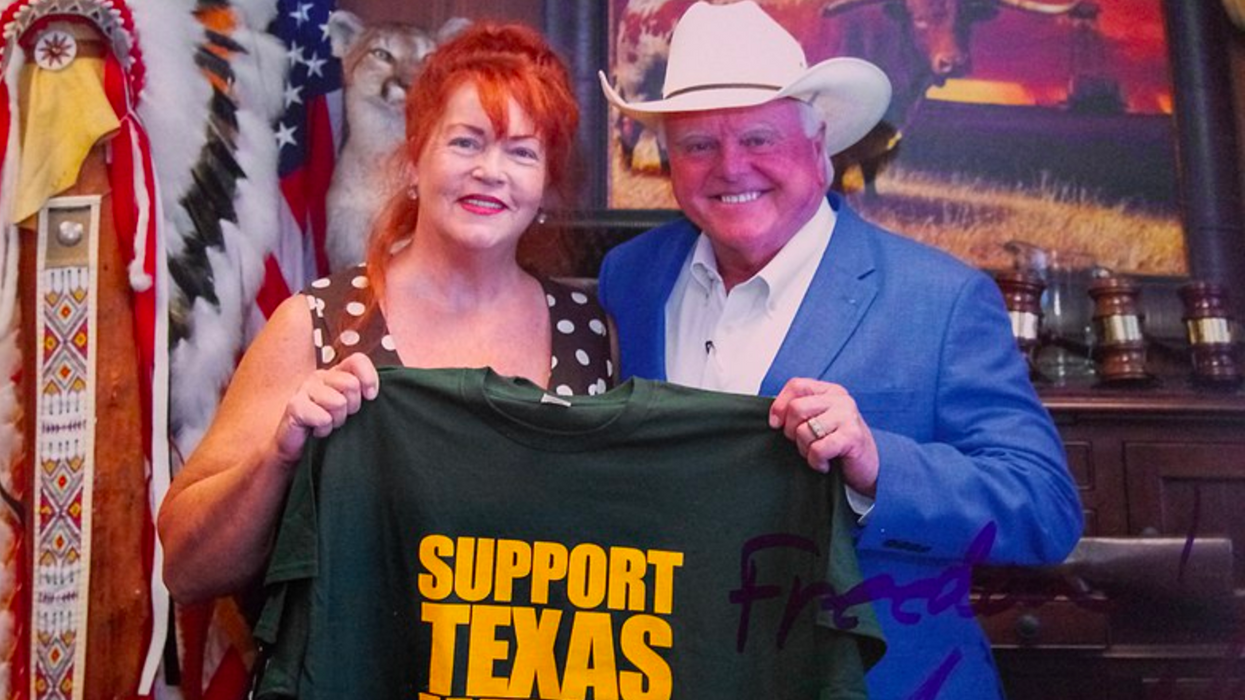 June 2019 meeting between Kathryn Mullen and Texas Agriculture Commissioner Sid Miller
Patrick Svitek
and
The Texas Tribune
May 09, 2021
"Top political aide to Texas Agriculture Commissioner Sid Miller arrested in alleged scheme to take money in exchange for hemp licenses" was first published by The Texas Tribune, a nonprofit, nonpartisan media organization that informs Texans — and engages with them — about public policy, politics, government and statewide issues.

The top political consultant to Agriculture Commissioner Sid Miller was arrested Thursday on allegations that he participated in a scheme to solicit money and campaign contributions for state hemp licenses issued by Miller's Texas Department of Agriculture.

The consultant, Todd Smith, ultimately took $55,000 as part of the scheme, an arrest warrant affidavit obtained by The Texas Tribune says. Smith and others involved in the scheme are alleged in the warrant to have solicited a total of $150,000 to guarantee a license, including a $25,000 upfront cost for a survey that they said was required to get a license in Texas. Some of the money would also go toward funding unnamed political campaigns, according to the affidavit.

“Todd Smith created by words and his conduct, a false impression of fact that affected the judgment of others in the transactions to obtain a hemp license and/or conduct a survey that was never attempted by Todd Smith," the affidavit says.

Smith did not immediately respond to messages seeking comment Friday morning. Miller told the Tribune on Friday afternoon that he "had no idea" about the alleged scheme.

"That was Todd, between him and his clients," Miller said, adding that he would reserve judgment until he could learn more about the situation.

Miller noted, however, that hemp licenses are not particularly expensive for those who want them, with farmers having to pay $100 for a one-year license.

Smith's arrest was part of an ongoing investigation by the Texas Rangers' Public Integrity Unit, which is responsible for looking into claims of public corruption.

Smith was arrested Thursday and booked into Travis County jail at 9:23 p.m., according to Kristen Dark, a spokesperson for the county sheriff's office. Smith was released at 2:59 a.m. Friday on a personal recognizance bond. Bail was set at $10,000.

The affidavit says Smith used another person as a middle man between himself and those interested in getting licenses. The affidavit does not provide much information about the middle man other than that he was “introduced to Todd Smith by a friend in August 2019."

The affidavit includes the account of one man who wanted to get involved in the hemp industry and met the middle man at a social gathering in August 2019. The affidavit says the middle man told the license-seeker that he was “working directly with senior leadership at the TDA" and that he “needed $150,000.00 in cash, with some of the money going toward campaign contributions, in order to receive the 'guaranteed' hemp license."

The license-seeking man agreed to the deal, setting off a chain of events that included a November 2019 visit to Austin where he handed the middle man $30,000 cash in a car outside El Mercado, a Mexican restaurant in downtown Austin near the TDA offices, according to the affidavit. Williams went through an alley to take the money to the TDA headquarters before returning to the car and collecting Vinson for a scheduled meeting at the offices.

The affidavit says the license-seeker learned later that month that he was not guaranteed a license, despite the scheme that had been proposed to him. He reached Smith via phone, who “denied any knowledge but did admit to receiving a $5,000.00 gift from" the middle man, according to the allegations.

The hemp licenses were opened as a result of House Bill 1325, which Gov. Greg Abbott signed into law in 2019 and allowed the state's farmers to legally grow industrial hemp. Hemp is a cousin of the marijuana plant that contains low levels of tetrahydrocannabinol, the psychoactive element in marijuana known as THC.

Smith has previously been under scrutiny for blurring campaign and official lines. The Austin American-Statesman reported in 2018 that Smith told a San Antonio businessman he could get a TDA appointment if he donated to Miller's campaign — then Smith asked the businessman for a $29,000 personal loan.

Years earlier, Miller created four new assistant commissioner positions and gave one of them to Smith's wife, Kellie Housewright-Smith. The positions had annual salaries exceeding $180,000, making them among the highest-paid employees at the TDA.

This article originally appeared in The Texas Tribune at https://www.texastribune.org/2021/05/07/sid-miller-todd-smith/.