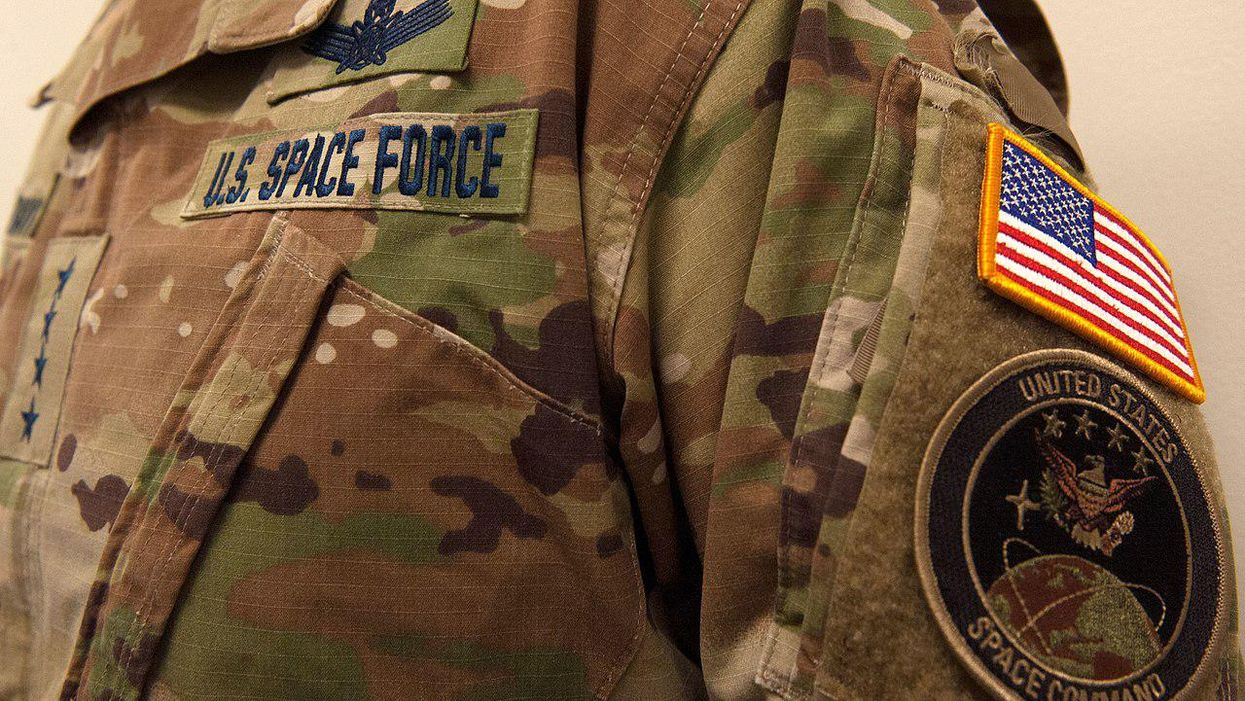 The combat uniform of the U.S. Space Force, Wikimedia Commons
Alex Henderson
May 17, 2021

Sounding like a combination of Sen. Joseph McCarthy, the John Birch Society and former President Donald Trump, Lt. Col. Matthew Lohmeier shows himself to be a full-fledged conspiracy theorist in his new self-published book, "Irresistible Revolution: Marxism's Goal of Conquest & the Unmaking of the American Military" — which claims that "Marxists" have invaded the U.S. military on a grand scale. And on Friday, May 14, Lohmeier was fired from his position at the U.S. Space Force for accusing the U.S. Department of Defense of pushing an agenda "rooted in Marxism."

Lohmeier's firing was first reported by Military.com, and the firing was confirmed by the Washington Post on May 16.

Post reporter Reis Thebault explains, "Lt. Gen. Stephen Whiting, the head of Space Operations Command, relieved Lohmeier of his command of a Colorado-based squadron that detects ballistic missile launches 'due to loss of trust and confidence in his ability to lead,' a Space Force spokesperson said in a statement."

Thebault quotes that spokesperson as saying, "This decision was based on public comments made by Lt. Col. Lohmeier in a recent podcast." And the spokesperson said that an investigation is being conducted to determine "whether these comments constituted prohibited partisan political activity."

Appearing on "The Steve Gruber Show," a far-right radio program, Lohmeier said, "What we saw taking place in the country and in the military, frankly, during this past year especially, was reminiscent of Mao's Cultural Revolution, where you had to toe a certain party line."

The "Mao" Lohmeier was referring to was obviously communist dictator Mao Tse Tung, who led the People's Republic of China before his death in 1976.

John Sipher, a former CIA operative, has called out Lohmeier's claims as ridiculous, tweeting, "We seem to have more and more people spouting off about Marxism, communism and socialism who don't seem to have a clue what they're talking about."

One of the people Lohmeier has accused of promoting "Marxism" in the military is Gen. Lloyd J. Austin, secretary of defense in the Biden Administration.

"I don't demonize the man," Lohmeier said of Austin during an interview with right-wing L. Todd Wood, "but I want to make it clear to both him and every service member that if we pursue this agenda, it will divide us. It will not unify us."

Lohmeier spent more than decade in the U.S. Air Force before joining the Space Force in 2020.