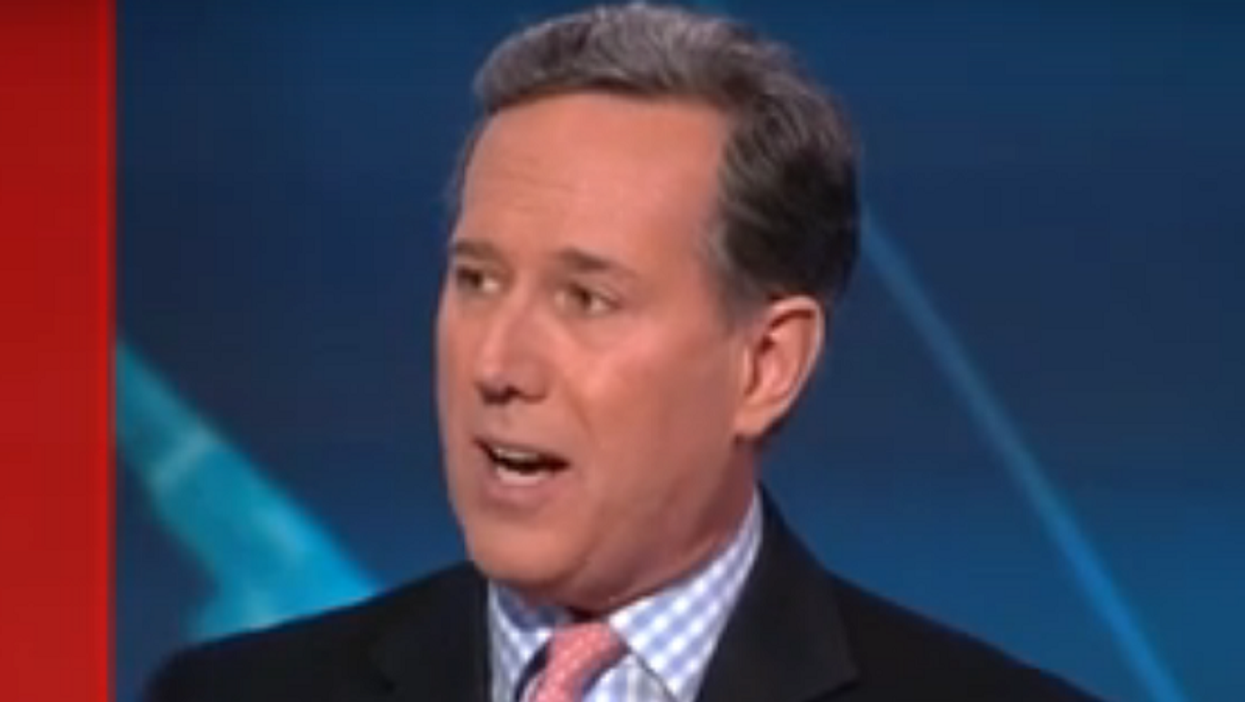 Whether borne of ignorance or malice — or likeliest, a malicious refusal to learn — these comments were jaw-droppingly racist and flat-out false.

Of course, Santorum has never been anything more than a mish-mash of ignorance and vile opinions. Putting him on TV was always a puzzling choice considering a visage that is supposedly that of a biological human being, but robotic enough to invoke the uncanny valley. Even by "white man failing up" standards, it was plain weird that CNN hired Santorum as a commentator in 2017.

It's understandable, then, that most of the reactions to Santorum's firing were of the "took you long enough" variety. He does not have anything interesting or important to say, ever, about anything, which seems like it should be disqualifying from a role as a handsomely paid pundit.

Still, I have some sympathies for the dilemma that CNN is facing. Santorum may be a stone-cold idiot and a bigot, but it's not like there are a lot of good options for the network — or any other mainstream media organization — when it comes to hiring pundits or opinion writers to articulate Republican beliefs for their audiences.

Media outlets face an increasingly difficult conundrum in trying to figure out what conservative voices to elevate. If a Republican is reasonable, then they're not really representative of true conservative thought in the modern U.S. If they are representative, however, they're going to be too stupid or bigoted — or, as Santorum shows, a combination of both — to put on the air.

In theory, the opinion side of any mainstream media outlet should run a reasonable spectrum of the diverse political opinions within American politics. Typically, opinion columnists at newspapers and pundits on cable news are meant to offer audiences a fair representation of the parameters of political debate inside the U.S. The far-right and far-left don't get much of a voice in these spaces, but ideally, someone watching or reading can get a pretty good measure of what is considered mainstream politics by perusing the opinions on offer.

Of course, the line between what is representative and what is prescriptive has always been blurry. Pundits are also supposed to represent the best version of their political views, more rational and defensible than the often incoherent mish-mash of opinions from real-world voters.

But what has happened over the past couple of decades in the GOP is that even the "best" versions of their beliefs have disintegrated, as the party increasingly rejects the very concept of facts and reasonable debate. The standard-bearer for the modern GOP is Donald Trump, a racist conspiracy theorist who rejects facts as "fake news." Opposing rational discourse in favor of disinformation is what the mainstream Republican Party stands for now. Trying to include them in normal political discussion is like opening a hive of bees at a dinner party. It's just not going to go well.

And there are no good answers to this dilemma.

Some outlets, such as the Washington Post, have prioritized rationality, filling their opinion pages with anti-Trump conservatives like Jennifer Rubin and Max Boot. But while such people are more pleasant to read, they are far more "fringe" within the GOP than the white supremacists and QAnoners that the party actually answers to. So there's a real risk that, by elevating never-Trumpers, mainstream outlets mislead audiences into believing that there are more "reasonable" Republicans than there actually are. At this point, the few remaining ones mostly live on the national opinion pages and don't have much impact on the party's direction on the ground.

But the other option — to hire people who more accurately represent what actual Republican voters believe — leads to hiring someone like Santorum, who has no regard for the norms of evidence, reason, or adherence to the facts that are supposed to guide democratic discourse. Networks like CNN just put a lying bigot on air, cutting against the media's duty to be informative and not misleading. It also inevitably leads to situations like the one that resulted in Santorum's firing, where the conservative pundit says something so repugnant and straight-up false that it can't be tolerated. It just also happens to be exactly the kind of opinion that the majority of Republican voters continue to hold.

The dilemma facing mainstream media outlets reflects that facing the country at large. Democracy doesn't work without rational political discourse. But nearly half the country rejects the concept of rational political discourse. Republicans are done with democracy, and turning towards authoritarian politics that reject rationality altogether, in favor of a politics of raw power and domination. They make a mockery out of other people's attempts to have a reasonable discussion, precisely because they want to bring an end to reasonable discussion.

The only thing that mainstream media outlets can do, in the face of this, is to call it out. Instead of trying to include people who reject the rules of debate, media outlets need to explain to viewers what's going on in the country: A fascist movement is rising, it's supported by the majority of Republicans, and they oppose the very democratic norms that are built into our media infrastructure.

There's good signs that more people in mainstream media get that there's no other way to move forward. Jake Tapper at CNN, for instance, is speaking out about the need to ban lying Republicans from being interviewed on-air. It's not ideal, but Republicans are increasingly forcing outlets to choose between representing conservative views and not being party to blatant disinformation. Given that stark choice, media outlets must put truth before representation.