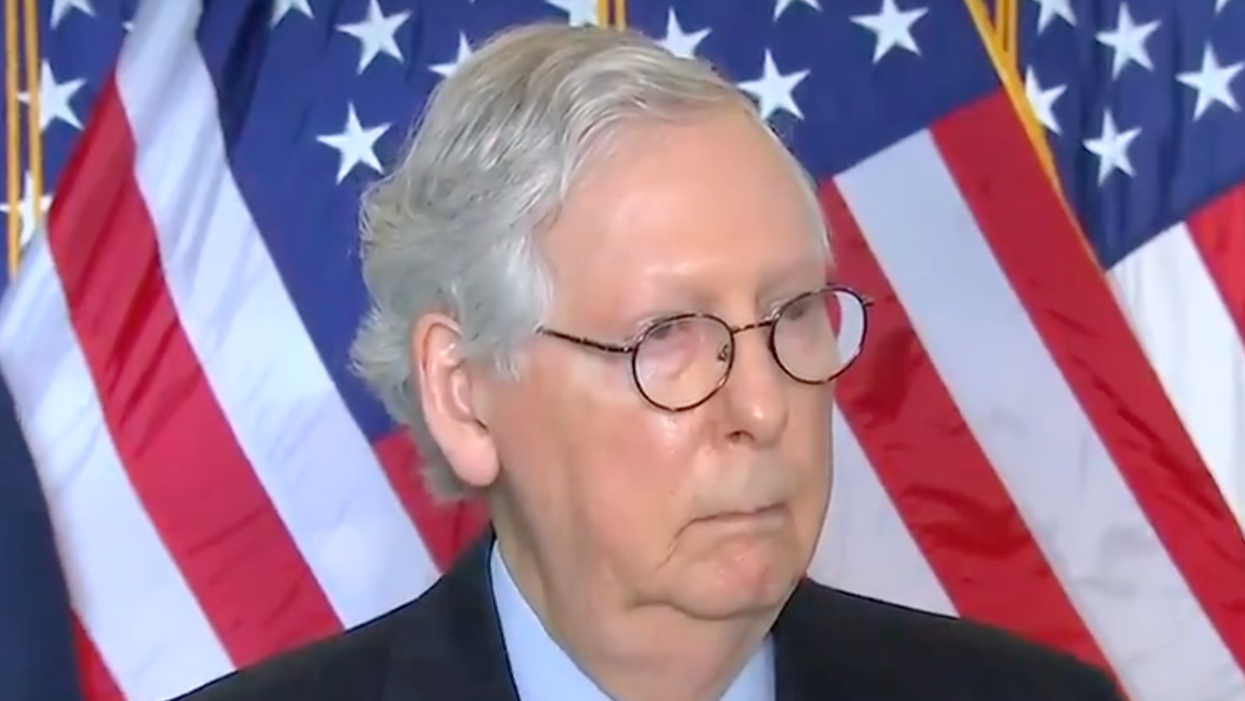 On Monday, the Associated Press released the results of its latest polling on the new president. Joe Biden enjoys an approval rating of 63 percent over four months. When it comes to his response to the covid, it's even better. Seventy-one percent of Americans give him a thumbs-up, including nearly half of Republicans (47 percent). The survey also "shows an uptick in Americans' overall optimism about the state of the country. Fifty-four percent say the country is on the right track, higher than at any point in AP-NORC polls conducted since 2017; 44 percent think the nation is on the wrong track."

This is one of two polling stories I want to share. The other poll was leaked to the Post over the weekend. A survey of battleground districts, it was conducted by the National Republican Congressional Committee (NRCC). Its results were reported during a recent gathering of GOP leadership, but a key part was suppressed. Why? Because it showed support for the former president is much softer than generally believed. "Trump's unfavorable ratings were 15 points higher than his favorable ones in the core districts, according to the full polling results … Nearly twice as many voters had a strongly unfavorable view of the former president as had a strongly favorable one."

It gets worse: "The internal NRCC poll partially shared with lawmakers in April found that President Biden was perilously popular in core battleground districts, with 54 percent favorability. Vice President Harris was also more popular than Trump, the poll showed. Biden's $1.9 trillion covid stimulus plan and his $2.3 trillion jobs and infrastructure package both polled higher than the former president's favorability, which was at 41 percent, compared to 42 percent in February" (my enthusiastic italics).

I'm the first to tell you to take any individual poll on anything with a healthy grain of salt. These polls in concert, however, suggest something fundamental about our politics. Two things. One, that Donald Trump's grip on the Republican Party may be getting tighter, but not where it's needed most. Two, and more importantly for our collective sanity, that Americans like it when elected officials tell them the whole truth. The former president told tens of thousands of lies. His approval rating never exceeded 50 percent. Biden mostly tells the truth.1 A majority of Americans now believes the country is headed in the right direction for the first time in four years.

Remember that lying is not just a matter of deceit. It's an injury. I mean this literally. Lies are intended to loosen our perception of reality. They make us feel crazy. Many Americans experienced a great sense of relief after Donald Trump left the White House. There's a very good reason for that. After being punched in the face every day, often many times a day, for four years, it felt fantastic after the punching stopped. I think the Washington press corps underestimates what swing voters2 are feeling right now and how they will respond to a political party waging war against the truth.

Not all lies are the same, of course. Most are small. Most, I'd say, are harmless. But the Republicans are not into small and harmless. They are embracing the big one—that Donald Trump is the legitimate president of the United States. That lie casts a shadow over everything, even those rare moments when the Republicans speak truthfully. Make no mistake. This is not about fear or cowardice. The big one is a conscious and rational choice. With the Democrats' razor-thin majorities in both chambers of Congress, the Republican leaders believe they have the advantage in the coming midterms. But they may not have considered a major risk. Going all-in on Donald Trump's Big Lie means injuring swing voters who already know the whole truth.

Congressional elections, or midterms, are usually referendums on the person sitting in the White House. When Trump was president, the House went to the Democrats in 2018. Now that Biden is president, the Republicans expect 2022 to be their year. But this dynamic depends on the incredibly short memories of voters. It depends on voters not comparing presidents but instead judging them in isolation. The Republicans, by going all-in on Trump, are threatening that dynamic entirely. They are threatening the historical advantage they have when voters forget. Instead, they're pushing Trump to the forefront of their minds. They're literally injuring them by repeating the biggest Big Lie. No one alive today has seen anything like this. No one has seen a major political party yoking its short- and long-term fate to the fate of a losing president.